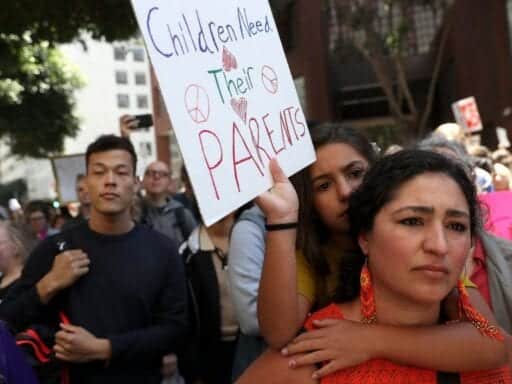 An official with the Department of Health and Human Services said they won’t be affected by Trump’s executive order.

President Donald Trump, facing fierce and widespread outrage, signed an executive order to end the large-scale practice of splitting up families at the US-Mexico border.

The administration will still pursue its “zero tolerance” crackdown and prosecute undocumented migrants for illegal border crossing, but it will now attempt to detain families together — and it looks to do so indefinitely.

The order doesn’t provide relief for the approximately 2,300 kids who have already been separated from their families since the administration’s policy was announced in early May. Those children will remain separated from their parents as they remain in federal custody and won’t immediately be reunited, according to a report in the New York Times.

“There will not be a grandfathering of existing cases,” Kenneth Wolfe, a spokesperson for the Administration for Children and Families, a division of the Department of Health and Human Services, told the New York Times.

“I can tell you definitively that is going to be policy,” Wolfe said.

Later, another spokesman for HHS, backtracked somewhat on the earlier statement, saying “it is still very early and we are awaiting further guidance on the matter.”

“Our focus is on continuing to provide quality services and care to the minors in HHS/ORR funded facilities and reunifying minors with a relative or appropriate sponsor as we have done since HHS inherited the program,” the statement read.

HHS sort of walks back earlier comments about not taking special steps to reunify families (https://t.co/2R601hawQa) and also seems to be suggesting here that reunification is the responsibility of some other agency. pic.twitter.com/9Lr7WjbNGE

These kids separated from their families are often brought to detention facilities, and then are placed with sponsors — either a relative or family friend in the US, or in foster care. It’s the same system used for unaccompanied minors, who travel to the US without parents or guardians.

The detention facilities themselves have generated condemnation, showing kids sitting behind cage-like chain link fencing or lying on mattresses with silver thermal blankets. Children have been housed in a converted Wal-Mart and in “tent cities.” Infants and toddlers have been taken from their parents, and brought to “tender age” shelters.

The separation of families was never intended to be permanent, but advocates and immigration lawyers say the government doesn’t have a coherent process of reuniting families — or even putting children and parents in contact while they’re separated. Parents have been deported, while children are left behind in the US. Some children are transferred thousands of miles away from the border — and their parents.

The Trump administration has halted the brutal practice of dividing parents and kids, which may reduce some strain on an already overburdened system. But it won’t erase the trauma many of these kids likely have experienced — and it’s not clear it will remedy the chaotic process of bringing families together, or even guarantee speedy reunification.

Update: This post has been updated with an additional statement from HHS.

Mike Bloomberg’s ad spend strategy is kind of working
Listen: Billie Eilish’s big 2020 continues with James Bond theme “No Time to Die”
From coast to coast, protests against police brutality and racism are still going strong
The House just passed a bipartisan bill to confront the opioid epidemic
VMAs 2018: 6 winners and 2 losers from a mostly lackluster show
A champion of the unplugged, earth-conscious life, Wendell Berry is still ahead of us