The 25th Amendment: The quickest way Trump could be stripped of power, explained 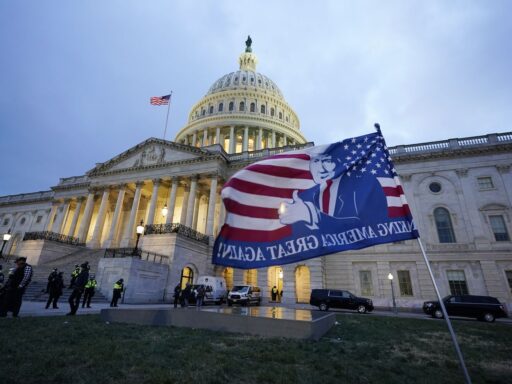 Vice President Mike Pence and the Cabinet could declare Trump “unable” to serve. But there are some complications.

Chaos at the US Capitol on Wednesday as a group of Trump supporters stormed the building and halted Congress’s count of the electoral votes has raised the prospect that President Donald Trump’s final two weeks in office could get much, much uglier.

Should Trump further escalate his attempts to hold on to the White House, there is a way for top officials to quickly strip him of the powers of the presidency: by invoking Section 4 of the 25th Amendment to the Constitution. And Marg Brennan of CBS reported Wednesday night that some Cabinet secretaries are indeed considering this, though it’s unclear how serious this effort is.

Section 4 has never been invoked. Before Trump, discussions of it mostly envisioned a president who became physically or mentally unwell (in the decades before it was ratified in 1967, several presidents had faced serious health problems). But due to Trump’s erratic governance, it’s come up often during his presidency — for instance, former Deputy Attorney General Rod Rosenstein discussed invoking it after Trump fired FBI director James Comey in 2017.

Since the crisis at the Capitol began earlier on Wednesday, there’s been renewed interest in the idea. Vermont’s Republican governor, Phil Scott, tweeted that Trump should either resign or be “removed from office by his Cabinet.” Jay Timmons, a former Republican operative now heading the National Association of Manufacturers lobbying group, also said Pence should “seriously consider” invoking the 25th Amendment.

Some members of Congress have called for a second impeachment of Trump as a way to remove him from the presidency before January 20 and to disqualify him from holding federal office in the future. But a number of congressional rules for how impeachment works could slow things down. If the House and Senate had unity in a crisis, they could change or disregard those rules. But Section 4 of the 25th Amendment is likely the faster solution — if enough members of Trump’s Cabinet agree, which is far from a sure thing.

How Section 4 of the 25th Amendment works

Section 4 empowers certain top government officials with the ability to make the assessment that the president is “unable to discharge the powers and duties of his office.”

The first person who has to be involved is Vice President Mike Pence — he has to be on board. And Pence needs to have a majority of “the principal officers of the executive departments” joining him.

A 1985 opinion from the Justice Department’s Office of Legal Counsel interpreted that reference to “principal officers” to refer to the core Cabinet secretaries (rather than other Cabinet-level officials without secretary titles).

Currently, there are 15 such secretaries, though three are holding their posts on an acting basis. (It’s not clear whether “acting” officials get a say here, but the Office of Legal Counsel advised making sure to have a majority both with them and without them, just to be safe.) They are:

So, Mike Pence and a majority of that group (at least 8 out of 15 people, maybe with an extra cushion if some of those are “acting”) would have to sign on to a “written declaration” that Trump is unable to discharge the powers of his office. (The Office of Legal Counsel says they don’t have to physically sign it, just “direct their names to be added to the document” in “a reliable fashion.”)

And if they do that, and send that declaration to House Speaker Nancy Pelosi and Senate president pro tem Chuck Grassley, Trump loses his powers, making Pence acting president.

Trump would still technically hold the title of the president, but he wouldn’t have legal authority to actually do anything anymore. (At least, that’s how it should work in theory — if Trump tried to totally ignore this, we’d be headed into fully illegal territory, and who knows how it will play out.)

If Trump is stripped of his powers, Section 4 also provides a way he can try and get them back.

First, Trump has to send his own written declaration to Pelosi and Grassley that “no inability exists.” But then, the Vice President and Cabinet have four days in which they can reiterate their declaration that Trump is unable to serve. If they do so, per the amendment, “Congress shall decide the issue.”

Congress would then have 21 days to consider the matter. If, in that timespan, two-thirds of both the House and Senate vote that Trump is in fact “unable,” he will remain powerless. If not, he gets his powers back.

Interestingly, that 21-day specification means that, in the current situation, Congress wouldn’t have to do anything at all — Trump’s term in office expires in 14 days, at noon on January 20.

So Pence, plus about eight Cabinet secretaries, have the full authority to strip Trump of his powers for the rest of the term, if they want to do so. That is one legal and constitutional failsafe that remains to them — if things get truly out of control and they decide enough is enough.

The $1,200 coronavirus checks, explained
“Susan Collins consents”: The Wall Street Journal’s real, terrible Kavanaugh headline
Trump’s shocking Syria decision and confusing aftermath, explained
A Senate primary to watch on March 10
The Trump Foundation was a sham. We have no idea how many other foundations are, too.
A Trump appointee at the CIA urged the Justice Department to investigate Trump on Ukraine