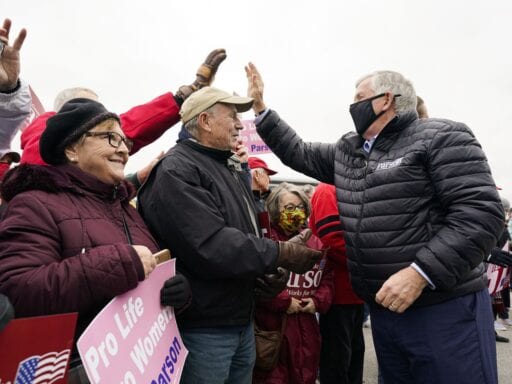 Eyes will be on Montana, Missouri, and North Carolina.

As much change as the 2020 election might bring on a national level, it’s unlikely to shake up many states’ leadership: Of the 11 states with governor races in 2020, nine have incumbents running for reelection, many of whom are expected to coast to victory.

That makes Montana, where current Democratic Gov. Steve Bullock is leaving the seat open to run for US Senate, one of the cycle’s most interesting gubernatorial races — and the only one that 270towin.com rates as a true toss-up. Bullock’s lieutenant, Mike Cooney, is running against the current US House member in Montana’s at-large congressional district, Republican Greg Gianforte.

The race is interesting on its own merits. The two men represent sharply different political styles: Cooney is a longtime state official who embraces retail politics and classic Montanan issues; Gianforte, a conservative who’s aligned himself with President Donald Trump, is perhaps best remembered for the night in 2017 before he won his special election, when he body-slammed a reporter from the Guardian and was charged with misdemeanor assault.

Montana, however, isn’t the only race worth keeping an eye on.

North Carolina is one of three states where the governor and lieutenant governor belong to different parties. The race there is between Democratic incumbent Roy Cooper and his Republican lieutenant Dan Forest. Most polls show Cooper in the lead, but an upset is certainly possible, especially if Trump and Republican Sen. Thom Tillis perform well.

Missouri, meanwhile, is sort of the opposite of North Carolina: There’s a Republican incumbent — one of six running for reelection in 2020 — but unlike many of his peers, Mike Parson is in for a tougher-than-expected fight. Parson took office in 2018 after Eric Greitens resigned, so this is his first true election. His opponent, Nicole Galloway, is the state auditor, the only woman and the only Democrat currently holding statewide office in Missouri. Trump is expected to carry Missouri comfortably, but Parson might not have the same luck, due in large part to his botched response to the Covid-19 pandemic.

Eight other states have gubernatorial elections this year, but few hold surprises. Republicans hold a 26-24 edge in control of governors’ mansions around the country, and many of their six incumbents up for reelection this year are expected to win. Hillary Clinton won Vermont by 27 points in 2016, but Republican incumbent Gov. Phil Scott is a heavy favorite. A similar situation is playing out in New Hampshire, where Republican Chris Sununu is comfortably leading in the polls. Republicans are expected to easily hold seats in Utah, North Dakota, West Virginia, and Indiana; Democratic incumbents in Washington and Delaware are also safe.

Here are the governor races to watch.

A lot of money has gone into this race — the Republican Governors Association, seeing Missouri as a must-hold, has given $11 million to a pro-Parson PAC, while the Democratic Governors Association has spent $4.35 million on the race, according to the St. Louis Post-Dispatch. Parson is leading in the polls, but by a significantly narrower margin than the nearly 19-point margin Trump carried the state in 2016. Galloway, the state auditor, has run an inspired campaign — Christina Amestoy, a spokesperson for the DGA, told The 19th* that “you could write down a dream candidate on paper, and Nicole Galloway would still be better.”

Parson was among the last governors to institute a lockdown in the spring due to the Covid-19 pandemic, and among the first to reopen. Missouri never had a mask mandate, and Parson and his wife tested positive for Covid-19 in September. His campaign did not respond to a request for comment.

“The governor has taken a very hands-off approach to dealing with this pandemic,” a spokesperson for Galloway’s campaign told Vox. “Most governors have looked at this crisis and taken action and put in place a mask mandate, and used their bully pulpit to lead. Parson has been very reluctant to do that.”

Missouri’s Covid-19 situation has worsened significantly since the summer. On July 1, the state saw 320 new cases, but by July 31, that number skyrocketed to 1,403. Despite occasional periods of improvement, the situation has only deteriorated: As Vox’s Dylan Scott wrote earlier this week, “hospitals in Kansas City, Missouri, are reportedly turning away ambulances because they don’t have any beds available.”

Galloway has outlined a detailed plan for combating Covid-19 — she would implement a statewide mask mandate, cooperate with other states to purchase rapid testing supplies, use a data-driven approach to reopening schools, and form an emergency medical task force.

At the presidential level, Montana consistently votes Republican. But down-ballot races can be more competitive; Sara Rinfret, a Montana pollster and a professor at the University of Montana, told Vox the state is strongly independent.

“I often categorize Montana as purple,” Rinfret said. “We don’t register for party in this state, so during the primary, you get both ballots and you pick which one you want to vote for. People vote depending on what’s going on at the time.”

Case in point: Montana has had a Democratic governor, Steve Bullock, for the past eight years, and a Democratic US senator, Jon Tester, since 2007. Bullock is now running for the other US Senate seat, against incumbent Republican Steve Daines, leaving an opening in the governor’s mansion.

According to Rinfret, Lt. Gov. Mike Cooney and US Rep. Greg Gianforte are in a dead heat. Gianforte was elected to Congress in a 2017 special election — the night after he body-slammed a reporter. Trump praised him for doing so, saying at a 2018 rally in Montana that “any guy who can do a body slam, he is my type!”

Cooney, a fourth-generation Montanan whose children all live in the state, has worked to paint Gianforte, a multimillionaire who was born in San Diego and lived for several years in New Jersey, as not sufficiently Montanan. The Gianforte campaign could not be reached for comment.

As Kathleen McLaughlin wrote for the Washington Post, the race could have big implications for a state where “political attitudes often vary starkly by location”:

Democrats have occupied the governor’s office for the past 16 years, yet with a Republican-controlled legislature likely to hold, a Republican governor could undo more moderate policies on health care, public schools funding and labor protections.

The presidential and Senate races in North Carolina are both expected to be tight, and the governor’s race, where incumbent Democrat Roy Cooper is fighting off a challenge from his own second-in-command, should be close, too. Director of Emerson polling Spencer Kimball said their most recent survey of the state shows Cooper leading Dan Forest by 4 points, down from eight in a previous poll.

Cooper received positive reviews for his response to Covid-19. He closed restaurants and bars on March 17 and has generally provided solid leadership. Forest, meanwhile, has been holding in-person events for much of the year, many of them indoors with few masks and little or no social distancing.

“There’s well over 50 [campaign] events at this point,” a spokesperson for Cooper’s campaign told Vox. “Just a total lack of regard for any safety measures at all, and it’s been really sort of reckless and crazy to see. That is totally his campaign strategy — pretend like the pandemic doesn’t exist.”

Forest’s campaign did not respond to a request for comment, but he has said he will prioritize getting North Carolinians back to work, reopening schools, and supporting law enforcement.

North Carolina has a divided government, with Republicans in control of both houses of the state legislature. Both US senators are also Republicans, as are nine of 13 US House members (one district is currently vacant). President Trump and former Vice President Joe Biden have both campaigned extensively in North Carolina, and with an important Senate race between incumbent Republican Sen. Thom Tillis and Democrat Cal Cunningham, voter turnout is expected to be high, which could help Cooper maintain his post.