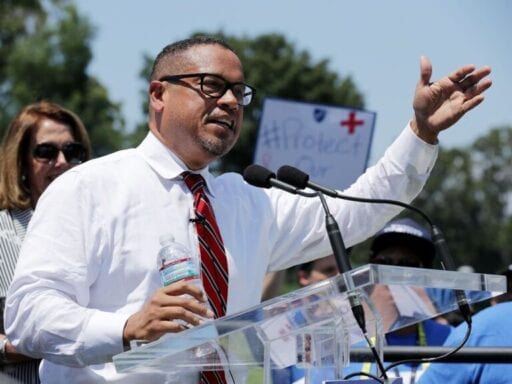 Charges against Chauvin will be escalated to second-degree murder.

Minnesota Attorney General Keith Ellison is increasing charges against Derek Chauvin to 2nd degree in George Floyd’s murder and also charging other 3 officers. This is another important step for justice.

Shortly after Chauvin was arrested on the lesser charge of third-degree murder, Floyd’s family expressed disappointment, stating through their attorney that “we expected a first-degree murder charge” and that “we want to see the other officers [involved in Floyd’s death] arrested.” All four officers were fired from the police force shortly after Floyd’s death.

The primary difference between second- and third-degree murder charges is that second-degree murder ordinarily requires prosecutors to prove that a criminal defendant intended to kill their victim — although someone can also be convicted of second-degree murder if they kill someone “while committing or attempting to commit a felony offense other than criminal sexual conduct in the first or second degree with force or violence or a drive-by shooting.”

Third-degree murder, by contrast, applies to someone who “causes the death of another by perpetrating an act eminently dangerous to others and evincing a depraved mind, without regard for human life.” Prosecutors do not have to prove that the defendant intended to kill the victim in order to obtain a third-degree murder conviction.

Video shows Chauvin, who is currently under arrest on murder and manslaughter charges, pinning Floyd’s neck to the ground with his knee, as two of the other officers help restrain Floyd and a third looks on. According to the Hennepin County prosecutor’s office’s original document laying out its charges against Chauvin, the former officer “had his knee on Mr. Floyd’s neck for 8 minutes and 46 seconds in total,” including two minutes and 53 seconds when Floyd was nonresponsive.

After Chauvin’s arrest, however, Gov. Tim Walz (D) decided to transfer the prosecution from the county prosecutor’s office to the state attorney general’s office. He did so at the urging of Floyd’s family, local activists, and some members of the Minneapolis City Council. In response to the new charges, Floyd’s family said they are “deeply gratified” by Ellison’s actions, in a tweet from their attorney Benjamin Crump.

FAMILY’S REACTION: This is a bittersweet moment. We are deeply gratified that @AGEllison took decisive action, arresting & charging ALL the officers involved in #GeorgeFloyd‘s death & upgrading the charge against Derek Chauvin to felony second-degree murder. #JusticeForGeorge pic.twitter.com/jTfXFHpsYl

The new charges elevate the potential consequences for Chauvin and his alleged accomplices. While third-degree murder carries a maximum sentence of 25 years, the second-degree charge carries a maximum penalty of 40 years of imprisonment.

The other three officers, meanwhile, are potentially in just as much jeopardy as Chauvin. Under Minnesota law, “a person is criminally liable for a crime committed by another if the person intentionally aids, advises, hires, counsels, or conspires with or otherwise procures the other to commit the crime.”