The 4 fights that make up the Medicare-for-all debate 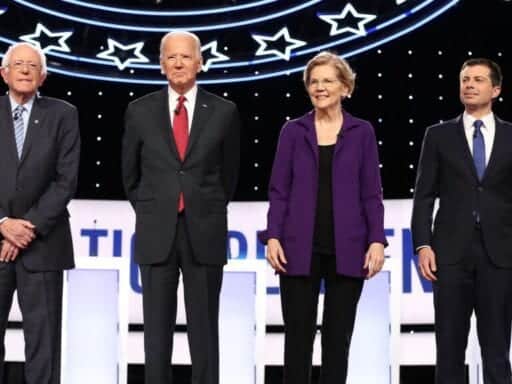 A guide to the discourse around paying for Medicare-for-all.

Last Friday, Sen. Elizabeth Warren answered a question pundits and Medicare-for-all skeptics have been hounding progressives with for years: How will you pay for it?

After Democratic presidential debate moderators asked whether single-payer health care would raise taxes on the middle class for what felt like the umpteenth time, Warren put out a plan. She says she will not increase taxes on the middle class but create an “employer Medicare contribution,” and the plan ultimately estimates Medicare-for-all would bring in savings that would offset some costs. (There are also offsets from other policies, including Warren’s proposed wealth tax, comprehensive immigration reform, and better tax enforcement included in the plan.)

Sen. Bernie Sanders, who wrote the original Medicare-for-all bill, has never answered the question of how to pay for it — and has said he doesn’t plan on doing so in the near future. His single-payer legislation came with an attached white paper of possible revenue raisers, including an employer-side payroll tax, a wealth tax, closing certain tax loopholes for the very rich and so on. It covers about half the estimated cost.

Warren took a different approach, and her plan has ignited a lot of debate. At this point there are four separate questions that define the debate around Medicare-for-all’s cost. Here’s a rundown.

1) How much would Medicare-for-all actually cost?

Several studies have tried to price out how much the government would have to increase federal spending to pay for a single-payer health care system.

The most recent analysis from the Urban Institute estimated it would require $34 trillion in additional federal spending over 10 years, and cost $59 trillion over a decade. Under current law, the study found, employers, individuals, and state and federal governments would spend $52 trillion over the next decade on health care.

The $7 trillion difference, according to the study, is because people would use the health care system more if everyone were insured.

Warren’s cost estimate (by Don Berwick, Obama’s director of the Centers for Medicare and Medicaid Services; and Simon Johnson, the former chief economist at the World Bank) argues that the overall cost of Medicare-for-all would be the same as the current system.

The estimate does this by, essentially, being optimistic about savings: Warren argues single-payer would significantly cut down administrative costs and waste to the tune of $2 trillion, more than any public study has suggested, and that drug prices would be cut by 70 percent (the Urban Institute study assumes a 30 percent cost cut). She says hospitals will be paid at 110 percent of what Medicare currently pays. And she says that health care costs won’t grow as fast in the United States as the government is currently projecting it to grow.

Her numbers have come under intense scrutiny from those that have worked on this issue.

“We did not think those levels were realistic,” Linda Blumberg, an analyst at the Urban Institute who co-authored the report that Warren cites in her plan, told the Washington Post. “They are assuming they could do better on a number of costs than we thought was likely to be possible.”

Democratic presidential candidate Sen. Michael Bennet (D-CO), who has put out legislation for a public option plan — Medicare X — blasted Warren’s math saying, “Warren’s new numbers are simply not believable, and have been contradicted by experts. Regardless of whether it’s $21 trillion or $31 trillion, this isn’t going to happen, and the American people need health care.”

Former Vice President Joe Biden said simply that Warren was “making it up” in an interview with PBS Newshour. His deputy campaign manager also called out the math: “The mathematical gymnastics of this plan are all geared towards hiding a simple truth from voters: it’s impossible to pay for Medicare for All without middle class tax increases,” Kate Bedingfield said.

There is another separate debate about how to actually raise $20 trillion in federal revenue. It comes down to the lynchpin of Warren’s plan: a “employer Medicare contribution” where companies required to offer health insurance under Obamacare pay 98 percent of their per-employee health care costs to the federal government.

Sanders has backed a payroll tax, as is used to pay for Social Security and Medicare currently. The difference is that Warren’s plan would eventually have companies pay the same contribution rate for every employee, regardless of their salary, whereas Sanders’s proposal leads to bigger contributions for employees with bigger salaries.

Sanders said his proposal — that his Senate office included in a bullet point list attached to the text for his Medicare For All bill — is “far more, I think, progressive, because it’ll not impact employers of low wage workers but hit significantly employers of upper income people.”

But as Matt Yglesias explained, this plan allows for Warren to make the claim that she isn’t establishing a whole new tax.

3) Should Democrats be debating this right now at all?

Another debate, which shows a divide between Warren and Sanders, is whether Democrats should be having this debate at all. Warren clearly saw the need to answer the question about how to pay for Medicare-for-all — and was criticized for it. Sanders himself however has explicitly stayed away from specifics — and been criticized for it, as well.

There’s an argument for both sides. Warren has branded herself as a plans candidate, and been hit for not having her own plan on health care. So she developed one with former Obama advisers that fills that gap. And even some Medicare-for-all skeptics have praised her for that.

“It shows that Democrats have this seriousness of policy that we are not seeing from Republicans,” Zach Moller, with the centrist think tank Third Way said. “That’s a really good thing.” That said, Moller added, that these are extremely politically contentious debates ultimately decided in Congress. (Congress is much better at cutting taxes than raising them, and increasing government spending than cutting it. And needless to say, Medicare-for-all is going to see some serious challenges passing either chamber of Congress.)

Medicare-for-all has grown in popularity, but it is not the most popular health care proposal out there. Advocates still see a lot of persuading to do — and it’s an open question whether it’s worth it to have a potentially politically toxic debate a that ultimately will mean not very much legislatively.

“Now you are asking me to come up with an exact detailed plan…I don’t think I have to do that right now,” Sanders told MSNBC’s John Harwood. “All that I’m saying is what we have laid out is a variety of options that are progressive, and we are going to take those and have that debate.”

Sanders added that “the fight right now is to get the American people to understand that we are spending twice as much per capita, that of course we are paying for it.”

In other words, he’s still concerned with persuading Americans that Medicare-for-all is the best path forward, instead of having a tricky debate about how to pay for it.

4) Is Medicare-for-all just too expensive?

Finally, there’s a perennial criticism of single-payer health care: that Medicare-for-all is just really expensive, point blank, for the federal government. This is hard to shake. It is true Medicare-for-all is far more expensive than plans that would build out public options.

By comparison, South Bend, Indiana, Mayor Pete Buttigieg’s “Medicare For All Who Want It” plan, which establishes a public option, is estimated to cost $1.5 trillion over 10 years, according to Buttigieg’s campaign. Joe Biden’s public option has a $750 billion price tag over a decade.

In a way, this is the simplest of the four debates to follow. It’s where advocates of Medicare-for-all pose a basic question about a moral problem: Can a health care system in which private insurance plays a significant role incentivize giving sick people care? Those like Sanders and Warren say no. But there are those in the debate who argue that it makes much more sense to just expand the existing public programs on the margins.

This fundamental question underlies the whole discourse around Medicare-for-all.