The 4 possible crimes in the Trump-Ukraine scandal, explained 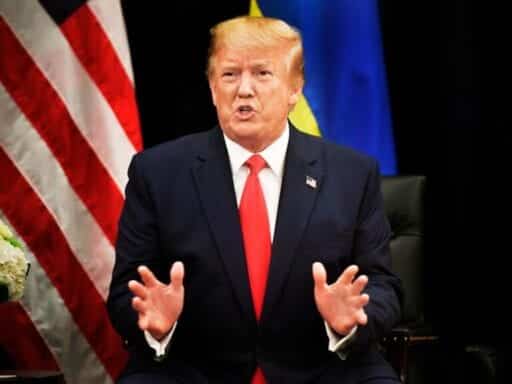 Based on what we know so far, Trump and his top aides could be implicated in four different types of federal crimes.

The events of the past 48 hours bring up a simple question: Based on what we know about the Ukraine-Trump saga, could any of the key players be charged with a crime?

Allegations of wrongdoing are flying around — a record of a July 25 phone call between President Donald Trump and Ukrainian President Volodymyr Zelensky reads more like a mafia shakedown than a conversation between two world leaders. Trump asks Zelensky to do him a “favor,” i.e.: dig up dirt on his political rival Joe Biden. Trump then suggested that Zelensky take this offline and talk with his personal lawyer, Rudy Giuliani, and US Attorney William Barr about it. In the background, Trump had frozen American aid to Ukraine, a strong-arm move that some on the internet pointed out would make Tony Soprano proud.

A day later, a whistleblower’s report was declassified and made available to the public. Among other things, the anonymous author said he feared that White House officials tried to conceal Trump’s conversation with Zelensky by placing the transcript of the call on a “separate electronic system that is otherwise used to store and handle classified information of an especially sensitive nature.”

All of this was just in time for acting Director of National Intelligence Joseph Maguire to spend much of his day Thursday being grilled by members of the House Intelligence Committee about whether he helped cover up this report.

A lot of Americans seem to think this is bad stuff. Already polls show a spike in support for impeaching the president. But is any of it illegal?

It’s worth noting that the House, which has the sole power to impeach a president, can do so without a finding of criminal wrongdoing by the president. In other words, a president who hasn’t violated the law can still be impeached for “high crimes and misdemeanors,” a term that includes many actual federal crimes, but that also includes what Alexander Hamilton described as “abuse or violation of some public trust.”

That said, it’s nonetheless important to know if the president and his associates broke the law. I spoke with four legal experts about the developments in the whistleblower scandal so far. Based on those conversations and other analysis that’s been published so far, four areas of federal criminal law could be troublesome for Trump, Barr, and Giuliani, based on what we know: statutes dealing with campaign finance, bribery, extortion, and obstruction of justice.

Did Trump or his associates violate campaign finance law?

Federal law makes it illegal to “solicit, accept, or receive a contribution or donation” from a foreign national. The question of whether or not the president ran afoul of that law certainly seems in play in light of what we saw in the transcript.

For purposes of this statute, a “contribution or donation” is defined as “money” or another “thing of value.” So a prosecution of Trump would hinge upon whether the opposition research Trump sought on Biden constitutes such a “thing of value.” Barr and Giuliani, meanwhile, could be considered accomplices in Trump’s effort to obtain opposition research from Ukraine’s president.

The Justice Department reportedly has already decided that this statute does not apply to Trump’s actions. According to BuzzFeed’s Zoe Tillman, DOJ’s “Criminal Division explored whether the July call merited opening a criminal investigation into potential campaign finance violations by the president.” But the DOJ ultimately concluded that “the information discussed on the call didn’t amount to a ‘thing of value’ that could be quantified, which is what the campaign finance laws require.”

Special counsel Robert Mueller, however, disagreed with this interpretation of the statute after a similar issue arose in his investigation of Russia’s interference in the 2016 campaign.

“Political campaigns frequently conduct and pay for opposition research,” he noted. Moreover, “a foreign entity that engaged in such research and provided resulting information to a campaign could exert a greater effect on an election, and a greater tendency to ingratiate the donor to the candidate” than if they gave the candidate money. The idea that opposition research isn’t a thing of tremendous value to political candidates ignores very basic realities about how political campaigns operate.

Even if Mueller’s argument prevails in the courts, however, a prosecution of Trump, Barr, or Giuliani would still need to overcome other hurdles. Among other things, any information obtained from a foreign national must be worth at least $2,000 to make a violation of the campaign finance statute a crime, and at least $25,000 to make it a felony. So, while Mueller’s interpretation may be correct, prosecutors would still need to prove that any information Trump obtained from Ukraine would meet this threshold.

Prosecutors might also look to a federal anti-bribery statute, which imposes criminal sanctions on a public official who “corruptly demands, seeks, receives, accepts, or agrees to receive or accept anything of value personally or for any other person or entity, in return for … being influenced in the performance of any official act.”

Any prosecution under this statute would raise similar issues to the ones that arise under the campaign finance law. Does opposition research constitute “anything of value”? Ultimately, that question would need to be resolved by the courts.

Additionally, prosecutors would need to prove that Trump committed an “official act” in return for the opposition research against Biden. And, in its 2016 decision in McDonnell v. United States, the Supreme Court defined the term “official act” very narrowly.

Yet the Supreme Court tossed out McDonnell’s conviction, holding that these favors did not constitute an “official act.” The law, according to McDonnell, prohibits “prohibits quid pro quo corruption.” And the favors McDonnell did for his benefactor — “hosting an event, meeting with other officials, or speaking with interested parties” — were not enough to constitute such corruption. Prosecutors needed to show that McDonnell agreed to make an actual policy decision in return for a bribe, or that the governor somehow pushed another official to make such a policy decision.

Which brings us back to Trump’s phone call with Zelensky. There’s an argument that Trump’s actions are criminal, even under the McDonnell framework. If prosecutors can show that Trump agreed to provide aid to Ukraine in return for opposition research on Biden, that would arguably clear the bar set in McDonnell.

Nevertheless, prosecutors struggled to meet this high bar in another, high-profile corruption case. Sen. Bob Menendez (D-NJ) allegedly received paid vacations and other gifts from a wealthy doctor in return for Menendez allegedly pressuring government agencies to take actions that would benefit that doctor.

But the case ended in a mistrial, and the Justice Department eventually decided to abandon the case.

Did he commit extortion?

Writing in the Daily Beast, former United States Attorney Barbara McQuade points to the Hobbs Act, a federal anti-extortion law, as another possible source of criminal liability against Trump.

The Hobbs Act prohibits actions that “in any way or degree obstructs, delays, or affects commerce or the movement of any article or commodity in commerce, by robbery or extortion.” The word “extortion,” is defined as “obtaining of property from another, with his consent, induced by wrongful use of actual or threatened force, violence, or fear, or under color of official right.”

The magic words here are “under color of official right.” This language refers to public officials who use their office to pressure another person. As the Supreme Court’s explained, to show that a criminal defendant acted under color of official right, “the Government need only show that a public official has obtained a payment to which he was not entitled, knowing that the payment was made in return for official acts.”

Thus, if Trump blocked military assistance to Ukraine in order to extract a payment from that country, that could form the basis for a Hobbs Act prosecution.

That said, the Hobbs Act also defines extortion as “the obtaining of property from another.” So a Hobbs Act prosecution could hinge on whether opposition research against Biden constitutes “property.”

Did he obstruct justice?

Several other federal laws make it a crime to tamper with documents related to a federal investigation. One statute, for example, imposes criminal liability on anyone who “knowingly alters, destroys, mutilates, conceals, covers up, falsifies, or makes a false entry in any record, document, or tangible object with the intent to impede, obstruct, or influence” a federal investigation. If Trump or one of his associates committed such an act to cover up other potentially criminal activity, they could face prison time (though, again, any prosecution of Trump would have to wait until he leaves office).

At this stage, however, we can’t know for sure whether such a cover up took place — although a whistleblower accused White House officials of moving the transcript of Trump’s call with Zelensky to a “separate electronic system that is otherwise used to store and handle classified information of an especially sensitive nature.” The White House, in other words, may have tried to shield Trump from political damage by hiding the transcript behind the wall of security normally afforded to the most sensitive national security information.

Whether this attempt to conceal the transcript was done at Trump’s behest, and whether it was done specifically to obstruct a federal investigation, are not yet known. So it remains to be seen whether an obstruction case could be built against Trump or against other Trump administration officials.

A long way to go

The criminal case against Trump and his closest associates, in other words, remains uncertain. Again, the DOJ’s Office of Legal Counsel has held that a sitting president cannot be prosecuted, so at least in Trump’s case, any criminal case would have to come when he’s out of office.

Whether Trump will ultimately face criminal charges when he’s no longer in office will turn on as yet unknown facts, on how courts resolve untested questions of law, and on whether prosecutors want to roll the dice on a conviction in the face of such uncertainty. It could also turn on whether the next administration wants to deal with the political circus that would arise from prosecuting a former president.

All of this uncertainty, moreover, helps demonstrate why the impeachment power reaches broadly to allow a public official to be removed for non-criminal acts. As Justice Joseph Story said in 1833, “political offences are of so various and complex a character, so utterly incapable of being defined or classified, that the task of positive legislation would be impracticable, if it were not almost absurd to attempt it.”

Congress cannot possibly anticipate in advance every single way that a public official may betray the nation’s trust. And so the Constitution does not make impeachment contingent upon whether a prosecutor could prove that the president committed a specific crime.

The best $1,600 I ever spent: A handmade bookshelf
This former governor pardoned a man convicted of raping a child. His reasoning was deeply flawed.
The Nevada caucuses’ importance, and potential chaos, explained
Why America doesn’t win wars anymore
Amy Klobuchar on Brett Kavanaugh: “He got a really good job out of the whole thing”
Why I will only date men who go to therapy