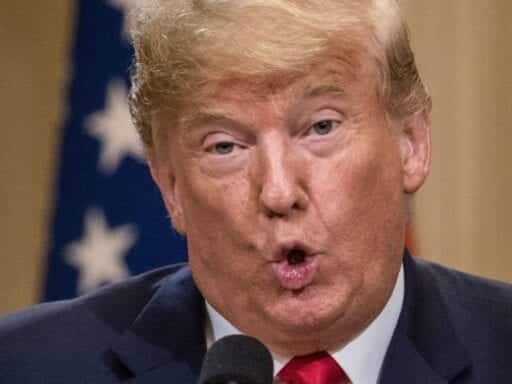 The president claims that the Mueller investigation is driving a “wedge” between US-Russia relations.

Trump tried to change the subject from Russia’s meddling in the 2016 election to the so-called “phony witch hunt” Hannity and Trump’s preferred term for special counsel Robert Mueller’s investigation. There was also a bizarre comparison of Paul Manafort to Al Capone.

Hannity, for his part, began his segment criticizing the “unhinged” media for lambasting Trump over his performance in Helsinki, and for failing to give him credit for his strategy of “strength, not appeasement” — even though Trump has inspired rare bipartisan condemnation, including from some of his most loyal supporters, for capitulating to Putin on the international stage.

Overall, the interview was likely a preview of the spin that Fox News and the Trump administration will be pushing out in the days and weeks to come — and as the special counsel’s investigation continues to intensify.

Hannity kicked off the interview with the issues that matter: Hillary Clinton’s 33,000 “missing” emails, and Trump’s attack on the special counsel’s investigation in front of Putin.

Trump denied collusion: “They have no information on Trump,” Trump said, referring to reporter’s question as to whether Putin had any compromising information on Trump, gathered during his 2013 trip to Moscow for the Miss Universe pageant. Putin didn’t exactly deny having blackmail — but Trump seemed to think he did.

“It was an interesting statement,” Trump continued. “Many years ago, when I was there, for a long time… [there] were many, many business people there. In all fairness, I was a very successful businessman. I was one of a lot of people. And one thing you know, if they had it, it would have been out,” Trump said, likely referring to the “pee tape” — the allegation that Trump paid prostitutes to urinate on a bed that the Obamas slept in on a trip to Moscow.

“And he also said there’s absolutely no collision. Because he gets it. He is one of the people who gets it.”

“To me, the most important issue is the nuclear issue.”

President @realDonaldTrump sits down with @seanhannity for his first interview following his meeting with Russian President Putin. Tune in tonight at 9p ET on Fox News Channel. https://t.co/CXfv7TtOdd pic.twitter.com/7Czrk17irb

“The nuclear problem we have to make sure, we have to be very careful,” Trump added. “If you look at Russia and the United States that’s 90 percent of the nuclear weapons.”

It’s not clear what Trump is referring to here — whether nuclear war or nuclear proliferation or something else entirely. Nuclear proliferation is an area where Russia and the United States do need to work together, including a potential extension of the New Start nuclear treaty. But for all Trump’s emphasis on nuclear, the leaders just gave vague promises about promising to work together on the issue rather than reaching any concrete conclusion.

The Russia investigation is a witch hunt, but actually, Republicans warned that the Russians would meddle, but Obama thought that wasn’t true, but that’s because he didn’t believe Trump would win, and because Peter Strzok, or something?

Hannity bopped between topics — NATO, unemployment, the media — before getting back to subject of mutual interest between the president and the host: Robert Mueller’s investigation.

Hannity, rather than asking Trump point-blank why he chose to believe Putin over his intelligence officials, presented Trump with a leading question about how this was all Obama’s fault.

Hannity: In, [20]14, Devin Nunes [R-CA] said… Russia would try to impact the elections. Barack Obama, in the month before the 2016 elections, and I will read and I will quote: ‘There is no serious person out there who would suggest that you can rig our elections … No evidence that it has happened in the past’ — which is not true — ‘or that it could happen in this election, and I invite Mr. Trump to stop whining and it to go out there and try to get votes.’ He [Obama] said that she weeks before the election.

Trump: He thought that Hillary Clinton was going to win, he didn’t want to do anything to disturb it, and frankly, when I won, he said … this is a big deal. He said it, this is nothing, and it can’t happen. It is very dishonest.

You have to find out who did Peter Strzok report, too? Because it was [former FBI director] James Comey and it was [former deputy FBI director Andrew] McCabe, but it was also probably Obama. If you think that Obama didn’t know what was going on, if you watch — and I said it today, with President Putin, when you watch Peter Strzok’s performance, the lover of Lisa Page — when you watch that performance, I tell you, I know so many people in the FBI. These are incredible people. What they are going through, watching this guy, a total phony.

Hannity starts by taking an October 2016 statement from Obama out of context. The former president was actually talking about Trump’s continued assertions that the election was rigged because of voter fraud.

This is a strategy that Trump and his allies have used before, and Trump seized on Hannity’s talking point — and then somehow ended with a conspiracy theory linking Obama to Peter Strzok, the FBI agent removed from the Mueller investigation over biased texts.

But Trump seems pretty into the idea:

“I was fascinated by it, Trump said, adding that Putin said that “Robert Mueller’s people could go with them, but they probably won’t.” Trump suggested this was because of political bias, not because it, as one Republican congressman put it, “would be like bringing ISIS into a joint terrorism task force.”

“The 13 angry Democrats, you think they’ll want to go?” Trump quipped. “I don’t think so.”

Mueller is the man standing between US-Russia having great relations, but also Trump fixed everything in a few hours

The United States’s relations with Russia have been strained for years — Crimea, Ukraine, Syria, just to tick off a few reasons for frosty diplomacy. An cyberattack on American democracy should be a dealbreaker, but to Trump, only one guy is standing in the way: special counsel Robert Mueller.

President @realDonaldTrump on Mueller probe: “It’s very sad what’s happening to our country because of this.” #Hannity https://t.co/yDQGEHb5F2 pic.twitter.com/2VvXPebqGl

Trump, of the investigation, said “it has driven a wedge between us and Russia”:

Maybe we’ve just knocked that down wedge. But it has driven a wedge, and President Putin said that— one of the early things that he said when we started — it’s really a shame because we could do so much good, whether it is humanitarian aid throughout the Middle East, whether it’s not just Syria, so many different things. The safety of nuclear power, which ultimately, there is nothing bigger and more important.

And they drove a phony wedge. It’s a phony witch hunt, rigged deal. With guys like Peter Strzok and Comey and McCabe. The whole group, and you can imagine who else. It’s a real shame.

Trump later told Hannity that he thinks “we’re doing very well with Russia as of today,” but that we were doing “horribly before.”

“It was great today, Trump continued, “but I think it was really bad five hours ago. I think we really had a potential problem.” Trump again suggested that two of the world’s nuclear powers were being driven apart by “the phony witch hunt.”

Hannity asked again if the phony witch hunt was really the biggest wedge between the two countries, and Trump said, well that’s what Putin told him. “He said, ‘what a shame,’” Trump told Hannity. “He felt it was very hard for me to make a deal because you know, all of this nonsense.”

Trump’s interview with Hannity ended with a bizarre and contradictory rant against the Mueller investigation.

Trump defended himself by saying that the Russians indicted in Mueller’s probe had nothing to do with his campaign — a line the White House and Trump’s lawyer have also used.

“You have to understand, you take a look, and you look at all of these people — some were hackers, 14 people, then you have 12 people. These aren’t 12 people involved in the campaign.”

But then, Trump pointed out, people on his campaign did actually get in trouble:

“Then you had many other people — you look at Flynn, it’s a shame but the FBI didn’t think he was lying,” Trump said of his former National Security Advisor, which makes no sense because Flynn was charged (and pleaded guilty to) lying to the FBI.

“With Paul Manafort, who really is a nice man, you look at what’s going on, it’s like Al Capone,” Trump defended his former campaign manager. It was a rather weird analogy, as Capone — a notorious gangster — was finally brought down by tax evasion, so Trump seems to be implying that they “got” Manafort on lesser crimes than he’s guilty of.

On Mueller probe, Putin told Trump: “He said what a shame. He felt it was very hard for me to make a deal because you know, all of this nonsense.” pic.twitter.com/drOOQVWhDN

“It’s just a sad thing, “Trump concluded. “It’s a very sad thing for our country to see this.”

A promising drug to slow the progression of Alzheimer’s was just unveiled
The RNC weaponized exhaustion
Why “the whole environment in Hollywood had to change” for Harriet to get made
The past 48 hours of Justice Department political shenanigans, explained
Are Australia’s koalas going extinct? We asked an ecologist.
The Supreme Court term starts Monday — with or without Brett Kavanaugh