The 6 Senate Republicans to watch on impeachment 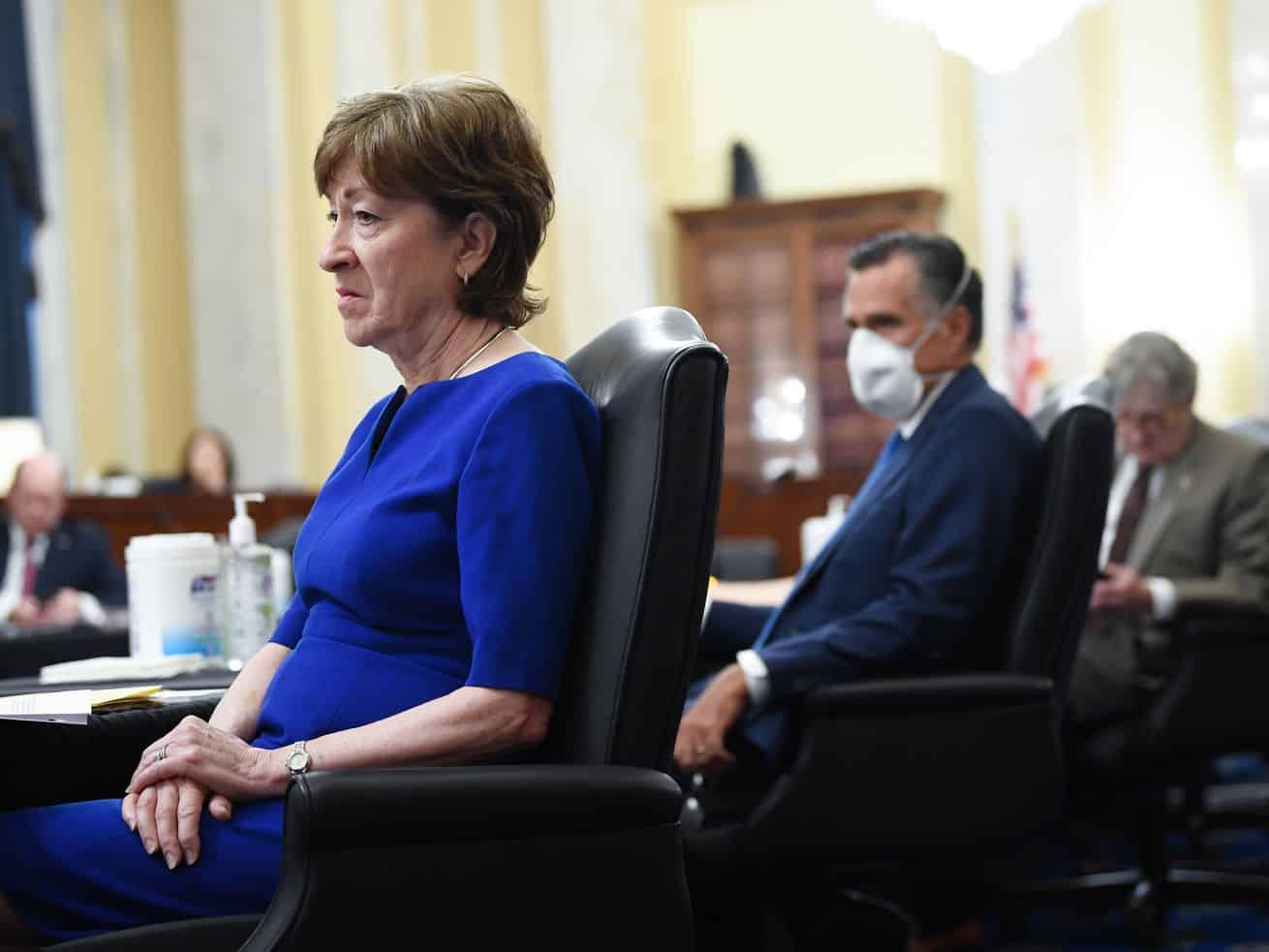 These are the GOP lawmakers seen as most likely to vote for Trump’s conviction.

When it comes to this week’s impeachment trial, the Senate Republican conference is poised to stay pretty united, barring a handful of exceptions. Most Republicans, after all, have signaled that they won’t vote to convict former President Donald Trump, while only a few have indicated an openness to considering it.

During a vote on the constitutionality of the proceedings a few weeks ago, five Republican senators joined Democrats to affirm that they believed the trial should be allowed to move forward. Those lawmakers — Sens. Mitt Romney (R-UT), Susan Collins (R-ME), Lisa Murkowski (R-AK), Pat Toomey (R-PA), and Ben Sasse (R-NE) — are seen as the most likely to potentially support conviction. Sen. Bill Cassidy (R-LA) joined them in another vote on the constitutionality question at the start of the trial Tuesday, saying afterward he was unimpressed by the Trump team’s arguments.

The bulk of the party, however, is either maintaining that the trial itself is unconstitutional (a position most legal scholars disagree with) or arguing that Trump’s actions are not enough to merit impeachment. “I think I’m ready to move on. I’m ready to end the impeachment trial, because I think it’s blatantly unconstitutional,” Sen. Lindsey Graham (R-SC) said during a recent interview on CBS.

Unlike Graham, some of the 44 Senate Republicans who voted to dismiss the trial on constitutional grounds have indicated that they intend to hear out the evidence before making a final decision. Even so, it’s unlikely that 17 Republicans will be convinced to vote with Democrats, the number needed to hit the 67-member threshold required for Trump’s conviction.

“The outcome is really not in doubt,” Graham noted.

Despite this, House impeachment managers hope to sway at least some Republicans, and intend to use a combination of video and social media evidence to demonstrate how Trump incited the insurrection at the Capitol on January 6, an attack during which five people died. The final votes on conviction will reveal not only how much Republicans are convinced by this argument but also how willing they are to publicly distance themselves from Trump.

The Republicans most likely to vote for conviction

The Republicans most likely to support conviction are the six who voted in favor of the trial’s constitutionality, including a few lawmakers who initially called on Trump to resign after January 6. Their willingness to voice criticism of Trump suggests that they may be open to using the trial to publicly confront him, though their final votes on the matter are still up in the air. A few of these senators are also viewed as more moderate members, and Toomey is among the lawmakers who will be retiring after this term.

During Trump’s first impeachment trial, Romney was the only Republican to vote for Trump’s conviction, becoming the first person in history to vote to impeach a president of their own party. This time around, it’s possible he could do the same — and be joined by a few others.

Thus far, all six senators have been careful not to suggest which way they might ultimately vote, arguing that they will need to see what sort of cases the managers — and Trump’s defense team — make. Here’s what these lawmakers have said so far:

Sen. Mitt Romney: “I’ll of course hear what the lawyers have to say for each side. But I think it’s pretty clear that the effort is constitutional,” Romney told CNN.

Sen. Lisa Murkowski: “The House has responded swiftly, and I believe, appropriately, with impeachment,” Murkowski said in a statement. “I will listen carefully and consider the arguments of both sides, and will then announce how I will vote.”

Sen. Susan Collins: “I’ve not made a decision yet, I don’t pre-judge the evidence at the trial,” Collins told NECN.

Sen. Pat Toomey: “I still think the best outcome would have been for the president to resign,” Toomey told CNN. “I’m going to listen to the arguments on both sides and make the decision that I think is right.”

Sen. Ben Sasse: “As a juror, I’m not announcing anything now and I’m going to be limited on what I say in advance, but let’s get one thing absolutely straight: Everything that we’re dealing with here — the riot, the loss of life, the impeachment, and now the fact that the US Capitol has been turned into a barracks for federal troops for the first time since the Civil War — is the result of a particular lie,” Sasse said in a statement.

Sen. Bill Cassidy: “The House managers were focused, they were organized … they made a compelling argument. President Trump’s team, they were disorganized, they did everything they could but to talk about the question at hand,” Cassidy told reporters after the first day of the trial. Notably, he had voted against the trial’s constitutionality before and was the only Senator to change his position on Tuesday.

According to the New York Times, there are about eight other Republicans who have yet to reveal how they’ll vote. All of them have previously supported dismissing the trial. These lawmakers could still be open to conviction, but they’re seen as less likely to vote for it given their backing for ending the trial itself.

These eight lawmakers are Sens. Rob Portman (R-OH), Mitch McConnell (R-KY), Richard Shelby (R-AL), Todd Young (R-IN), Mike Crapo (R-ID), Jim Risch (R-ID), Dan Sullivan (R-AK), and Deb Fischer (R-NE). Several of them have also indicated that they will weigh the evidence before issuing a final position, and some have previously questioned claims of election fraud, though it’s not clear that they’re willing to hold Trump accountable for them.

McConnell, for example, had previously told sources close to him that he believed what Trump had done to incite the insurrection was an impeachable offense, according to the Times. He hasn’t signaled how he’ll vote since, however, and was among the Republicans who voted to say the trial was unconstitutional.

“The trial hasn’t started yet. And I intend to participate in that and listen to the evidence,” McConnell recently told reporters.

McConnell is reportedly not whipping votes — or pressuring his members — to vote against conviction.

The Republicans who are against the trial entirely

The majority of Republicans — roughly 36 — appear to have already decided how they’ll be voting: Many take issue with the trial’s constitutionality, while others say that Trump’s actions are not impeachable.

Because Trump is already out of office, Republicans have raised concerns about the Senate’s ability to convict a former president — and are sticking by this argument to support acquittal. As experts have previously told Vox, many Republican lawmakers are still wary of antagonizing Trump’s supporters and threatening their own electoral prospects as a result.

“The Senate lacks constitutional authority to conduct impeachment proceedings against a former president,” Sen. Tom Cotton (R-AR) previously said in a statement. “The Founders designed the impeachment process as a way to remove officeholders from public office — not an inquest against private citizens.”

As Vox’s Ian Millhiser has explained, most legal scholars believe the trial is constitutional, though the precedent for it is hazy: In 1876, the majority of the Senate opted to move forward with a trial for Secretary of War William Belknap even though he’d already resigned — but he was not convicted, and many who declined to vote against him cited questions about constitutionality.

Beyond this issue of constitutionality, some lawmakers, like Sen. Ron Johnson (R-WI), have also questioned the degree of responsibility Trump should take for the January 6 attack, as Zeeshan Aleem writes for Vox. Others have claimed that Trump’s months of lies about election fraud, and his speech urging supporters to march to the Capitol, do not make him culpable for the storming that took place. (Countering this argument, however, is that several of Trump’s supporters have pointed to his rhetoric as the reason they came to Washington, DC and participated in the insurrection.)

Democrats, meanwhile, have emphasized that the push for impeachment is about making sure the president is held accountable for his role. They’ve noted, too, that they would pursue a vote to bar him from federal office if he was convicted by the necessary 67 members of the Senate.

“Senators will have to look deep into their consciences and determine if Donald Trump is guilty, and if so, ever qualified again to enjoy any office of honor, trust, or profit under the United States,” Senate Majority Leader Chuck Schumer has said.

What we know about the potentially explosive letter Sen. Feinstein sent to the FBI about Brett Kavan...
Democrats need to learn to name villains rather than vaguely decrying “division”
Trump’s nonsense comments about Chicago and stop and frisk
Trump’s about to announce his Supreme Court pick. Here’s when and where to watch.
A White House order to keep masks in the US masks could limit supply, companies warn
What Moderna’s Covid-19 vaccine results mean for ending the pandemic