The ’90s fashion of Netflix’s To All the Boys I’ve Loved Before, explained by its designer 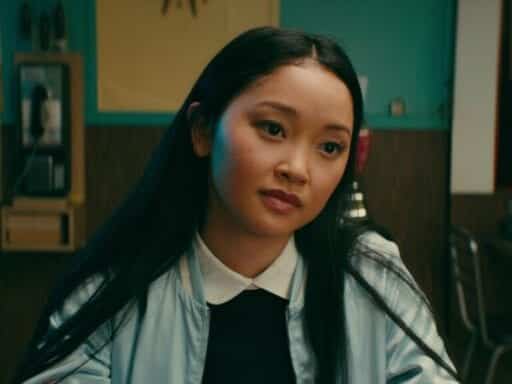 To All the Boys I’ve Loved Before, the deeply sweet Netflix rom-com that has conquered hearts across the internet since its premiere, is a beautiful throwback to the 1990s. It speaks to a time when the characters of teen movies were constantly faking relationships for a bet or a dare or revenge, only to end up falling in love for real, and to a time when the teen movie and the romantic comedy were solid bets at the box office.

And the first way To All the Boys signals what kind of throwback movie you’re about to watch is through its costumes. The film’s wardrobe is pure ’90s revival. Our heroine Lara Jean runs across her high school campus in Clueless-style plaid skirts and platform combat boots; the mean girl slinks into a party in a slip dress and choker like she’s walking right off the set of Jawbreakers. The clothes are nonstop Looks, and they’re also fundamental to the film’s world building and character development.

To understand how To All the Boys I’ve Loved Before achieved its look, I called up costume designer Rafaella Rabinovich. Over the phone, we talked about the dream of the ’90s and why it would have been too easy to dress Peter Kavinsky like a jock, and — service journalism — I found out where Lara Jean’s perfect pink toggle coat came from.

This interview has been lightly edited for length and clarity.

This movie spends so much time paying homage to the teen movies of the ’90s, and one of the things that immediately places you in that world is its ’90s revival costumes, with all the slip dresses and chokers and combat boots. Was that the aesthetic you always had planned, or did it emerge more gradually over the course of development?

If I look at my original mood boards, there definitely was a ’90s inspiration there, because there was also a bit of a vintage touch to it. There was never a question that we were giving homage to the ’60s, and maybe ’70s, and maybe ’90s. I definitely always knew that was going to come up. But it really came to fruition while we were working on it, while we were reading through the script, finger-pointing certain elements and starting to collect the items and seeing how they fall together into this collection that we call a closet.

Where there any looks from the ’90s you specifically wanted to reference? I know Jenny Han [the author of the book that To All the Boys I’ve Loved Before is based on] has said she wanted to get a little bit of a Clueless vibe in there.

Oh, absolutely. Alicia Silverstone in Clueless was a huge inspiration. Not necessarily in the exact colors and cuts, but something about the texture and something about the vibe, and just the different choices that had been made in those combinations were inspiring.

I also looked at Claire Danes in the ’90s, at Winona Ryder in the ’90s. I also looked a little bit, even though it went into the 2000s, at Sex and the City, especially the first season. There’s such beautiful work there of, yes, following fashion, but at the same time following your inner instinct and style and where it is that you come from.

In the books, Lara Jean is someone who thinks a lot about her outfits and the look she’s aiming for. Did you use the aesthetic of the books in putting together her closet, or did you want to develop something more different for the movie?

We did a little bit of both. We definitely tried to stay true to what the book had to offer to give us a base.

One of the things about making something based on a book is that you’re essentially basing it on what imagination has to offer you. There’s moments that are very specific, but you can also take a twist on it because everyone sees it differently when they read it. We wanted to offer something that everybody can connect to. It’s just looking at a bigger picture and at the same time giving it personality.

The interesting thing about dressing high school students in general, when it comes to movies, is trying to find the type without making a joke out of it, so everybody who’s watching it can really find themselves in it. I think that’s one of the things that makes a movie into a popular movie: if you can see yourself in it.

It was too obvious to make Peter into a jock, right? We wanted to give him an essence of being the really cute guy who puts some energy into what he looks like, but being really approachable. It helped having Noah Centineo in that position, because he already had so much presence to him that we really didn’t need to overdo it. And the same goes with Israel Broussard. Just his facial expressions were so accurate that we didn’t need to do much.

To me, costumes are a part of a toolbelt. They’re there to serve the characters, not to take them over.

Josh and Peter are both dreamy in their own way, so we wanted to create two different types. We wanted the dreamy rock ’n’ roll guy for Josh, but without making him into too much of a punk or too much of a bad boy, because that’s not what it’s about. He’s the artist; he’s sensitive. And that’s versus what Lara Jean sees in Peter, who is this dream of a guy who she kissed when she was younger in a game. It’s two dreamy guys who she wrote letters to, and the difference is in how she sees them.

What were your favorite looks in the movie?

I have so many favorite looks. I have a lot of favorite pieces. Certain looks have become more favorites because I can see how they affected people who watched the movie.

I’ve received an overwhelming, humbling amount of love toward the movie about the costuming, on social media or even through my private email and my agent. I’ve received beautiful emails from costume students, from people who have just watched the movie, younger and older. It’s a really amazing amount of love and appreciation, which is so humbling. And it’s made certain moments in the movie — I recognize that the appearance of them was of significance to those people.

The people that we obviously get the most amount of emails about are Lara Jean and Kitty. I say “we” because it obviously takes a village, and I’m very grateful and humble for the people who have worked with me to get to where we did. We get a lot of comments about Chris, about Lucas as well, from a lot of young men who really appreciate the sense of style.

One of my favorite pieces is Chris’s leather jacket, which I have a personal thing with. I made that jacket for another show with [the production company] Awesomeness that hasn’t come out yet, and it ended up going on camera on Chris. It’s a custom-made piece that we modified a little bit for this show. I love this jacket, it was a lot of work to get that one made.

The pink toggle jacket that Lara Jean wears belonged to my sister.

So many people have asked me to ask you where they can get a coat like that. It’s got its own little following.

It’s a very sweet piece. I bought it for my sister a couple of years ago in England. It’s by Gloverall, which is a UK-based company.

Other pieces that are my favorite: Kitty’s gold shoes. She has gold boots, which I love.

I really think the devil is in the details, as they say. There was so much thought behind every piece that was put on camera, in every combination, in order to create a mood and a feeling and to really show the arc of the characters, so to me, the wardrobe is significant for each piece.

The girls’ jewelry shows a really important connection between them. Lara Jean has this heart locket that she wears often throughout the movie, and Margot has a key, and it’s a play on the fact that she’s the key to Lara Jean’s heart. When Margot leaves to go to Scotland, she wears an Aries necklace, which is a bit of a play on the fact that she’s going off and Aries are known to be free-spirited and playful. Then when she comes back, she has a compass necklace on for coming home.

One of my favorites, actually, I have to say, is Lara Jean’s homecoming look, for both her and Lucas. It’s a pretty small scene, but it’s significant. There was a lot of altering of her costume. It was originally a longer skirt that we cut short, and we added sequins to it to just make it more va-va-voom, in a sense. It was just a second that we were going to see it, so we wanted to make it specific. And there’s this really cute striped shirt that we cut short that was originally a tunic. She ended up wearing a vest that we took from Kitty’s closet, because we wanted bare hands because she was dancing. We put a gold choker on her, which was very much a reference to the ’90s.

And Lucas was in this really cool bright patterned button-up, and he wore this great pair of suspenders and cravat. I love that. I think it speaks to their friendship in a sense, to see how they look at the world in a very romantic, dreamy way, but at the same time they’re each to their own way, and they’re different.

How the radical British suffragettes influenced America’s campaign for the women’s vote
The raging controversy over “Bernie Bros” and the so-called dirtbag left, explained
Skincare brand Sunday Riley got in trouble for writing fake reviews. It just settled with the FTC.
Biden says he’ll contest the Democratic nomination if no one gets a majority of delegates
Where the Game of Thrones series finale left every major character
Rick Perry, a key figure in Trump’s dealings with Ukraine, will resign as energy secretary