The acting Pentagon chief was exposed to the coronavirus. He’s not quarantining. 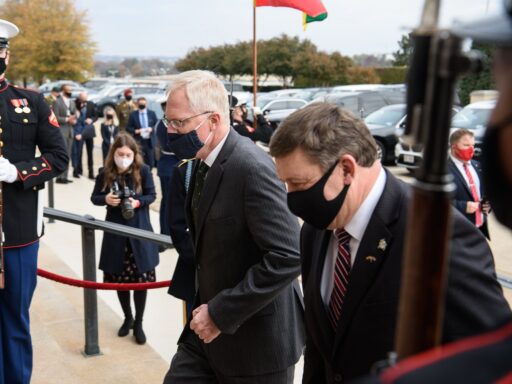 In addition, the Pentagon’s top policy chief tested positive for the coronavirus.

Senior Pentagon leaders were potentially exposed to Covid-19 last week during a meeting with a foreign defense minister, and now one top official — recently placed in his position after an abrupt shakeup at the Defense Department — has tested positive for the novel coronavirus.

In other words, the Lithuanian leader met with many of the people who help the Pentagon — and, by default, the US military — function every day.

For the moment, most of the American officials seem fine. But, per the statement, Tata tested positive for Covid-19 after the visit, though it’s unclear if he contracted the virus from the meeting with Karoblis. As a result, Tata will remain at home for the next 14 days, the recommended quarantine time by the Centers for Disease Control and Prevention.

Photos of Karoblis, the Lithuanian defense minister who later tested positive, meeting with the acting defense secretary, secretaries of the Army and Air Force, and members of the Pennsylvania National Guard during his visit to the U.S. pic.twitter.com/Wej2W2VYft

A US defense official told me that everything continues apace at the Defense Department despite the development. “No change to Pentagon posture,” the official said, speaking on the condition of anonymity because they aren’t authorized to speak openly, “though individual services are increasing telework.”

Hoffman said the Pentagon is still contract tracing people who engaged with Karoblis and Tata and testing anyone who may have been exposed.

So the Defense Department and its leadership suffered a setback, but it’s clearly taking appropriate precautions, right? Not exactly.

In October, top military leaders — including Army Gen. Mark Milley, the chair of the Joint Chiefs of Staff, along with the military heads of the Army, Navy, Air Force, Coast Guard, Space Force, and Cyber Command — went into quarantine after a top Coast Guard official tested positive for the coronavirus.

One would assume, then, that Miller and the service secretaries would follow a similar protocol after meeting with Karoblis. But that’s not the case.

“As CDC COVID mitigation guidelines were followed during the Acting Secretary’s bilateral meeting with the minister, as well as meetings with Mr. Tata, Acting Secretary of Defense Miller is not quarantining,” Hoffman said in the Thursday statement. “Similarly, each of the Service Secretaries are not quarantining based on testing and mitigation measures that were in place during the Lithuanian delegation’s visit and CDC guidelines.”

Acting Defense Secretary Miller not so much. pic.twitter.com/3PVAyKMyHk

Frankly, that’s irresponsible, but it’s part for the course for Miller. When he traveled to Fort Bragg and USS Gerald Ford this week, he encouraged people to take off their masks, according to Wall Street Journal reporter Nancy Youssef. What’s more, he hugged people at both sites.

Miller didn’t know about his exposure to Covid-19 at the time, to be fair. Still, he’s shown no willingness to abide by social distancing or encourage personal protective measures since he assumed the role last week.

It’d be one thing if he were just some midlevel official. But he’s not: He’s the secretary of defense. It’s his duty to set the right example for the people under his care. At the moment, he’s grossly failing.