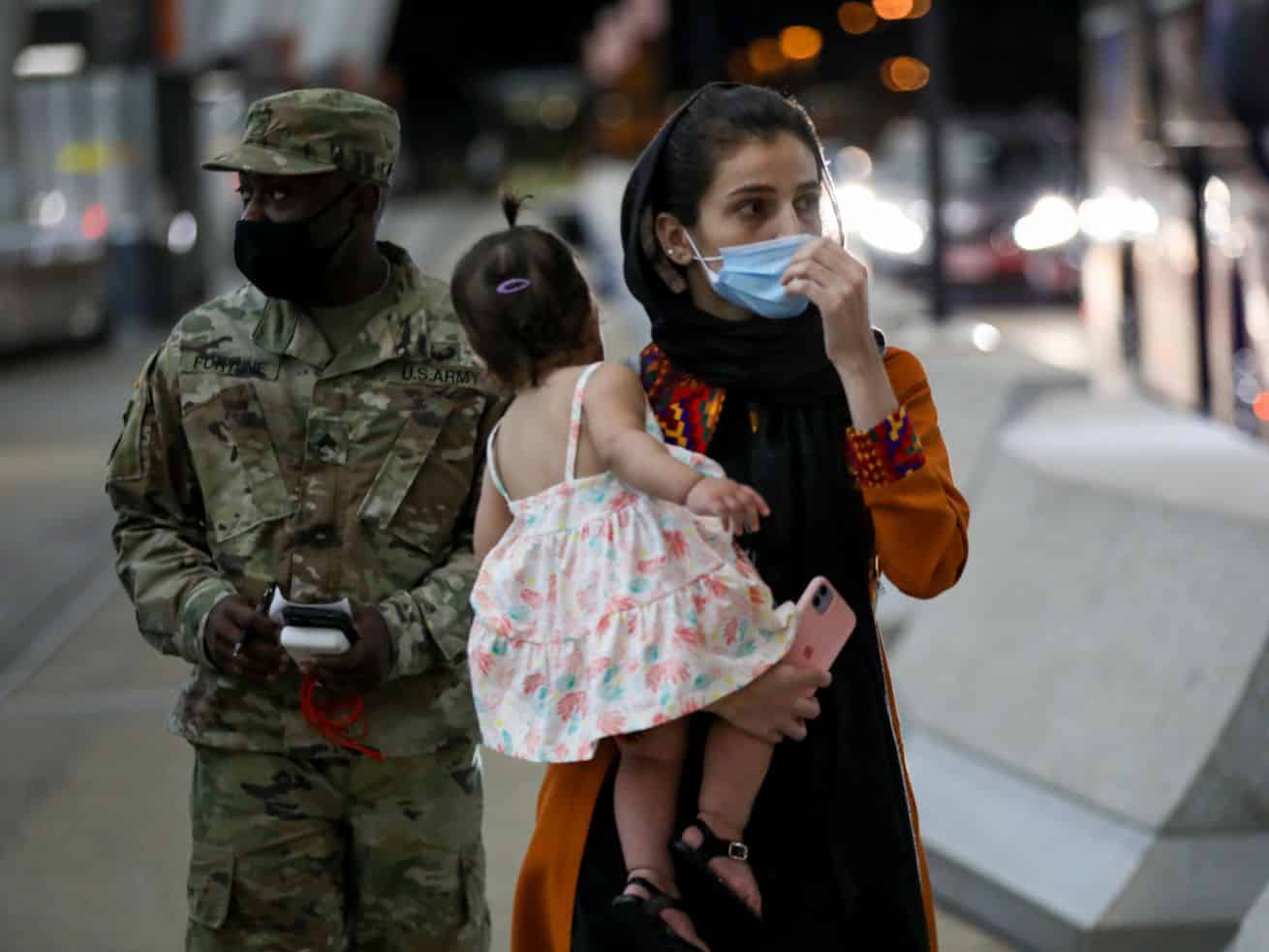 Finding housing is the most difficult part of the resettlement process.

Roughly a quarter of the more than 100,000 Afghans evacuated from Kabul in August have already arrived at American military bases for further processing, awaiting their opportunity to start a new life in the US. But amid a nationwide affordable housing crisis, finding them a place to call home is proving a major obstacle.

There has been a dearth of available and affordable homes for low-income renters for years, but the pandemic has exacerbated the trend, increasing the shortage to 6.8 million units nationwide as of March 2021. The problem is particularly acute in states that have historically taken in large numbers of refugees — such as California, Texas, and New York — as well as in major metro areas across the US.

In New York, there are 37 affordable homes for every 100 low-income renters. In Texas and California, there are fewer than 30. This limited supply has created massive demand for rental units, driving up rents as a result.

The White House is attempting to address the shortage. In the next three years, it plans to build and sell 100,000 affordable homes, prioritizing both individual buyers and nonprofit organizations.

President Joe Biden has also proposed a $300 billion plan to either build or preserve 2 million affordable homes as part of a broader infrastructure package that has already passed the Senate and is currently being considered in the House. Finally, the Biden administration has made a $6.4 billion emergency funding request to Congress to support Afghan resettlement.

But those measures might not come to fruition soon enough for refugee resettlement agencies charged with helping Afghans find their footing during their first three months in the US. They are under immediate pressure to locate housing for the up to 65,000 Afghans expected to arrive by the end of September — and the additional 30,000 projected to come over the next 12 months, a number that could ultimately be a low estimate.

Essentially, the housing crunch is about to get even worse as Afghan refugees continue to arrive in the US.

“Housing is the hardest piece to manage for resettlement,” said Alicia Wrenn, senior director for resettlement and integration at the refugee resettlement agency HIAS. “Our clients are coming in with very limited means, and additionally, they don’t have a history here. So you’re scrambling in a housing market that’s tight for all Americans and really tight for low-income people. Depending on the location, it’s more or less acute — but it’s all acute.”

Housing shortages and rising costs limit where refugees can live

Afghan refugees are coming to the US through one of two primary avenues.

Those who worked alongside the US military during the 20-year war effort can apply for a Special Immigrant Visa (SIV) that gives them access to government-funded services, including a stipend of $1,200 that they can use to pay rent once they’re in the US. Others are coming to the US on humanitarian parole, which allows recipients to live and work in the country for up to two years but does not qualify them for the same kind of government assistance. Those on parole are responsible for raising money for expenses like rent on their own, and refugee agencies have stepped up to front the cost of providing them with support.

Regardless of which path they take, Afghans arriving in the US can choose where they ultimately want to settle, whether they opt to be near family members or select from the State Department’s list of 19 “affordable” cities spanning from Phoenix to St. Louis. Notably, New York City, San Francisco, and Washington, DC — once top destinations for refugees — did not make the department’s list.

No matter where they settle or which program brought them to the US, newly arrived Afghans will have to navigate a troubled housing market — one that can make finding shelter difficult even with advanced planning, a luxury refugees hastily fleeing the Taliban’s rapid advance do not have.

Finding affordable housing is a bottleneck in the refugee resettlement process

Under normal circumstances, a resettlement agency would typically get a couple weeks’ notice before a refugee or SIV arrives at their final destination, which is usually enough time to find long-term housing. They work with local landlords and apartment complexes to secure six- to 12-month leases for refugees in safe, sanitary units located near grocery stores and bus routes, and in a community that is likely to welcome them.

Acquiring those leases involves explaining to the landlord that the refugee is authorized to live and work in the US, that they don’t have a credit or renting history because they just arrived, that the agency might cover the first few months of rent, and that the renter will become self-sufficient in a short amount of time. Once landlords understand the kind of financial support refugee resettlement agencies provide, most are eager to partner with them, said Mark Hagar, the Dallas-area director of Refugee Services of Texas.

“It takes some advocacy, but not a lot because it’s a win-win,” he said.

Building those relationships with housing partners can take time, though. Given that many agencies were forced to shutter offices across the country when the Trump administration slashed refugee admissions to a record low and cut their federal funding, many established agencies were forced to let longstanding partnerships lapse. With 100,000 Afghans waiting, they now need to urgently reestablish those relationships or look for new partners.

Complicating matters is recent consolidation in the housing industry: In some parts of the country, refugee agencies are discovering that the small landlords they once worked with no longer exist; instead, in cities like Charlotte, North Carolina, many of the apartment complexes are now owned by corporations based out of state.

“We might have historically had relationships with landlords who knew refugee resettlement, knew the agency, and knew that they were referring people who were set up to pay but didn’t have a traditional record,” Wrenn said. “It’s getting harder and harder to do that because nobody locally has decision-making authority.”

It’s also becoming more difficult to find affordable housing in areas within close proximity of refugees’ family members in the US, existing diaspora communities, and the staff and volunteer base of refugee resettlement agencies.

“Ideally, for long-term stability, we’re hoping to place them in a community that is supportive, that might be from the same country of origin, and it’s becoming more and more difficult to find places that have that capacity to do so in an affordable way,” said Garrett Pearson, director of the refugee resettlement agency World Relief North Texas, which serves the area surrounding Fort Worth.

These issues have been compounded by the changes the pandemic has brought to the housing market.

In Austin, one of the cities listed by the State Department as an affordable destination for refugees, would-be homebuyers priced out of the second-most competitive housing market in the US have resorted to renting, driving up the average monthly rent from $1,311 in July 2019 to $1,516 as of September — an all-time high and roughly double what renters would have expected to pay a decade ago. Notably, it also exceeds what SIV recipients are given in rental stipends by $316 per month.

The pandemic has also slowed down the construction of new rental units and associated permitting processes in Austin, meaning the housing supply has not grown enough to accommodate the demands of new renters, which grew to 16,000 over the last year, compared with the previous annual average of 12,000.

High prices and low supply leave cash-strapped refugee agencies struggling to compete, and could limit how quickly they can resettle families and how many people they can serve.

All these issues are exacerbated by the fact that agencies are working on an abbreviated time frame. The chaotic nature of the evacuation and processing efforts means agencies might only get a couple days’ notice before Afghan “walk-ins” arrive, leaving them scrambling to find housing. As a stopgap measure, they have had to put refugees up for a few days or weeks in temporary accommodations.

Though refugee agencies say they have received many offers from local community members who want to host refugees, it’s not an option they tend to rely on, in part because it puts refugees and host families in a potentially difficult situation. They have mostly placed refugees in hotels and vetted homes on Airbnb, which has pledged to fund temporary housing for 20,000 Afghan refugees worldwide. Those kinds of accommodations have been particularly useful amid the pandemic in case refugees have had to quarantine.

But refugees can’t live in those places forever. And if housing isn’t available, it’s possible that some Afghans may need to stay on military bases for longer than a couple of weeks before being transferred to their final destination.

“Housing is something that is necessary from the beginning,” Pearson said. “It certainly has the potential where we can get easily overwhelmed with a big wave of walk-ins.”

Refugee resettlement agencies receive funding from the federal government to provide services like temporary housing, but during the current crisis, they’re asking for more support — both financial and administrative.

Given that they’re currently fronting the cost of finding housing and providing other services to Afghans coming to the US on humanitarian parole, resettlement agencies have supported legislation recently introduced by Rep. Seth Moulton (D-MA) and Rep. Don Bacon (R-NE), which would make those parolees eligible for the same federal assistance as refugees.

The advantage of parole is that the process lets the US bring vulnerable Afghans to safety on an expedited basis and give them work authorization, rather than waiting months to process their applications for SIVs or refugee status abroad due to significant backlogs. But again, the kind of resources parolees are guaranteed are limited, leaving the cost of providing for them in the hands of agencies. If parolees had access to the same stipend as SIV recipients and refugees, it would stretch those agencies’ resources, allowing them to serve as many people as possible.

“The current ‘parolee’ system, while a necessary stopgap, is … insufficient to address the continuing needs of individuals and families who have been forced to leave everything behind,” Krish O’Mara Vignarajah, president and CEO of the Lutheran Immigration and Refugee Service, said in a statement.

Wrenn said the nine refugee resettlement agencies nationwide that partner with the US government had been pushing federal agencies to help coordinate housing placements for refugees even before the Afghan crisis unfolded, arguing that formalizing the housing placement process at the national level would make it more efficient.

“These are paying people who are ready to start anew and give it their best, so these are not high-risk clients,” Wrenn said. “But you have to make that case every time, and so it’s arduous. It’s too challenging to go at it one by one. There has to be more support applied from a national level.”

Unlike other areas of immigration policy, there has been bipartisan political mobilization around resettling Afghans in the US, so it’s possible some of these proposals for federal action might actually become reality. And Congress is expected to address Biden’s request for more resettlement funding when it returns in late September. But in the meantime, refugee resettlement agencies are on their own.

Are you ready for the return of prep?
Why it matters that Tucker Carlson is broadcasting from Hungary this week
Blair Hickman, Nisha Chittal, and Agnes Mazur Promoted at Vox
Dem candidate criticized for poster of Wonder Woman lassoing cop
Good Boys is a very funny reminder of how great it is to not be a tween anymore
Schumer: DOD asked to house 20,000 immigrant children

Consumer patriotism is the American way

“Neoliberalism has really ruptured”: Adam Tooze on the legacy of 2020