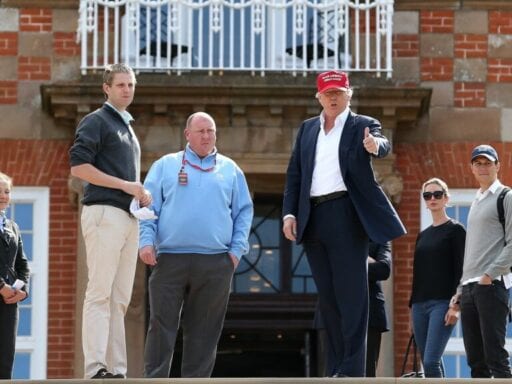 Some stays lasted multiple days and included time on the resort’s golf course.

At a rally in New Mexico on Monday, President Donald Trump defended himself against allegations of corruption following reports that US servicepeople have been staying at a Trump resort in Scotland with increasing frequency.

“And now they have a new one,” Trump said, addressing his critics. “I’m enriching myself. If somebody buys a tank of gas in Scotland from an airport that I don’t own, and they happen to go to a hotel, he is enriching himself.”

The president went on to claim that not only is he not enriching himself, but that he’s losing money: “I’m going to lose billions of dollars and that’s okay.” He has made that claim before, and as Forbes has reported, it is false.

Shortly after that rally, Politico reported that some of the stays may have helped the president more than previously known, given they were longer than once thought, lasting multiple days and including playing time on the resort’s golf course. And although the military has said it does not have a special relationship with the Trump Turnberry, high-ranking servicepeople reportedly are given special treatment at the resort, receiving gifts usually reserved for VIPs.

Trump has faced criticism over the financial rewards he reaps from his hotel and resort holdings for some time, but has been under increased scrutiny of late due to government spending at a remote Trump hotel in Ireland during Vice President Mike Pence’s visit to that country, Attorney General William Barr’s announcement of a $30,000 Christmas party at the president’s hotel in Washington, DC, and concerns his administration has encouraged military spending at his property in Scotland.

It is not clear if President Trump personally had anything to do with this uptick, nor is it clear if any military officials pushed for servicepeople to stay at the Turnberry in order to help the president profit. However, it is clear that at least some found the stays unusual, with at least one military member complaining their per diem was too low to cover food at the resort. And although rooms were offered at a discount — Des Moines Register journalists embedded with the Iowa National Guard said the cost per person was about $150 per night — they were not provided free of charge, meaning they clearly benefited the president.

That fact concerns the president’s critics, who fear that his businesses are — at best — being financially buoyed by his office, and that — at worst — are an avenue through which individuals, corporations, foreign countries, and even the military might curry favor with the country’s chief executive.

The controversy over Air Force spending at the Trump Turnberry, briefly explained

Public questions over the military’s spending at the Scottish resort first arose following a Politico report that found military members traveling to the Middle East stopped at the property while refueling at the nearby Prestwick Airport, a commercial facility, on a number of occasions. And an earlier report by the Guardian found the airport has offered discounted rooms and complimentary rounds of golf at the resort to military members refueling there.

The House Oversight Committee had quietly been investigating both the stays and refueling stops since June, but so far has had little success in learning more about either; the Department of Defense has reportedly refused to cooperate with investigators.

While stops at Prestwick began during Barack Obama’s presidency, they have increased greatly since Trump became president; since 2017, the US military has spent at least $17.2 million at the airport. CNN found there were only 95 stops at the airport in 2015; in 2016, that number rose to 145, and this year, there have already been 259 stops.

At least some of those 40 stays have involved multiple nights, Politico found. A number of those extensions appear to be due to weather conditions making takeoff dangerous or due to aircraft repairs. Obviously, extended stays mean more outlays of taxpayer money at the Turnberry, and servicepeople stuck in the area reportedly used the extra time to take advantage of the resort’s golf course and to shop at its store.

Air Force Brig. Gen. Ed Thomas has said there is nothing out of the ordinary about the stays at the Trump resort, telling CNN that military members who stayed there “made reservations through the Defense Travel System and used the closest available and least expensive accommodations to the airfield within the crews’ allowable hotel rates.”

The Air Force also said its use of the airport was due to logistical concerns, noting Prestwick “has a large parking area, is open 24/7/365,” and that it has “less aircraft parking congestion than locations on the European continent.”

However, as Scottish journalist Martyn McLaughlin has reported, the Turnberry and Prestwick have been intertwined for as long as the president has owned the resort, with the Trump Organization formally partnering with Prestwick to “win” business for both operations in 2014. As part of that partnership, aircrews using Prestwick were given access to food and lodging at Turnberry at reduced rates, and the Trump Organization — and sometimes Trump himself — worked to steer business Prestwick’s way. Trump also made the airport his hub for European travel and stored a helicopter there.

Trump, however, was not extraordinarily successful in steering new business toward Prestwick. In fact, McLaughlin found the airport’s contract with the US military — negotiated in 2015 — was the source of most of its revenue, although even with that (recently growing) influx of cash, it was still operating at a loss. Its current contract with the military is set to expire this month. That agreement was set to be replaced by a new, more lucrative contract that extends until 2024; however, as Vox’s Anya van Wagtendonk has explained, the Department of Defense has decided to postpone that agreement given current concerns about its use of both the airfield and the resort.

The Department of Defense has said its contract with Prestwick is completely separate from the Trump Organization’s arrangement with the airport, and said it did not benefit from reduced rates at Turnberry through the same mechanism as other aircrews have — military stays at the resort were booked through the Defense Department’s Defense Management System rather than through staff at Prestwick.

The military does, however, enjoy reduced rates similar to those available through Prestwick; servicepeople cannot spend more than $166 per night on lodging, a number well below the $350 to $700 rooms at Turnberry normally cost. Journalists embedded with the Iowa National Guard on a trip to Kosovo said they paid about $150 per person per night for their stay.

However, the military maintains any apparent similarities between the Trump administration’s standing agreement with the airport and its own contracts are simply happenstance.

“While initial reviews indicate that aircrew transiting through Scotland adhered to all guidance and procedures, we understand that US service members lodging at higher-end accommodations, even if within government rates, might be allowable but not advisable,” chief Air Force spokesperson Brig. Gen. Edward W. Thomas Jr. said late Sunday. “Therefore, we are reviewing all associated guidance.”

Despite increasing concerns, Trump denies any and all corruption

While some of his properties have seen a decline in attendance since his inauguration, others have seen a boom in visits by his administration officials, and even foreign actors, as Vox’s Riley Beggin has explained:

Corporations and foreign governments have jumped on the Trump spending train: T-Mobile spent $195,000 at the DC hotel while its merger was pending government approval, lobbyists for the Saudi government spent $270,000 on rooms at the hotel in 2016 and later paid for hotel rooms for five days in Trump’s New York hotel that were expensive enough to boost its revenue 13 percent for the quarter.

This concerns ethics officials and members of the House Oversight Committee, who fear that by refusing to divest himself of his business interests Trump has not just opened the door to corruption — such as businesses looking to crest regulatory hurdles buying up extended stays at his hotels — but that he has also placed himself in danger of violating the Constitution’s emoluments clause, which prohibits presidents from receiving payments and gifts from foreign governments as well as payments from the federal and local government above their salary.

Trump’s response to those concerns has been that he’s done nothing wrong, pointing to the fact that he’s ceded day-to-day management of his empire to his children. And shortly after reports of the Turnberry stays were published, Trump tweeted that they have “NOTHING TO DO WITH ME.” Given the president still owns and benefits from all of his businesses, however, the stays have everything to do with him.

Trump continued issuing denials at a rally in New Mexico Monday, repeating a false claim that “by doing this and taking this particular job, which I love, it will cost me billions and billions of dollars.”

Politico’s reporting found Turnberry has also played host to a group of Saudi royals and their entourage for about a week; the Saudi government has also spent heavily at Trump’s Washington, DC, hotel. This too, Trump told rallygoers, is no cause for concern: “If someone from the Middle East that I never saw before comes in and stays at one of my hotels for the evening and pays emoluments. $439, nobody ever heard the word before. And emoluments. Nobody ever heard that word.”

The Department of Justice has heard that word, however. It is defending the Trump administration in two lawsuits that allege the president has indeed violated the emoluments clause. And the reports of Saudi stays come as many — including some Republicans — criticize Trump’s support of that nation. Just this week he seemed to offer the services of the US military to Saudi leaders following an attack on the kingdom’s oil facilities. It is actions like these that spawn allegations of corruption.

And it is into this environment that the military has waded, tarnishing its reputation as a part of the government above politics.

The latest poll from Trump’s favorite pollster is very bad news for him
A generation of economists helped get us into this mess. A new generation can get us out.
A Scandinavian local explains how to make it through winter
A conservative activist is under fire for calling out Republicans on coronavirus spread
Congress keeps procrastinating on funding the government — because of Trump’s border wall
Immunocompromised people are anxious about being left behind in the coronavirus pandemic