The alarming trend of beached whales filled with plastic, explained 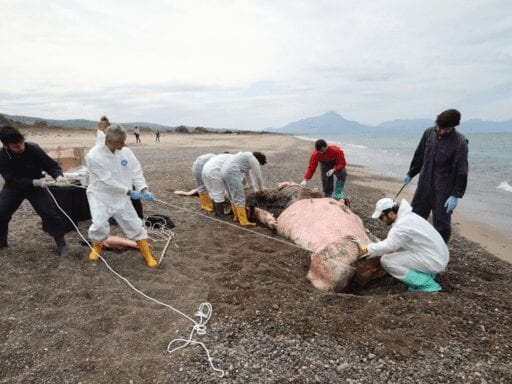 The whales that we’ve found washed ashore are just the tip of the iceberg.

Our oceans are filling with plastic, which in turn is filling up the bellies of the creatures in the sea.

Recently, researchers examined seven beluga whales harvested by Inuvialuit hunters in Canada. This month they reported that they’d found microplastics in the digestive systems of every whale.

“Our observation that that microplastics were present in every individual beluga we sampled underscores the global nature of this emerging pollutant, and the vulnerability of remote regions to contamination,” researchers wrote in a paper published in the Marine Pollution Bulletin.

Microplastics aren’t the only concern; this year we’ve seen several whales wash ashore with huge chunks of plastic inside them.

In May, the carcass of the young sperm whale, estimated to have been 7 years old, was found on a beach in Cefalù, Italy with a stomach full of plastic. Investigators aren’t certain whether the plastic killed the whale. But it’s part of a gruesome pattern that’s become impossible to ignore.

In April, a pregnant sperm whale washed up on a beach in Sardinia with nearly 50 pounds’ worth of plastic bags, containers, and tubing in her stomach. Biologists in Florida euthanized a baby rough-toothed dolphin with two plastic bags and a shredded balloon in its stomach.

“The dolphin was very young and emaciated,” said Michelle Kerr, a spokesperson for the Florida Fish and Wildlife Conservation Commission, in an email. “Due to a poor prognosis, the decision was made to humanely euthanize the animal on scene.”

In March, a 1,100-pound Cuvier’s beaked whale was recovered in the Philippines filled with 88 pounds of plastic bags, fishing line, and rice sacks. A beached sperm whale was found in Indonesia last year with more than 1,000 pieces of plastic inside.

As the quantity of plastic humans dump in the ocean has reached obscene proportions, we’re seeing more and more sea life — including birds, otters, sea turtles, and fish — choking on it.

But the impact on whales is particularly alarming. After centuries of whaling and overfishing, the survival of many whale species is already precarious. Now, just as their numbers are starting to recover, whales are consuming our toxic waste. And their deaths aren’t just about biodiversity loss: Whales play a critical role in marine ecosystems, which provide 3 billion people with their primary sources of protein.

To find out more about why whales are so vulnerable to plastic waste, I talked to Lars Bejder, director of the Marine Mammal Research Program at the University of Hawaii Manoa. He said there are multiple mechanisms at work here and that dying isn’t the only plastic hazard for whales, and explained why the problem will only get worse.

There’s a gargantuan amount of plastic in the ocean

The root cause of these stranded, plastic-filled whales is that plastic is cheap and easy to produce but almost impossible for nature to destroy. Chunks of plastic linger for decades, breaking down into smaller and smaller pieces. This waste then churns in the ocean in massive gyres.

Roughly 8 million metric tons of plastic — a mass greater than that of the Great Pyramid of Giza — enters the ocean each year.

Meanwhile, we’re still trying to figure out how much plastic waste has already accumulated in the ocean. A study published in July in the journal Scientific Reports estimated that 414 million bits of garbage weighing 238 tons have been deposited on the Cocos (Keeling) Islands 1,300 miles off the coast of Australia. It’s a sign that even the most remote regions of the world are now contaminated with the detritus of civilization.

“Sadly, the situation on the Cocos (Keeling) Islands is not unique, with significant quantities of debris documented on islands and coastal areas from the Arctic to the Antarctic,” researchers wrote. “[G]lobal debris surveys, the majority of which are focused solely on surface debris, have drastically underestimated the scale of debris accumulation.”

And the amount of plastic waste in the ocean is surging. Our current trajectory puts us on track to have more plastic in the ocean than fish by weight by 2050, according to the World Economic Forum.

So for the largest, hungriest animals in the ocean, plastic is becoming an unwelcome part of their diets.

Whales are among the more intelligent creatures in the ocean, so why aren’t they smart enough to avoid eating plastic?

Well, one reason is that often plastic is in their food.

Small crustaceans like krill and tiny fish like anchovies often end up inadvertently consuming microplastics. Whales, the largest animals ever known to have existed, have a voracious appetite for these critters. A blue whale eats between 2 and 4 tons of krill per day.

Whales like the blue whale have baleen plates in their mouths that act as filters, trapping their small prey as well as small bits of plastic. This means they are less likely to ingest larger plastic waste items like bottles and containers, but the small plastic bits they consume quickly pile up.

“These baleen whales filter hundreds of thousands of cubic meters of water per day,” Bejder said. “You can imagine all these microplastics they encounter through this filtration process that then become bioaccumulated.”

Microplastics are unlikely to obstruct the digestive tract of a baleen whale, but as they build up inside an animal’s tissues, they can leach toxic chemicals like endocrine disruptors that make the creature sick. This problem can affect all ocean filter feeders, including manta rays and whale sharks.

That means there could be large whales dying of plastic poisoning without obvious culprits like flip-flops and food containers in their stomachs, according to Bejder.

Toothed whales like sperm whales and dolphins normally catch bigger prey, like squid. But since they can swallow larger animals, they are vulnerable to larger chunks of plastic, like bags and nets.

“They might be seeking those out because they’re thinking they might be prey,” Bejder said. A plastic container in murky waters could resemble a fish to a toothed whale, or a sperm whale may inadvertently swallow plastic garbage as it hunts for a meal.

Once ingested, the plastic piles up in the whale’s stomach. It can then obstruct bowels, preventing whales from digesting food and leading them to starve to death. It can also give a whale a false sense of being full, leading the whale to eat less and get weaker. That leaves it vulnerable to predators and disease.

Part of the reason we pay so much attention to whales killed by plastic is because the whales themselves are very big and the plastic culprits are startlingly obvious. Large animals decay slowly, giving people plenty of time to figure out the cause of death, whereas smaller fish and crustaceans dying from plastic decompose quickly and are rarely investigated. Even for casual observers, a dead whale blocking a beach vacation photo is pretty hard to ignore.

Still, we’re missing a big part of the picture.

“The ones that land on the beach that are killed through ingestion, they’re just the tip of the iceberg. They’re just the ones that we see,” Bejder said. “I’m sure that many, many marine mammals have some levels of plastic bags and plastic items in their stomachs.”

Many more whales could be dying from plastic poisoning without our knowledge. Around the Gulf of Mexico for example, 2 to 6 percent of whale carcasses end up on a shoreline. That means the vast majority sink to the ocean floor. This is likely the case for most of the world’s waters.

And the fact that whales are suffering shows that our marine ecosystems in general are in peril. “Whales, baleen whales, these larger dolphins species are pretty much at the top of the food chain,” Bejder said. “They are sentinels of ocean health for sure.”

But with more plastic waste pouring into the ocean, the prognosis for the most mega of megafauna is grim.

The biggest lie we still teach in American history classes
Live results for Puerto Rico’s statehood referendum
The deaths of 2 black men by hanging, and calls for investigation, explained
What does Michael Avenatti have on Brett Kavanaugh? What we know so far.
House Democrats’ new plan for a $15 minimum wage, explained
A second Covid-19 vaccine has received FDA emergency use authorization