The allegations against Brett Kavanaugh are about the present, not just the past 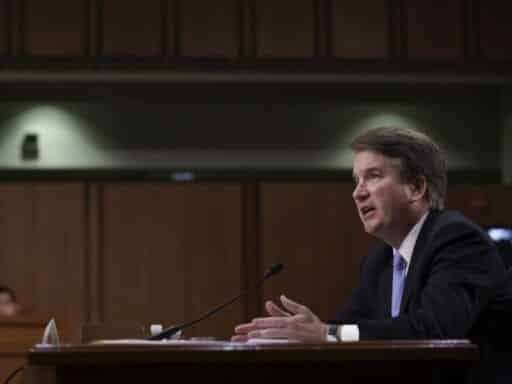 Kavanaugh’s denial raises a question that must be answered.

The story Christine Blasey Ford tells of her assault at the hands of Supreme Court nominee Brett Kavanaugh and his classmate Mark Judge is chilling. They “physically pushed me into a bedroom,” Ford recalls. The boys “locked the door and played loud music” to drown out her cries for help. When that didn’t work, Ford says Kavanaugh clapped his hand over her mouth so tightly “I feared he may inadvertently kill me.”

During all this, she says, Kavanaugh was groping her, trying to rip her clothes off. Ford escaped, but she says the trauma of that incident has reverberated throughout her life, undermining her relationships, her sense of safety, her sense of justice.

There are two defenses I’ve heard mustered on Kavanaugh’s behalf. One is that whatever happened on that summer day in Montgomery County, Maryland, it was 35 years ago, and none of us should be judged for our whole lives by the worst thing we did as teenagers. I’m sympathetic to this defense, though plenty of young men and women find acts they committed in their youths shaping the rest of their lives. The criminal justice system seals the records of minors, except, that is, when we choose to try them as adults.

But this is not the defense Kavanaugh is making of himself. His defense is that Ford is lying. “I categorically and unequivocally deny this allegation,” the Supreme Court nominee said in a statement to the Washington Post. “I did not do this back in high school or at any time.”

There are a few possibilities here. One is that Ford, a professor who teaches clinical psychology at Palo Alto University, is a fabulist. But given that her therapist’s notes show she was talking privately about the alleged assault in 2012, and that she decided not to come forward in Kavanaugh’s hearings until her identity leaked to reporters and she had no choice, it seems unlikely.

Another is that one or all of the participants in this story have misremembered what happened. “Our memory is not like a videotape,” wrote Vox’s Brian Resnick in a superb piece on the ubiquity of false memories. “A more helpful metaphor is that it’s like a video editor working on a millisecond deadline. In its mad rush, the editor splices in bits of truth with whatever filler is handy. And what’s handy is often our biases, or new information altogether.”

A third possibility is that Kavanaugh and Judge are lying. It’s their word against hers. They may know that everything Ford is saying is true but that she has no way to prove it.

If Ford’s allegations are true, though, then the question isn’t just about what Kavanaugh did 35 years ago; it’s about what he’s done since, and is doing now. Kavanaugh is alleged to have committed an awful act as a young man, to have never taken responsibility for that act or its consequences, and to be lying about what happened now. And if that is the case — if he’s lying about it now, or even if his memory is fuzzy but rather than find the truth, he’s tried to publicly discredit a woman he may have assaulted and traumatized — then that bears on his honesty, decency, and fitness today.

I agree with Kavanaugh’s defenders who say that none of us deserve to be defined by the worst thing we did as teenagers. But none of us are entitled to a Supreme Court seat, either. Deciding whether Kavanaugh deserves the highest position in American law requires investigating Ford’s claims, knowing whether Kavanaugh did what he is alleged to have done, and, if so, judging whether his subsequent treatment of his victim and the truth proves him worthy of the office he seeks.

Senate Republicans have sought to rush Kavanaugh toward confirmation even as these allegations have emerged. That’s a disgrace. This is the same party that held Antonin Scalia’s Supreme Court seat vacant for more than 400 days on the argument that voters deserved a voice. There’s a midterm election 49 days from now. Shouldn’t voters get as much information as possible about what Kavanaugh did or didn’t do, and a chance to weigh in here too?

The 2020 US House elections
Downtown Cincinnati shooting: what we know
The debate over ending social distancing to save the economy, explained
This viral Angela Merkel clip explains the risks of loosening social distancing too fast
“I’m a bit of an overwriter”: How Carly Rae Jepsen whittled 200 songs down to 12
A new study finds immigrants aren’t drawn to states that offer them health insurance