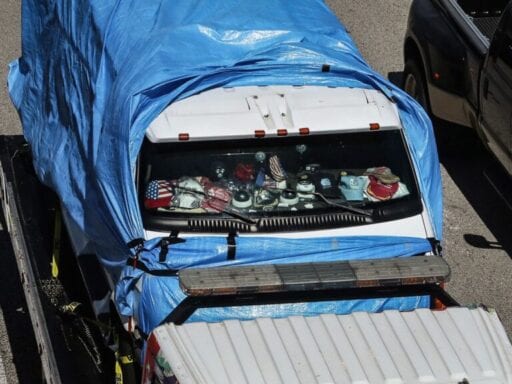 Complete with references to a Native American tribe, soccer — and lots of Trump memes

Soon after officials announced the arrest of Cesar Altieri Sayoc Jr. for sending pipe bombs to prominent Democratic figures, cable news offered the first window into the 56-year-old Florida man’s state of mind when they aired footage of his vehicle — a white van covered in pro-Trump and anti-media and anti-liberal imagery.

And like social media accounts that were allegedly run by Sayoc, his van was a platform to show his support of President Trump verging on the obsessive, and to denigrate Trump’s perceived opposition — some of whom would receive bombs in the mail.

The van was noticeable enough to be recognized by television producer David Cypkin, who had photographed it back in December 2017 and shared the photos with his business partner, Billy Corben, who posted them on Twitter on Friday. The van was also spotted in Ashville, North Carolina, in 2017.

These are not conventional political bumper stickers. Most of them are images rooted in internet memes. Others reference throwback Obama-era scandals like Benghazi and the IRS.

To get a deeper understanding of how Sayoc thinks about politics, it’s worth going through where these images come from.

The focus of Sayoc’s van was railing against Trump’s purportedly enemies in support of the man Sayoc described as “A MAN OF HIS WORD OVER 40 YEARS.”

According to the Washington Post, Sayoc mentioned George Soros 34 times, Barack Obama 29 times and Hillary Clinton 21 times on his Twitter feed, and many of the memes he used on Twitter made their way to his van, with Sayoc calling Soros a “globalist socialist progressive Democrat.”

Sayoc, a registered Republican since March 2016, also put statements praising Florida Republicans Rick Scott and Ron DeSantis — both running for office this year — on his van.

One of the memes Sayoc used on both his social media and his van, “The Swamp to be Drained,” lists alleged scandals of the Obama Administration — like the existence of Black Lives Matter, the Department of Justice’s Fast and Furious debacle and “Obama’s illegal executive orders” — alongside pictures of Democratic figures like President Barack Obama and Michelle Obama, President Bill Clinton and Hillary Clinton, Democratic National Committee Chairman Tom Perez, former attorneys general Eric Holder and Loretta Lynch, and former interim Democratic Party chairperson Donna Brazile.

The “IRS scandal” is also featured, as is an image of Lois Lerner. From 2006 to 2013, Lerner ran the IRS’ Exempt Organizations division (which oversees organizations seeking tax-exempt status.) In 2013, an Inspector Generals report found that Lerner’s division had unfairly targeted conservative and right-leaning groups when they applied for tax exemptions, though Lerner claimed to have done nothing wrong. (The Trump Department of Justice has since declined to charge Lerner based on a lack of evidence.)

The Obamas, the Clintons, Holder, and CNN were among the recipients of the devices Sayoc allegedly mailed, resulting in the evacuation of CNN’s New York headquarters.

However, Trump won 304 electoral college votes, not 306 — the 306 number is a reference to the number of pledged electors the President won, but two of those electors became “faithless electors” and did not vote for the candidate that won their states.

Sayoc also put up some of the Trump Administration’s job creation numbers from 2017 on his van (however, the 28,000 number might more accurately refer to the number of manufacturing jobs added in February 2017, not the number of all new jobs created that month) along with commentary like, “America back.”

And on his front-passenger window, he added another message: “ZERO TOLERANCE KILL YOUR ENEMY AND THOSE WHO ROB YOU THEN TAKE THEM TO EVERGLADE FOR GATORS.”

Earlier this month, Sayoc also used the threat of the Everglades on Twitter against a former Congressional press secretary, telling her, “So you like make threats. We Unconquered Seminole Tribe will answer your threats. We have nice silent Air boat ride for u here on our land Everglades Swamp. We will see you 4 sure. Hug your loved ones real close every time you leave home.’” He then took photos he believed to be of her and shared them — alongside photographs of human body parts being consumed by alligators.

Alongside images of President Trump and Vice-President Pence, Sayoc’s van, like his Twitter feed, features images that reference his alleged Native American heritage.

According to Mark Colone, who was UNCC’s sports information director in 1983 and spoke to the Charlotte Observer on Friday:

“He ran hard all the time and was always gung-ho. He’d go through one of his own players to get the ball. He wore a gold chain when he played and that really irritated a referee, who ripped it off him and slammed it on the scorer’s table and it got caught on the air horn.”

Gordon Sondland, the ambassador at the center of the Trump impeachment inquiry, explained
Joni Ernst walked back her call for Joe Biden to be impeached if elected
The mask barons of Etsy
The Supreme Court’s big decision on the CFPB and the “unitary executive,” explained
Instagram’s co-founders just quit. That could be bad news for Facebook.
House Republican leaders postpone vote on immigration bill in attempt to gain more support