The alt-right is coming to Washington, DC. Here’s how anti-racist groups are preparing. 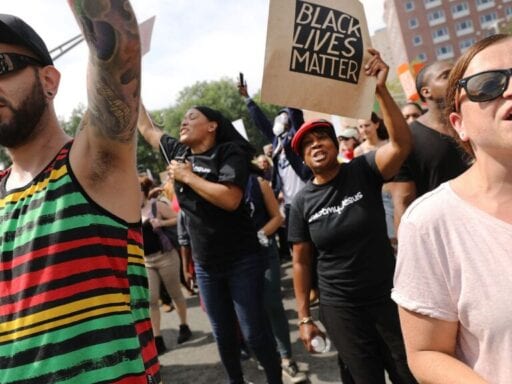 One year after Charlottesville, counterprotesters aim to “stand against hate.”

Last August, hundreds of white supremacists, neo-Nazis, and members of the alt-right descended on Charlottesville, Virginia, for “Unite the Right,” a rally to put the power of white nationalists on full display. A year after that event resulted in chaos and violence, groups plan to hold another “white civil rights rally” in Washington, DC.

But a broad coalition of organizers representing anti-racist, anti-fascist, and socialist groups say that when Unite the Right 2 participants arrive in DC, they will be met with significant resistance throughout the weekend.

At noon on August 12, Shut It Down DC, a coalition of local organizations working to plan counterprotests and other events against Unite the Right, will hold a “Still Here, Still Strong” Rally in DC’s Freedom Plaza. The permitted event will include speeches and music, and organizers have noted that the rally intends to center marginalized groups targeted by the ideology of the alt-right. “We are convening to uplift our long legacies of resistance and the power that we harness from surviving white supremacy in all its forms: overt, covert, institutional and otherwise,” Constance Y, an organizer for the rally, said in a statement.

Some local organizations will also hold separate counterprotests during the Freedom Plaza rally event. Black Lives Matter DC plans to hold a “Rise Up Fight Back” protest near Lafayette Square, while the ANSWER Coalition, a group that focuses on anti-war and anti-racist organizing, also plans to hold a protest in the area. Other counterprotests will take place during the weekend.

Shortly after the main rally on Sunday, counterprotesters plan to march and hold additional protests in Lafayette Square, where the actual Unite the Right event will take place later in the day. The Friday before these events, organizers will hold a six-hour “action camp” to train those planning to directly protest Unite the Right on Sunday.

After the death of Heather Heyer, who was killed as she protested against the first Unite the Right; the brutal assault of DeAndre Harris, who was beaten by white supremacists in Charlottesville and faced criminal charges for defending a counterprotester; and other incidents of violence in the year since, organizers say the impacts of the first Unite the Right rally are still being felt today.

“Last year, our lives were changed,” says Makia Green, an organizer with Black Lives Matter DC, one of the groups in the Shut It Down DC coalition. During the August 12 rally, “we want to make sure that we stand against that hate,” she adds.

As Vox’s Jane Coaston notes, Unite the Right 2 comes after a flurry of setbacks for the alt-right and many of its most prominent members. “The movement has largely been broken — by the law, by widespread disapproval, and mostly by their own actions,” Coaston explains. “Unite the Right 2 could represent its last stand.”

Even if the movement that gathered in Charlottesville for 2017’s Unite the Right has faltered in the past year, it has attracted attention and fueled considerable concern. With hate crimes, presidential politics, and racial profiling incidents fueling increased anxiety in marginalized communities, the second coming of Unite the Right is seen as a very real threat. And while groups involved in the protest argue that standing up to the alt-right on Sunday is necessary, they are still worried about facing violence, a concern that has become more salient after protesters were struck by rubber bullets and projectiles as police officers attempted to keep far-right groups and counterprotesters separated during an August 4 rally in Portland, Oregon.

As counterprotest organizers have prepared for the upcoming events, they’ve been dealt some unexpected setbacks. On July 31, Shut It Down DC’s “No Unite the Right 2 – DC” event page was included in a purge of Facebook accounts thought to be displaying behavior similar to recent Russian misinformation campaigns. A new event page was posted soon after the first one was taken down, but members of the Shut It Down coalition argue that the page removal and initial media reports of the Facebook purge has hurt their cause by suggesting that their work was illegitimate or the result of a Russian influence.

Nonetheless, hundreds of counterprotesters are expected to show up to face down alt-right rallygoers. “White supremacists are still organizing, and they’re coming to DC,” Green says. “We need to stay focused on how that is impacting our communities.”

It looks like Ohio’s primary won’t be happening on Tuesday after all
Can a pair of jeans kill the coronavirus?
America’s top spy downplays “awkward” response to Trump’s Putin invite as Helsinki fallout continues
Former President Jimmy Carter calls for Georgia Secretary of State Brian Kemp to resign
Conservative media is setting the stage for delegitimizing a Biden victory
Coronavirus scammers are flooding social media with fake cures and tests

Is this the end of American optimism?