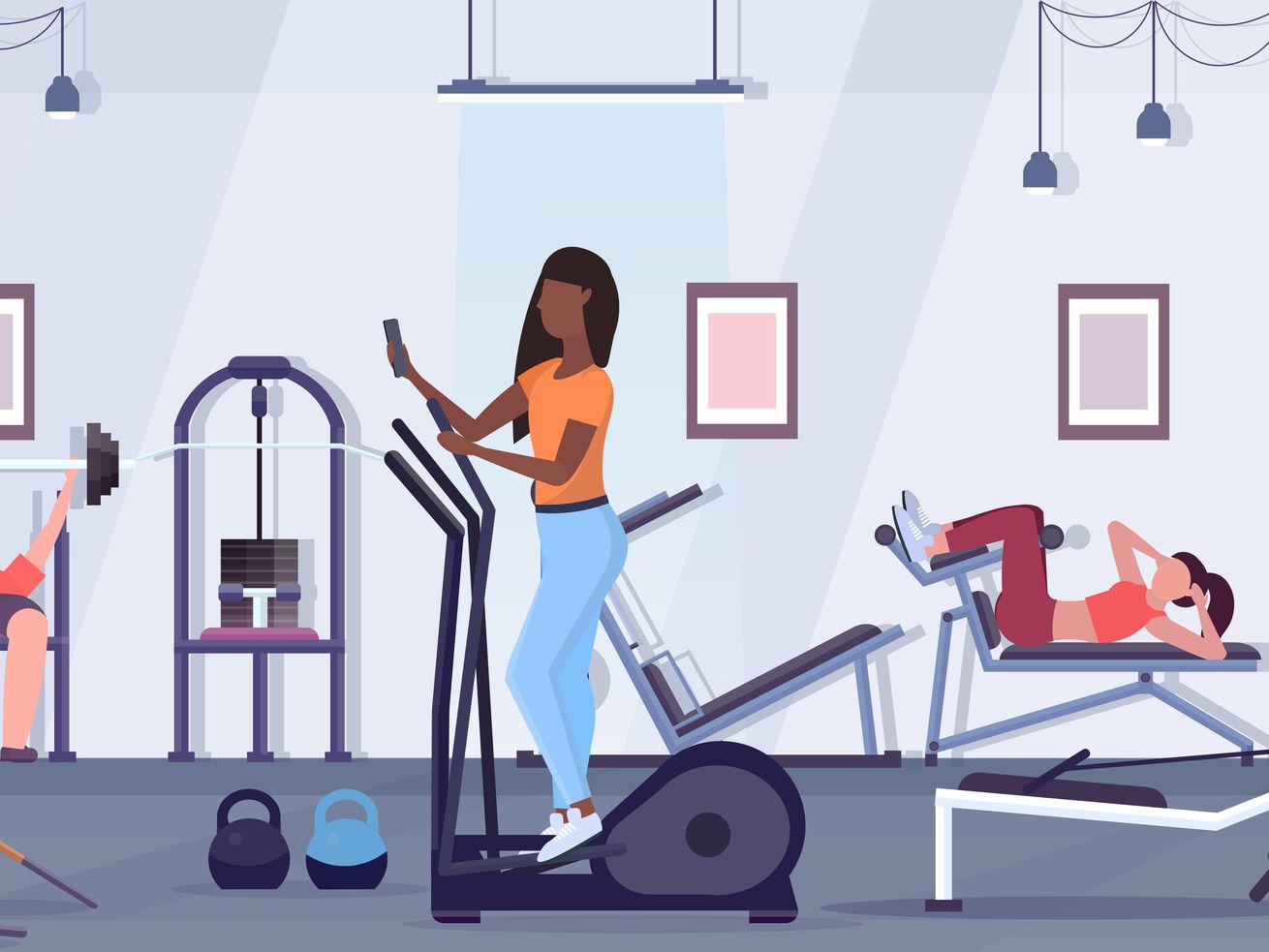 In middle school, I wanted a Curves membership. But I really just wanted to be comfortable working out.

Back in the late aughts, when I was a chubby middle-schooler vowing that “this summer would be the summer that I’d get skinny,” I begged my mother for a Curves membership. Curves — one of the largest women-only gyms in the country — was, to my mind, exactly what I needed to finally be able to fit into the size-zero jeans my peers wore. (That never ended up happening.)

There was no “fit at any size” movement during that time. Instead, there was my yearly physical, with its annual reminder that I was, according to my BMI, obese. Never mind that I was healthy by all other metrics and participated in sports year-round; never mind that I was strong for my age and gender. To the world, I was fat and unfit and had to go to the gym as penance.

And if there was one thing an unconfident 11-year-old couldn’t do, it was work out among dozens of muscular, in-shape men. There was something so intimidating about those male gym regulars. The idea of one taking notice of my existence in their space, their domain? As a preteen with no idea how to even talk to boys her own age, working out with full-grown men was not going to happen.

And if there was one thing an unconfident 11-year-old couldn’t do, it was work out among dozens of muscular, in-shape men

My mom didn’t end up springing for the Curves membership or any other women’s gym — but plenty of other women did. Curves became synonymous with women-only gyms and, at its peak, was one of the fastest-growing franchises not only in the country but also globally. Other national franchises like Lucille Roberts, alongside local women-only gyms around the world, offered the benefits of a single-gender fitness environment that I so desperately looked for as a preteen, and in the early 2000s, their popularity was thriving.

Today, single-sex gyms have fallen out of favor as a fitness trend (quite a few Curves, for instance, have closed). And for many, frankly, they don’t feel very 2021. With the rise of studio exercise classes, which are often de facto single-gender, their necessity is less clear, and their explicit delineation around gender raises questions of inclusivity, particularly when it comes to trans and nonbinary gym-goers.

Curves states on its website, at least, that it does not discriminate by race, gender, or sexual orientation. But some women’s gyms have seriously dropped the ball, asking incredibly invasive questions about trans women’s transitions and implementing discriminatory practices based on their perceptions of womanhood. And for nonbinary people, “women-only” messaging can be exclusionary, which is unfortunate for a space that strives to be a place of comfort.

Still, for many, these gyms represent a way to reach your fitness goals and maintain a healthy lifestyle, free from the intimidation and harassment often present in co-ed gyms. You can’t talk about the benefits of women’s gyms without talking about harassment in co-ed gyms.

A 2018 survey by an exercise product site found that nearly one in five women said they had experienced harassment at the gym, causing the majority of them to change their behavior in some way. From changing what they wore (or their workout program) to considering an all-women gym to refraining from going to the gym at all, it is a common occurrence for women to adjust their lives based on what happens at the gym. In an ideal world, the gym is supposed to be a safe space, but the behavior of other gym-goers can seriously infringe on that.

Courtney Tenz, a German-based copywriter and brand marketing lecturer, says an all-women gym helped her get over her fears of working out in public when she was living in Boston in her early 20s. The gym felt safe and welcoming, and the trainers were incredibly supportive.

“It’s much more than a gym, it’s a community”

Similarly, L’Oreal Thompson Payton, a Chicago-based writer and editor, says she feels at home when she’s working out around only women. Payton, who attended an all-girls Catholic high school, appreciates the feelings of “solidarity and sisterhood” she found at her pole-dancing studio. “It’s much more than a gym, it’s a community,” she says. Unlike Curves or Lucille Roberts, the studio was a de facto women-only space, but Payton found the same solace that women sought in those gyms.

Charisma Lowe, a 26-year-old social media manager based in Atlanta, works out with a female trainer in a co-ed gym and says men constantly come up to her and her trainer to give them tips.

“There’s a lot of micromanaging, and I’m not sure if they mean any harm, but it comes across like she doesn’t know what she’s doing,” Lowe says. “But obviously, I hired her because she knows what she’s doing.” Lowe is also hypersensitive to what she wears while working out, having gotten looks once for donning just a sports bra on a hot day. She sticks to T-shirts no matter the weather, and has even gone so far as to wear sweaters to the gym.

And Sade Adebayo, a 29-year-old powerlifter from Virginia, complained that she faced sexual harassment when working out in a co-ed gym. Men would make comments about her body, telling her not to work out her upper body and to focus on her glutes and legs. Other times, men would strike up inappropriate conversations with her. Some would even go as far as inappropriately spotting her by putting their genitals on her. Adebayo also says men would use their size and stature to intimidate her and make her feel uncomfortable at the gym.

For reasons like these, I once thought working out among other women seemed like the perfect way to mitigate gymtimidation and harassment. And for many, women-only gyms may feel like a godsend. However, I’ve realized as I’ve grown older that it’s not always that simple. Working out among only women definitely offers benefits and a level of comfortability that I yearned for. But when you’re trying to navigate feelings of intimidation, shame, or unwelcomeness in the gym, there are other factors that come into play.

Ashleigh Kast, a fitness coach who specializes in working with women who have metabolic and autoimmune issues, says women’s gyms, such as Curves, that offer a model of “women-specific” fitness perpetuate harmful myths about gender and fitness. “[Places like Curves] thrive on the understanding that men and women should train extremely differently, which is not true or founded in science,” Kast says.

As a result, Kast thinks of gyms like Curves as less intense. While Curves workouts can be pretty effective, Kast says Curves has marketed itself in a way that differentiates it from more challenging programs. It may be the case that in an attempt to seem more feminine, the marketing made Curves workouts seem less difficult.

And even though Tenz, the copywriter, fell in love with her gym in Boston, for her the women-only gyms in Germany left something to be desired. “I tried one for a few months, but it mostly felt like a place where retirees went to socialize, so it didn’t feel as powerful to work out there. It was great for them, though, just not enough for me,” she says.

Sade used to work out at a local Gold’s Gym that offered a section called “Lady Gold’s.” Even though Sade doesn’t have any complaints about the environment there, the lackluster equipment made it impossible to stay in that section. “If I did want to work out exclusively in Lady Gold’s, I would have limited equipment available to me,” she says. To Sade, the variety and quality of the equipment just weren’t comparable to that of the gym’s co-ed area.

Now Sade works out in a specialized powerlifting gym, which she says definitely has its perks: There’s a camaraderie that you get from exercising in a space where people have similar goals, and she’s never experienced sexual harassment at her powerlifting gym.

Much later in life, I had the opportunity and privilege of working out in a gym that was majority women. For a few months, I went to a powerlifting gym that had an all-women competition team. As someone who had perfected her resting bitch face to ward off any comments or looks when I went to a commercial gym, going to a gym filled with women who shared a common goal that wasn’t about aesthetics felt incredibly empowering. And our goals that were aesthetic were as varied and diverse as we were. We were a group of women that were unafraid of looking “bulky.” Instead, we were in awe of the physical representations of our hard work, like our muscular thighs and our calloused hands.

Reflecting now, I realize that Curves may not have been the best place for me. Curves, and other women’s gyms, have a perception of being for a certain type of demographic: older people, but also skinny people. The feelings of self-consciousness wouldn’t subside if my larger, Black body was working out among a gym full of thinner, white ones. It felt like everyone was pursuing the same aesthetic, one I knew I would never achieve.

I’m not 11 years old anymore. I no longer have to ask my mom for permission for anything, let alone a gym membership. But what I consider a safe, inclusive workout space looks a lot different from the Curves commercials I was watching as a preteen. It’s not just about the gender makeup of a gym.

Really, what we’re looking for, and what gyms like Curves were trying to offer, is a space where we can come in, work out, and not think. Not think about other people’s or even our own opinions of our bodies. At the end of the day, we’re just trying to do something that is good for our physical and mental health. If you can find that in a Curves gym, then good. But if you haven’t found it, it’s definitely out there. And you may have the legacy of Curves to thank for it.

Chika Ekemezie is the founder of twenty-something and a Philadelphian who writes about sex, dating, and the politics of daily life. You can find her work in publications like Cosmopolitan, Vice, and Bustle. Follow her on Twitter and Instagram.