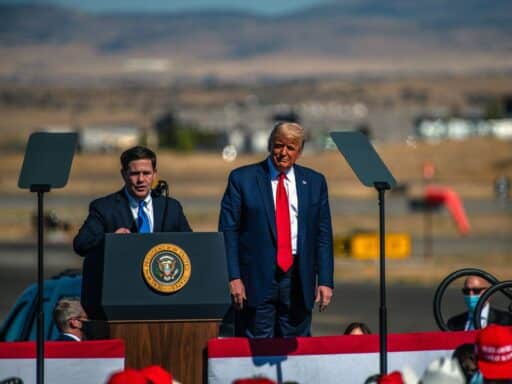 As the state grows increasingly blue, the Arizona Republican Party is tacking to the right.

On Saturday, the Arizona Republican Party decided to censure several of its members. Those members were not the state’s four US House lawmakers who voted to overturn Joe Biden’s victory — a victory a majority of their state voted for.

Flake, McCain and Ducey were subject to individual resolutions condemning their vocal critiques of Trump. Ducey was also condemned for closing businesses in an attempt to stave off the spread of coronavirus in the state, and for not supporting efforts to overthrow the state’s results in the Nov. 3 presidential race.

The measures, taken during a seven hour-long party meeting, are largely symbolic, but demonstrate a rift between the more moderate faction of the state GOP and its members further to the right, with support for Trump serving as the key metric.

Arizona was subject to some of the most contentious of the Trump campaign’s legal challenges to the outcome of the November election. Eight statewide lawsuits challenging now-President Joe Biden’s narrow victory in the state were dropped or dismissed.

And Republican U.S. lawmakers were in the process of contesting Arizona’s electoral college certification on Wednesday, Jan. 6, when a frenzied mob of Trump supporters stormed the U.S. Capitol in an attempt to violently overturn those same results.

Biden was the first Democrat in more than 20 years to carry Arizona. The state’s two Senate seats flipped from Republican to Democrat in the last three years as well.

Arizona Republicans have had a disappointing few years in national elections, and this divide over aligning with Trump indicates a broader divide within the national Republican party. Lawmakers are left with a choice of continuing to support Trump, with hopes of benefiting from his strong base, or trying to purge him and the vestiges of his leadership from their platform.

McCain, Flake, and Ducey represent one wing of the Arizona GOP. Kelli Ward represents another.

McCain and Flake have received criticism in the past from their party fellows for being lukewarm on Trump. While still in office, Flake frequently criticized Trump, even while he continued to support many elements of his agenda. Facing a significant primary challenge as a result of his criticisms, he declined to run for reelection in 2018. That seat was won by Democrat Kyrsten Sinema.

And McCain’s late husband and Trump had clashed in the senator’s later years. Trump famously criticized John McCain’s military service, mocking the time he had spent as a prisoner of war, and the senator cast a decisive vote against Trump’s attempts to repeal Obamacare. Cindy McCain has since thrown her weight behind opponents of Trump, and is a supporter of same-sex marriage.

On Twitter, McCain called her rebuke a “badge of honor.”

It is a high honor to be included in a group of Arizonans who have served our state and our nation so well…and who, like my late husband John, have been censured by the AZGOP. I’ll wear this as a badge of honor.

And Flake posted a photograph of himself, McCain and Ducey at Biden’s inauguration, calling them “good company.”

Meanwhile, Ducey’s censuring stems from his efforts to restrict the spread of the Covid-19 pandemic in his state, as well as his defense of the state’s electoral processes, even as he vocally endorsed Trump.

Alongside the censures, Saturday’s meeting indicates that the Arizona G.O.P. is, as a body, establishing a far-right platform. In addition to censuring three prominent members with more moderate politics, the party also reelected Kelli Ward as state party chair.

Ward is a hardline Trump loyalist who campaigned for Flake’s vacant US Senate position in 2018 alongside Mike Cernovich, a propagator of the Pizzagate conspiracy theory.

Though she didn’t win the party’s nomination for that Senate seat, she won re-election as chair this weekend, the New York Times reported, after playing a “recorded phone call of Mr. Trump enthusiastically endorsing her.”

The party also adopted several stances that situate them at the far reaches of anti-immigration policies, including ending Deferred Action for Childhood Arrivals (DACA) and revoking birthright citizenship. They also adopted a resolution to affirm that there are “only two genders.”

While these moves in the state party do not have the weight of a mandate, they may have resonance elsewhere, as the Republican party contends with Trump’s legacy.

The view from a former McConnell adviser on the strength of the AZ flex > https://t.co/QNZaIzbdCc

By that same token, other party leaders attempting to stake out a more moderate path— and possibly their ground in the 2024 GOP presidential primary — may find alignment with the rebuked Arizona leaders.

That may be the case for Maryland Gov. Larry Hogan, a Republican leading a largely blue state who clashed with Trump throughout 2020 over coronavirus resources. Hogan was one of just a few Republican leaders to call for Trump to concede the November election, and, after the attempted insurrection at the Capitol, Hogan called for Trump’s removal from office.

On Twitter on Saturday, Hogan criticized Arizona’s Republican Party, managing to get in a dig about the state’s blue 2020.

“It’s shameful that a state party would be more focused on condemning Republicans who win elections than actually winning them,” he wrote about the three chastised Arizonans. “We need their voices to rebuild a big tent, principled GOP.”

Trump, meanwhile, is considering making the rift he’s revealed in the party even more deeper — he’s reportedly thinking of creating his own political party.

The real national emergency is Trump’s incompetence
The state of employment in pandemic America, in 6 charts
Top 2020 candidates will be stuck in Washington because of the impeachment trial
Vox Sentences: Suspicious packages
How cauliflower took over your pizza, your kitchen, and the world
Woody Allen’s strange, delayed new movie, explained