The assassination of a top Iranian nuclear scientist, briefly explained 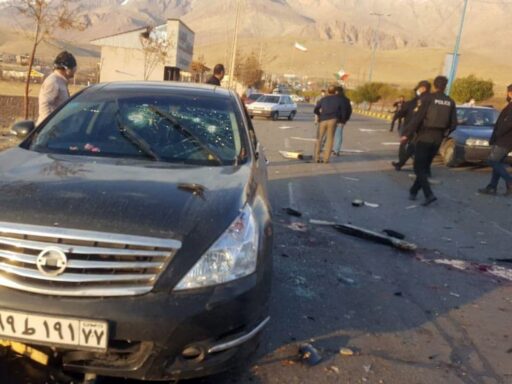 Iran has blamed Israel for the attack, and pledged retaliation.

Iranian President Hassan Rouhani pledged retaliation for the killing of Iran’s top nuclear scientist in remarks Saturday, promising a response “to the martyrdom of our scientist at the proper time.”

The scientist, Mohsen Fakhrizadeh, was killed near Tehran on Friday, authorities said, just weeks after an international monitoring agency confirmed that the country had taken new steps in its nuclear development, moving even further past limits on nuclear research imposed by a now discarded 2015 nuclear deal.

According to Iran’s Defense Ministry, Fakhrizadeh was ambushed by gunmen while traveling to a town about 40 miles away from Tehran, and died after being taken to a hospital.

No country or group has claimed responsibility for Fakhrizadeh’s death, but in a statement on Twitter, Iranian Foreign Minister Javad Zarif described the killing as “an act of state terror.” In his televised address Saturday, Rouhani accused Israel of being behind the attacks.

Experts say Rouhani’s accusation is likely not wrong. According to the New York Times, at least one American official, as well as two other intelligence officials, have indicated that Israel was responsible for Fakhrizadeh’s death.

Such an attack would seem to be within Israel’s abilities. Earlier this month, the New York Times reported that Israeli assassins in the Tehran — Iran’s capital — killed a top Al Qaeda leader living there on behalf of the US. And Israeli Prime Minister Benjamin Netanyahu described Fakhrizadeh as a figure of interest and import in a 2018 speech. Israeli officials, however, have refused to comment on whether the country played any role in the killing.

Whoever is responsible for Fakhrizadeh’s death — the latest loss in a long-running US-led campaign of “maximum pressure” on Iran under President Donald Trump — Iranian military leaders like Iranian Gen. Mohammed Bagheri see his killing as a “huge blow to the Iranian defense establishment,” as Axios reported Friday.

And it’s also just the latest in a series of setbacks for Iran’s nuclear program, including a summer fraught with mysterious explosions at testing and research sites, for which experts believe Israel is likely responsible.

Among other targets, Natanz, Iran’s underground chief nuclear facility, was rocked by an explosion in early July. A missile facility, Khojir, was also the site of a major explosion in June.

New images show the scale of the destruction from the explosion at Iran’s Natanz nuclear facility on July 2. There may be further damage to the facility’s underground elements, which aren’t visible from above.

As Dalia Dassa Kaye, the director of the Center for Middle East Public Policy at the RAND Corporation, told Vox’s Alex Ward in July, “there is a pattern of escalation and a context” to this summer’s explosions “that would suggest a motive on the Israeli side to target the Iranians.”

Israel has long been anxious about the prospect of Iran acquiring nuclear weapons, concern that may have intensified on Wednesday last week, when the International Atomic Energy Agency — a UN agency charged with monitoring Iran’s compliance with the 2015 Joint Comprehensive Plan of Action, better known as the Iran nuclear deal — reported that Iran had taken yet another stride toward potentially producing nuclear weapons.

The report says that Iran is using a type of advanced centrifuge prohibited by the deal to enrich uranium at Natanz, the same facility that suffered an explosion in July this year.

In 2018, Trump moved to tear up the nuclear deal and reimpose US sanctions on Iran. Subsequently, Iran has also abandoned portions of the deal, arguing that because the US exited the agreement that it was no longer valid. In January the country indicated that it was enriching uranium at a higher level than before it entered the deal.

Despite Iran’s promise to retaliate, it’s somewhat unclear what happens next as tensions in the region remain high. While Iran’s Supreme Leader Ayatollah Ali Khamenei promised “definitive punishment of the perpetrators and those who ordered it,” it is not clear what form that might take.

Following the US assassination of Iranian Revolutionary Guard Corps leader Gen. Qassem Soleimani in Baghdad, Iran retaliated with an airstrike on US military bases this past January.

Even before Fakhrizadeh’s death, Iran had indicated as recently as September that it plans to retaliate further for Soleimani’s killing. But that doesn’t mean Iran will choose to act now — particularly as it deals with the Middle East’s worst coronavirus outbreak — which as of last week had caused more than 37,000 officially confirmed deaths.

And while Iran has also laid blame for Fakhrizadeh’s death on the US, according to the Times, there’s also the incoming US presidential administration to consider. President-elect Joe Biden, who was vice president to President Barack Obama when the Iran nuclear deal was negotiated, will take office in January 2021 and has said he hopes to reenter the deal as president.

Iran hasn’t ruled out the possibility. In early November Zarif, the country’s foreign minister, told CBS News that “We can find a way to reengage, obviously. But reengagement does not mean renegotiation. It means the US coming back to the negotiating table.”

Whether that reengagement is still an option is no longer clear, however, and with nearly two months left in office, Trump represents something of a wildcard when it comes to the US-Iran relationship. Earlier this month, he reportedly asked advisers about options for a strike against Iran’s nuclear facilities at Natanz, though officials now believe such an attack is “off the table,” according to the New York Times.

Neighboring Iraq also remains a possible flashpoint. Last week, rockets believed to have been fired by an Iran-linked militia group “landed in the U.S. Embassy complex within Baghdad’s fortified Green Zone,” according to the Washington Post. No embassy personnel were harmed in the attack, and — for now — the US remains on track to further draw down its troop presence in Iraq in coming months.

In a statement reported by Al Jazeera Saturday, a spokesperson for UN Secretary-General António Guterres called for caution.

“We have noted the reports that an Iranian nuclear scientist has been assassinated near Tehran today,” UN spokesman Farhan Haq said. “We urge restraint and the need to avoid any actions that could lead to an escalation of tensions in the region.”