The Atlanta shootings can’t be divorced from racism and misogyny 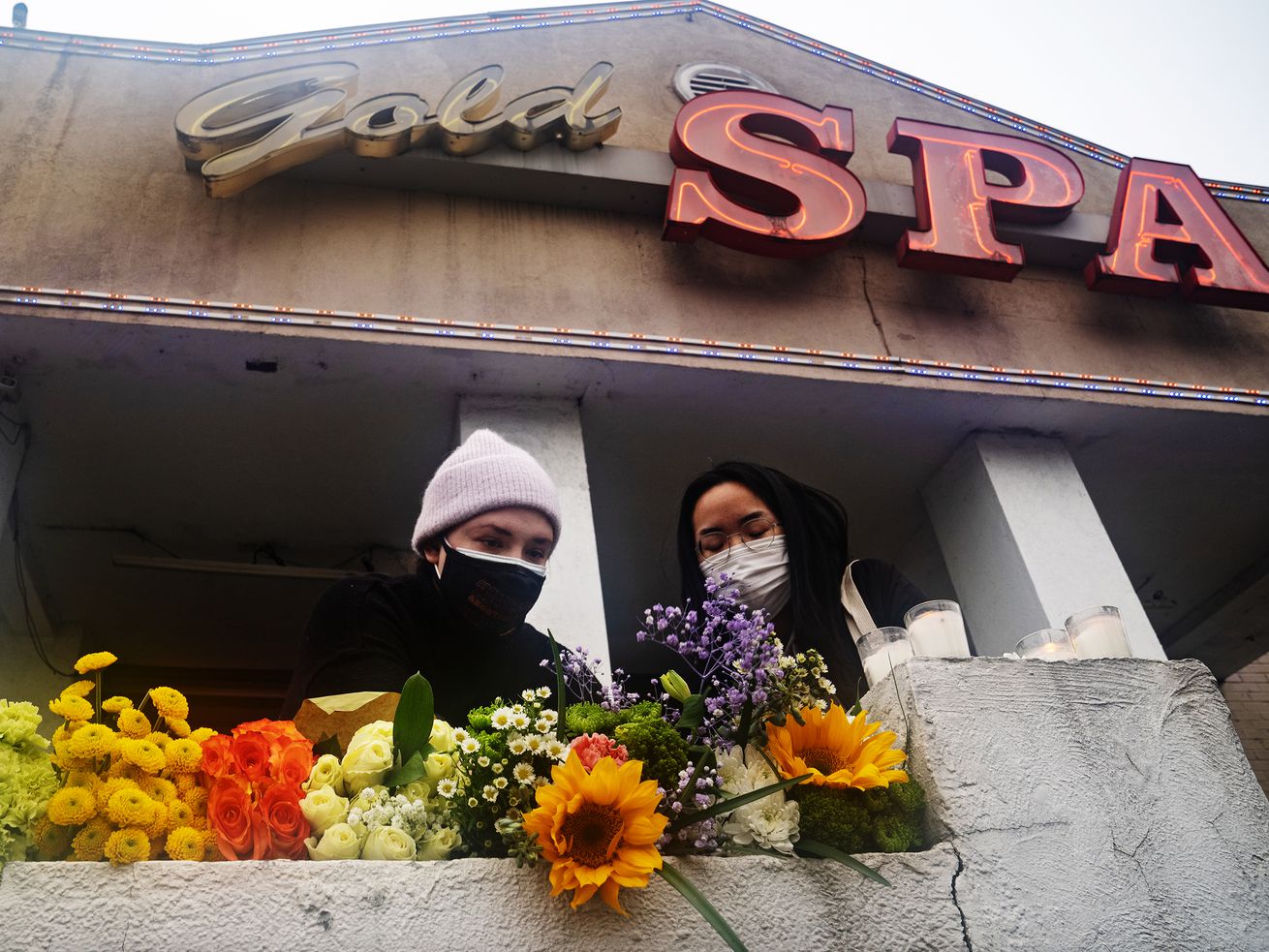 The suspect has claimed that these attacks weren’t racially motivated even though they predominately targeted women of Asian descent.

After eight people — including six women of Asian descent — were killed at three Atlanta spas on Tuesday, police echoed a surprising claim: According to the suspect, the attacks weren’t “racially motivated,” they said.

Instead, they noted that the alleged shooter, 21-year-old Robert Long, had “some issues, potentially sexual addiction,” seemingly writing off the role of race altogether. (Later in the day, it came to light that one of the officers who made these statements, Capt. Jay Baker of the Cherokee County Sheriff’s Office, had posted to Facebook about a T-shirt that espoused a conspiracy theory that the coronavirus had been “imported” from China.)

On the one hand, police seemed as though they were attempting to provide clarity: Since anti-Asian incidents have surged in the last year as people have scapegoated Asian Americans for the coronavirus pandemic, officials likely wanted to make it explicit that this attack was prompted by something different. Their statements, however, wound up obscuring just how much racism and misogyny were obviously tied to the shootings, which Long framed as a way to reduce the “temptation” he faced at these spas.

That perception alone relies on longstanding tropes about these businesses and about Asian American women who have been exoticized and fetishized as sexual partners as far back as the 1800s. In other words, the suspect’s choice of victims and the rationale he gave are telling in themselves: He may explicitly state that race was not a factor, but his actions and his reasoning clearly suggest a very different interpretation.

It *is* about race because he hypersexualized, devalued, dehumanized, and targeted Asian women, not white women. The media makes too many excuses for white supremacy and misogyny. https://t.co/v8Qy5q9LRp

At this time, officials have yet to reveal more information about the victims: As Vox’s Rachel Ramirez has reported, those who have been identified are Delaina Ashley Yaun, Paul Andre Michels, Xiaojie Tan, and Daoyou Feng, while four other women of Korean descent have yet to be named. Elcias R. Hernandez-Ortiz was also injured but experienced wounds that were not life-threatening. It’s still not yet known whether the women worked at these spas and what relationship, if any, they had to the shooter.

These attacks echo a chilling dynamic that has been observed in the data about anti-Asian incidents overall, which have found that women are twice as likely to report experiencing such attacks and harassment as men, and that elderly people and children comprised nearly 20 percent of the reports. This data seems to indicate that attackers across the board have sought out those who they perceive to be more vulnerable, a perception that’s inextricably linked with gender and race.

In the case of the shootings on Tuesday, the attacks targeted people who the suspect allegedly saw as cause for “temptation” because they were simply present at these spas. According to the police statements, Long aimed to remove this temptation from his life by using violence.

That impression, both of these establishments as venues for “temptation” and of the people who were on site, stems from entrenched tropes about spas and Asian American women, who’ve been framed as hypersexualized beings.

Such stereotypes about Asian American women emerged in the 1800s, and have since been reinforced again and again both during the Korean and Vietnam Wars, in American soldiers’ treatment of Asian women, and in depictions in popular culture, like that of the geisha in Madame Butterfly. Over time, Asian American women were painted as subservient, docile, and the focus of objectification and colonization, rather than people deserving of genuine understanding and engagement. As Patricia Park writes for Bitch Media:

The perception of sexualized Asian women was informed by a long tradition of the Western male writing and controlling that perception, leaving the women with no agency and no control over their own representation. Asian women in the media have been few and far between; what few there were often had no choice but to take on the archetypal roles of Asian females.

The problem with the stereotype is that it dehumanizes Asian American women and reduces them solely to sexual objects. That dehumanization, in turn, perpetuates violence toward these groups, and condones it.

This dynamic, coupled with the pervasiveness of the “model minority myth,” which seeks to drive a wedge between minority groups and treats the Asian American experience as an exceptional and homogenous one, renders the pain and violence that Asian American women endure invisible.

“Dehumanization creates a climate that makes violence excusable,” says Morgan Dewey, the development coordinator for the National Network to End Domestic Violence. “Forty-one to 61 percent of Asian women report experiencing physical and/or sexual violence by an intimate partner during their lifetime. This is significantly higher than any other ethnic group.”

The conversation surrounding Tuesday’s shootings has some similarities to the one surrounding violence toward Asian American elders as well. Although recent attacks on senior citizens who have been pushed to the ground or robbed might not be tied to the coronavirus, the decision to attack them specifically could still be a racialized one.

“When an Asian person, elderly or otherwise, is attacked because they are seen ‘as easy or lucrative targets,’ that in itself does not discount ‘racial animus,’” the Asian American Justice and Innovation Lab previously wrote on Instagram. “Without a doubt, one can be seen as an ‘easy or lucrative target’ precisely because of how they are racialized as an Asian person.”

Asian Americans are often viewed as easy marks for crimes like mugging, for instance, because they are less likely to report such incidents, and because some members of the community don’t speak English fluently. Several of the recent attacks have also been concentrated in Chinatowns across the country, which include many immigrant residents who are likely to be lower-income and less visible. In other words, they’re profiled and attacked specifically because of their ethnicity and vulnerability.

When it comes to the Atlanta shootings, the suspect’s claims about his actions ultimately highlight just how connected they are to race and gender, issues that can’t be divorced from these crimes and the efforts to understand the motivations behind them.

Law enforcement suggesting the suspect in the Atlanta shootings was motivated in part by his sex addiction doesn’t absolve us from having conversations about race, anti-Asian violence and the fetishization of Asian American women.

By clamping down on DC rioters, Airbnb is finally acting like it owns the place
10 ways Biden should fix the EPA
The new Covid-19 case surge in Europe, explained
Trump’s Afghanistan peace deal just hit its first major obstacle
Exclusive: Tony Blair sees dangerous times ahead for Western democracies
Jay Inslee, the climate candidate of 2020, is ending his campaign