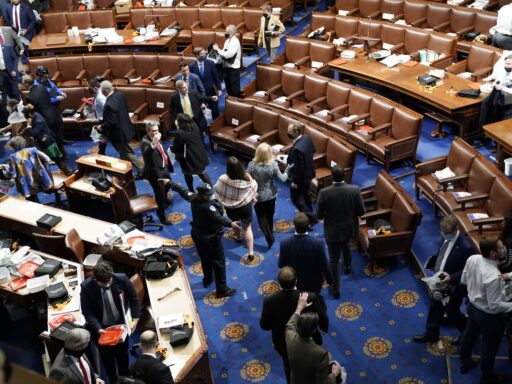 Lawmakers may have been exposed to the coronavirus during Wednesday’s riot.

Congress’s attending physician warned House members on Sunday that they may have been exposed to the coronavirus last week, after evacuating from the House chamber when pro-Trump insurrectionists stormed the US Capitol.

In an email, attending physician Dr. Brian Monahan wrote that, after evacuating to “a large committee hearing space,” members “may have been exposed to another occupant with coronavirus infection.”

NEW — the attending physician has sent out an email saying that people in the safe room during the riots may have been exposed to the coronavirus. pic.twitter.com/iqxYHG32ye

“Please continue your usual daily coronavirus risk reduction measures,” Monahan goes on to say in the email, and “obtain an RT-PCR coronavirus test next week as a precaution.”

Monahan’s warning is especially stark in the context of a video obtained last week by Punchbowl News — a new news outlet started in early 2021 by a handful of Politico alums — that shows evacuated House members unmasked and in close quarters with each other.

In the video, one lawmaker — Rep. Lisa Blunt Rochester, a Delaware Democrat — can be seen offering other members masks, but many turn down the offer.

“While I was disappointed in my colleagues who refused to wear a mask, I was encouraged by those who did,” Rochester said in a Friday tweet after the video became public. “My goal, in the midst of what I feared was a super spreader event, was to make the room at least a little safer.”

While I was disappointed in my colleagues who refused to wear a mask, I was encouraged by those who did. My goal, in the midst of what I feared was a super spreader event, was to make the room at least a little safer. https://t.co/HpEZdUzHbd

It’s unclear if the room in the video is the same one Monahan’s email warns was the location of a potential coronavirus exposure, but the footage, combined with the email, raises the alarming possibility of a Covid-19 outbreak on Capitol Hill.

Since Wednesday, at least one House member — Republican Rep. Jake LaTurner of Kansas — has announced that he tested positive for Covid-19, though it is again unclear if LaTurner is the person with a coronavirus infection referenced in Monahan’s email.

LaTurner, a first-term member of Congress, confirmed in a tweet that he tested positive on Wednesday night — the same day the Capitol was attacked.

“Congressman LaTurner is following the advice of the House physician and CDC guidelines,” a tweet from his official account said, “and, therefore, does not plan to return to the House floor for votes until he is cleared to do so.”

Congressman LaTurner is following the advice of the House physician and CDC guidelines and, therefore, does not plan to return to the House floor for votes until he is cleared to do so.

There also are obvious coronavirus concerns about the mob of largely maskless pro-Trump insurgents who swarmed the Capitol on Wednesday. Many of these insurrectionists were in close contact with members of the Capitol Police while lawmakers evacuated.

“You cannot keep distance if you’re trying to leave a very intense and dangerous situation,” one expert in respiratory virus transmission, Seema Lakdawala, told the New York Times last week. “You’re weighing the risk of your life over the risk of getting a virus at that moment.”

Also of concern is that if the events of Wednesday result in additional Covid-19 cases — or even morph into a superspreader event, though there is currently no evidence that has occurred — Congress is a particularly vulnerable population.

In particular, age is a significant risk factor for cases of severe Covid-19. According to Mayo Clinic, about 80 percent of US deaths from the virus have been people age 65 and older — and the average age of House Democratic leadership in the 116th Congress (the 117th Congress began just last Sunday) was 71. The average age of the entire Democratic caucus in the previous Congress was 58, and for the Republican conference, 57.

One fact that could help limit any potential spread, however, is that many members of Congress — including the top-ranking members of each party in the House and the Senate — have already received the the first of two Covid-19 vaccinations, hopefully lessening the risk of an outbreak. As Vox’s Kelsey Piper has explained, “getting just one dose still reduces a person’s chances of getting Covid-19 by 80 to 90 percent, at least initially.”

Congress has been spared the worst of the Covid-19 pandemic

Despite the risk factors on Capitol Hill, Congress has thus far been spared the worst of the coronavirus pandemic. As of mid-December, 49 members across both chambers had tested positive for Covid-19, though that number has since grown, and there have been no deaths among serving members.

However, Representative-elect Luke Letlow, 41, died of the coronavirus in late December, just days before he was set to be sworn in as a member of the 117th Congress.

Even elderly members of Congress, such as Iowa Sen. Chuck Grassley, 87, who tested positive in November, have come through the experience in good health, though Alaska Rep. Don Young, also 87, said on Twitter after surviving the virus that “very frankly, I had not felt this sick in a very long time.”

Very frankly, I had not felt this sick in a very long time, and I am grateful to everyone who has kept me in their thoughts and prayers. Unfortunately, a lot of what you may have heard about my condition was based on speculation in the media that did not respect my privacy.

That’s in sharp contrast to the plight currently facing the country at large: Overshadowed by Wednesday’s insurrection on Capitol Hill, the US on Thursday reported the single highest one-day death toll of the pandemic with 4,112 deaths.

On Friday, the US also recorded 300,000 new cases in a single day for the first time ever, reporting 300,594 cases. On average, the country has reported 253,958 new cases per day over the last seven days, according to the New York Times.

The broader US vaccine rollout is also well behind pace, with only 5.9 million people vaccinated as of Thursday, far short of the 20 million the Trump administration said would be vaccinated by the end of December.

It’s possible the tide will turn in the near future: Dr. Anthony Fauci, the nation’s leading infectious disease expert, said last week that though the initial vaccine rollout has stumbled, “I believe that we will pick up momentum as we get beyond the holiday season into the first couple of weeks in January.”

And President-elect Joe Biden, who will be inaugurated in 10 days, has pledged a large-scale vaccine effort to get “at least 100 million Covid vaccine shots into the arms of the American people” within his first 100 days in office.

To do so, Biden has said he will make a somewhat controversial change to the US distribution strategy, releasing all available doses at once. Both vaccines currently authorized for widespread use in the US require two doses, and the Trump administration had chosen to hold back doses to ensure those who get their first dose are guaranteed to have a second available when they’re scheduled to receive it.

But even if the US vaccination effort improves in weeks to come, right now the pandemic is tearing through the US all but unchecked — and Wednesday’s events could have left Congress more vulnerable than ever to the virus.