The backlash against Michael Che and Colin Jost as Emmy hosts, explained 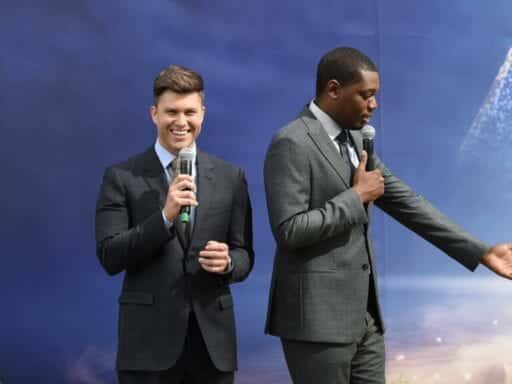 The pair have a history of bad jokes and an inability to take criticism.

Michael Che and Colin Jost seem to have mixed feelings about hosting the 70th Primetime Emmy Awards: In an interview with the LA Times last month, the duo came off as ambivalent about the gig, with Che implying that he hadn’t really liked an awards show since childhood and Jost describing awards shows as “way too self-serious and focused on things that 99 percent of the country doesn’t care about.”

In fairness, the reaction to the news of Che and Jost hosting the Emmys has also been mixed, though for decidedly different reasons.

Over their four-year tenure as co-hosts of Weekend Update on Saturday Night Live, as well as the show’s head writers, Che and Jost haven’t exactly become fan favorites. But there’s a bigger reason that some audiences are skeptical about them presiding over television’s biggest night: The two men’s history with both regressive humor and poor handling of criticism has caused some to wonder whether they are the right fit to spearhead the first Emmys of the #MeToo era.

The #MeToo Emmys, hosted by #NotAllMen

I’m not strong enough for a Che/Jost “Isn’t it tough to be a comedian in 2018” Emmy show. I’ll be watching the Bears game tonight. Let me know if anything crazy happens.

We won’t know the answer to that question until the ceremony, but in the meantime, here’s a rundown of what’s behind the skepticism over Che and Jost hosting the Emmys and what it says about the state of comedy in 2018.

Setting aside Che and Jost’s apparently lukewarm feelings about hosting the Emmys, much of the discontent over their role in the ceremony boils down to frustration with the fact that two men are hosting a ceremony that arrives in the wake of the #MeToo and Time’s Up movements, as well as an increasing effort to ensure gender parity in Hollywood and elsewhere. It’s not a context that plays well with Che and Jost’s history of offensive jokes and their response to criticism, especially as greater scrutiny is being placed upon gender issues and comedy in a post-#MeToo world.

Two years ago, Jost was accused of making transphobic jokes during a Weekend Update segment about the fallout from the 2016 election, quipping that Tinder’s update to include 37 different gender identity options was “why Democrats lost the election.” In response to backlash over the joke, Jost tweeted a link to an op-ed on “post-identity liberalism,” but he’s never fully addressed the incident or apologized for the joke. (He’s also been roasted for coming across as out of touch, as per his recent “guide to the Hamptons.”)

Che, meanwhile, recently drew heat for seemingly defending Louis C.K. after C.K. resurfaced for the first time since admitting to sexual misconduct. When asked what he thought C.K. “deserved,” Che wrote in an Instagram story: “i really don’t know. i haven’t talked to him in a while. i don’t know any of his accusers. i don’t know what he’s done to right that situation, and it’s none of my business. but i do believe any free person has a right to speak and make a living.”

SNL’s Michael Che has some thoughts about Louis C.K. returning to the stage: pic.twitter.com/bLlKS3UVmH

Che clarified his meaning in a recent interview with NPR, saying that, “I truly think him going onstage and not addressing anything was insane,” but ultimately stood behind his assertion that “everybody has the right to defend themselves.”

That was just the latest in a string of controversial sentiments from Che, coming after both a defense of street harassment (he compared it to being recognized as a celebrity on the street, and his subsequent apology was disingenuous at best — “sometimes i forget that i belong to all of you now, and that any thought i have should be filtered through you, and receive ur approval”) and a startling incident in which he encouraged his followers to go after a reporter who criticized him.

Earlier this year, the Daily Beast’s Samantha Allen wrote about transphobic jokes in comedy, calling out comedians like Ricky Gervais and Bill Burr for transphobic material in their routines. Che was also named in the piece for a joke in his 2016 standup special Michael Che Matters, and Che posted to Instagram in a way that made it seem like he was encouraging his followers to flood Allen’s inbox. (Allen confirmed to Jezebel that the post prompted emails from Che’s fans.)

Shortly after screencaps of Che’s posts were put on Twitter by Paste magazine’s Seth Simons, Che targeted Simons as well.

For his part, Jost defended Che’s behavior to Vanity Fair, calling it “pure comedy” and saying: “He’s not trying to make a real important point. That’s the misconception, I think—is that there’s this big social point that he’s trying to make … instead of just, ‘This is the reality of how people interact now, and it’s insane.’”

Che may not have been trying to make a “big social point,” and, considered in a vacuum, the individual incidents that make up Che and Jost’s history of controversy may seem relatively minor. But together they suggest a comedic sensibility that feels like an increasingly poor fit for a Hollywood celebration in the #MeToo era.

Che and Jost were obvious choices to host the Emmys. That’s the problem.

One of the biggest, most difficult questions of the #MeToo movement has been whether any change that comes out of it will actually last, or if those accused of wrongdoing will simply rebound after a short time-out period. And in recent weeks, that question has been undermined by defenses that echo Che’s comments on Louis C.K., such as Norm Macdonald’s recent comments about C.K. and Roseanne Barr.

After saying that he was glad the #MeToo movement had “slowed down a little,” Macdonald sympathized with C.K. and Barr, who were in the public eye for sexual misconduct and racism, respectively; he later apologized for his words, tweeting that he would “never defend their actions.” However, Macdonald’s supporters have since come to his defense, saying that he “spoke the truth” in a way that runs parallel to Jost’s defense of Che’s Instagram antics.

All of this has created a context in which NBC opting for two male hosts with a history of brushing off offensive or controversial behavior comes across as more than a little tone-deaf — especially since the network is home to female talent capable of hosting an awards show: Kristen Bell, of NBC’s The Good Place, hosted the Screen Actors Guild Awards earlier this year, and Leslie Jones, also of Saturday Night Live (and nominated this year for Best Supporting Actress in a Comedy Series), has become a popular commentator since the Rio Olympics in 2016.

At this point it’s important to note that none of this automatically disqualifies Che and Jost — or any man, for that matter — from hosting an awards show post-#MeToo; earlier this year, Seth Meyers (SNL’s previous head writer and current host of Late Night with Seth Meyers) proved it was possible to successfully engage with the subject when he hosted the Golden Globes. But as pointed out by the LA Times, Meyers has “positioned himself as an ally for women and members of the LGBTQ community in the Trump era,” while Che and Jost haven’t really made any effort at making similar inroads with their comedy.

Meyers also hosted the Emmys in 2014, the last year NBC aired the event, and he was as obvious a choice then as Che and Jost are now: an established comedic voice with strong ties to one of the network’s most-nominated shows. But in making that obvious choice once again, NBC is signaling that it might be falling behind the times in an era when television, along with all of Hollywood, is under increased pressure to evolve.

Watergate had tapes. Trump has tweets.
Rise of Skywalker’s huge opening weekend was still a big miss by Star Wars standards
What happens to Black Friday crowds in a pandemic?
A philosopher makes the case against free speech
The coronavirus crisis has revealed what Americans need most: Universal basic services
Dear Michael Bloomberg: Thank you for not running for president