The battle over DACA comes to the Supreme Court 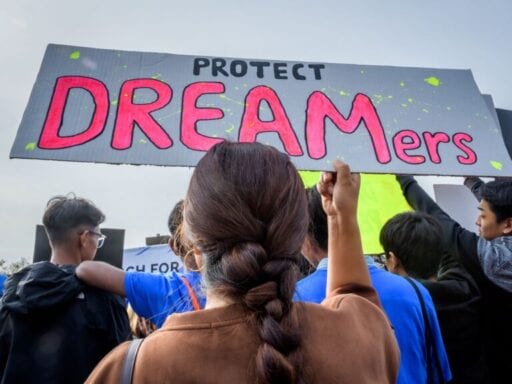 Share
Loading...
Protesters in Manhattan marched on October 26, 2019, for the preservation of Deferred Action for Childhood Arrivals, the Obama-era program that protects immigrants who came to the US as children from deportation. | Erik McGregor/LightRocket via Getty Images

The fate of some 670,000 immigrants hangs in the balance.

The legal status of hundreds of thousands of unauthorized immigrants who came to the US as children is at stake Tuesday when the Supreme Court hears arguments over the Trump administration’s decision to end the Deferred Action for Childhood Arrivals (DACA) Program.

President Donald Trump announced that he was terminating DACA back in September 2017. Lower courts have since kept the program alive, shielding almost 670,000 unauthorized immigrants who came to the US as children from deportation.

The Supreme Court in June announced that it would hear the case, which consolidates three separate legal challenges, but its decision is not expected until 2020. In the meantime, immigrants who rely on the program, known as DREAMers, are living in limbo, not knowing whether they will be allowed to remain in the place they call home. And tens of thousands of other immigrants who would be eligible for the program, which has stopped accepting new applicants until legal challenges are resolved, are waiting for their chance to apply.

There are two major issues at stake before the Court: whether courts even have the power to review Trump’s decision to terminate DACA and whether the administration provided sufficient reasoning for the decision.

The administration has pointed to a one-page September 2017 memo authored by then-US Attorney General Jeff Sessions, which lays out the argument that DACA is unconstitutional and that the administration should therefore end the program or else risk lawsuits challenging it on that basis. (Texas and other states have since joined a lawsuit asking a federal court to strike the program down.)

Lower courts, however, have found that the administration’s decision to end the program was “arbitrary and capricious” under the Administrative Procedure Act — the federal law that governs policymaking procedures — siding with immigrant advocates leading the legal challenges.

Depending on how the justices rule, their decision could reignite the debate in Congress over legislation that would offer the DACA population permanent protections. For nearly two decades, Republicans and Democrats have tried to pass such legislation, both as standalone bills and in broader reform packages, but have failed to reach agreement.

It’s a high-stakes case. Ending DACA is not only one of Trump’s signature policy decisions on immigration, but also a way for him to erase the legacy of former President Barack Obama, who created the program in 2012. A decision favorable to Trump — which would come in the middle of his reelection campaign — would give a boost to his restrictionist agenda.

“There is an entire generation of Americans whose futures are on the line,” Leezia Dhalla, a DACA recipient and spokesperson for the immigrant advocacy group FWD.us, said in an interview.

Congress has been at an impasse over DACA for years

The fate of unauthorized immigrants brought to the US as children has been a subject of contentious legislative debate for years.

The primary legislative proposal to attempt to tackle the problem was the DREAM Act, first introduced in 2001, which would have offered unauthorized immigrant students the opportunity to apply for provisional protection from deportation and then a green card. The act has been introduced in Congress numerous times over the years but has never mustered enough support to pass.

In 2012, President Barack Obama stepped in to create DACA via executive action. The program allowed young, unauthorized immigrants who came to the US before age 16 to obtain legal status and work authorization if they pursued education or service in the armed forces or Coast Guard and passed a background check.

Obama had previously voiced misgivings about unilaterally suspending deportations on multiple occasions. When asked about his goals for immigration reform in a 2010 interview with Univision, Obama said he needed Congress’s support: “I am president, I am not king.” The following year, Obama said it was “just not the case” that he could suspend deportations through executive order.

When he announced the DACA program in 2012, Obama conceded that the program was only intended to be a “temporary stopgap measure” and “not an amnesty.”

“This is not a path to citizenship. It is not a permanent fix,” he said.

Seven years later, the program has become more permanent than Obama intended. Citing Obama’s own misgivings and on Sessions’s advice, Trump has argued that his predecessor’s decision to create the DACA program by executive action surpassed his legal authority.

Last year, Democrats and Republicans failed to reach a compromise on DACA legislation during open debate on the Senate floor. There were hopes that the fact a vote in the Republican-controlled chamber was happening at all signaled political will for a solution. A compromise bill that would have paired border security funding with protections for DREAMers seemed the most likely to pass, but support fizzled after Trump threatened to veto it.

In June, the House — controlled by Democrats — passed a bill, known as the “Dream and Promise Act,” to protect DACA recipients. It offered a pathway to citizenship for about 2.5 million DREAMers and other immigrants with temporary legal status (the original DREAM Act was narrower, covering about 1.5 million people). Senate Majority Leader Mitch McConnell has said he is unlikely to allow a vote in the Republican-controlled chamber.

Democrats are still clinging to hope that the Dream and Promise Act could one day be enacted. But Emily Hampsten, a spokesperson for Sen. Dick Durbin (D-IL), told Vox that the Senate isn’t currently engaging in conversations about what to do if indeed the DACA program comes to an end.

“The onus is now squarely on Senator Mitch McConnell,” she said. “What the DREAMers will not allow is for President Trump to use them as bargaining chips to enact his hardline anti-immigrant agenda” — referring to Republican efforts to attach stringent border security provisions to any measures protecting DREAMers.

What happens if DACA ends

So where does this leave DACA recipients?

Acting US Citizenship and Immigration Services (USCIS) Director Ken Cuccinelli told reporters in October that, if the Supreme Court allows the Trump administration to move forward with ending DACA, those who have benefited from the program “will join the ranks of millions of people” living in the US without authorization. Though immigration authorities prioritize deporting immigrants with criminal histories, he said, it’s possible that DACA recipients could be deported as well.

If that’s the case, DACA recipients are concerned that their personal information, which they registered in a federal database when applying for the program, could be used by immigration authorities to track them down, Dhalla said. That data, which is housed in USCIS, includes their home addresses, passport photos, educational history, and fingerprints.

USCIS doesn’t currently share the data with US Immigrations and Customs Enforcement (ICE), which handles deportations, but it could down the line.

That means some 670,000 DREAMers, many of whom have lived in the US for more than a decade and have fully integrated into American life, could face the prospect of deportation. That would mean leaving behind their community and job and educational opportunities in the US to start over in an unfamiliar country.

According to seven years of survey data collected by the Center for American Progress, a liberal think tank, about 79 percent of DREAMers said that their increased earnings as a result of DACA have aided their families financially and 25 percent said that they helped take care of an elderly parent or relative.

“We’re not islands,” Greisa Martínez Rosas, a DACA recipient and deputy executive director of the immigrant advocacy group United We Dream, said. “Our families depend on our income to make health care decisions and for well-being and safety.”

If DREAMers were deported, they would also have to decide whether to take their US-citizen children with them back to their home countries or face the prospect of family separation. There are an estimated 256,000 children of DREAMers who could be affected.

“If there is a negative ruling in this case, there could be another family separation crisis,” Dhalla said.

Where the policy debate in Congress could go from here

If the justices affirm Trump’s move to end the program, it could could have immediate, devastating repercussions for the DACA population — and light a fire under Congress to reach a deal on permanent protections for DREAMers.

Cuccinelli said he expects “some discussion at the congressional, presidential level” over permanent protections for DREAMers, noting that Trump has appeared favorable to the idea.

The president has publicly praised DREAMers in the past, suggesting he was eager to sign a law offering them permanent protections in exchange for border security.

“Does anybody really want to throw out good, educated and accomplished young people who have jobs, some serving in the military? Really!” Trump tweeted in September 2017. “They have been in our country for many years through no fault of their own.”

But despite such public displays of empathy, Trump himself has on multiple occasions sabotaged deals in Congress on permanent protections for them.

Douglas Rivlin, a spokesperson for the immigrant advocacy group America’s Voice, said in an interview that, if hundreds of thousands of DREAMers lose their status as a result of the case at the Supreme Court, it will likely hurt Trump politically, since he himself has acknowledged that they are an extraordinarily sympathetic population. “This is not Trump’s preferred territory where he is keeping out people who he has labeled criminals,” Rivlin said.

That said, Trump’s hard-line immigration stance and calls for border security have been central to his popularity with his base. And heading into an election year, Trump may well feel the need to lean into his brand and fire up his core supporters.

If Trump does make an overture to pass legislation protecting DREAMers, immigrant advocates say they want a clean bill — meaning they don’t want it to include provisions that would bolster immigration enforcement.

“We know that they will try to use us as bargaining chips, and we are saying no,” Martínez Rosas said. “We will not engage in any negotiations that will bring about more enforcement.”

Advocates also want a permanent solution for DREAMers to be paired with one for immigrants with Temporary Protected Status (TPS), a protection allowing them to legally live and work in the US typically offered to citizens of countries suffering from natural disasters or armed conflict.

After President Donald Trump took office, he tried to end TPS status for El Salvador, Haiti, Nicaragua, Sudan, Honduras, and Nepal, asserting that conditions in those countries have changed such that their citizens can now safely return. But many of them have planted roots in the US for the better part of a decade and also have US-citizen children.

Rivlin said that TPS recipients are essentially facing the same problem as DACA recipients — they, too, are deeply embedded in their communities in the US. The “Dream and Promise Act” the House passed in June recognizes that, offering protections to both DACA and TPS recipients.

If a legislative fix is not in the offing, advocates are prepared to look to local governments for solutions. Martínez Rosas said her organization is reaching out to officials at the city and state level to ask them to stop cooperating with ICE on immigration enforcement. ICE usually sends requests to local law enforcement agencies to detain unauthorized immigrants that they encounter and also asks them to share information.

But regardless of these potential fixes in Congress and at the local level, Trump’s decision to end the DACA program has already disrupted the lives of hundreds of thousands of DREAMers, who have spent the last two years unsure of what the future holds.