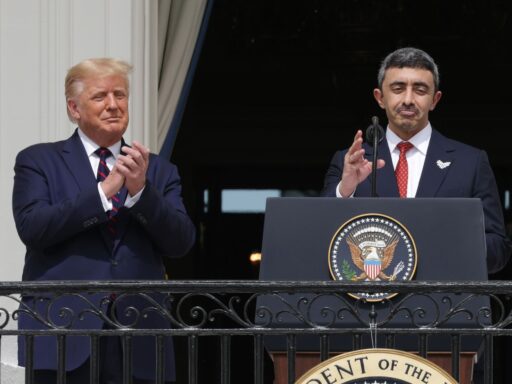 Trump wants to send $23 billion in advanced weapons to the Middle Eastern autocracy. Some aim to stop him.

On Monday evening, members of the Senate Foreign Relations Committee met for a classified briefing with Trump administration officials to hear about a proposed $23 billion weapons sale to the United Arab Emirates. Right when it ended, one of the attendees blasted what had transpired behind closed doors.

“Just a mind blowing number of unsettled issues and questions the Administration couldn’t answer,” tweeted Democratic Sen. Chris Murphy. “Hard to overstate the danger of rushing this though.”

That remark underscored the growing political fight over the arms deal announced in early November, a standoff that could severely impact America’s relations with its authoritarian ally and the military balance in the Middle East.

President Donald Trump wants to sell up to 50 F-35 fighter jets, nearly 20 Reaper drones, and around 14,000 bombs and munitions to the UAE — and he wants to do it before President-elect Joe Biden enters the Oval Office and potentially scuttles the sale.

The administration has explicitly linked the massive arms package to Trump’s broader efforts to counter Iran and to the UAE’s normalization of relations with Israel in August.

“This is in recognition of our deepening relationship and the UAE’s need for advanced defense capabilities to deter and defend itself against heightened threats from Iran,” Secretary of State Mike Pompeo said in a statement announcing his authorization of the sales. “The UAE’s historic agreement to normalize relations with Israel under the Abraham Accords offers a once-in-a-generation opportunity to positively transform the region’s strategic landscape.”

But some Republicans and Democrats in Congress, along with certain activist groups, oppose the proposed weapons transfer, saying a country responsible for killing civilians in Yemen and funding Russian mercenaries in Libya doesn’t deserve to be rewarded with even better US-made weapons.

“To sell such advanced military equipment to the UAE now would be to endorse those policies and threaten US interests and regional stability,” said Seth Binder, an advocacy officer at the Project on Middle East Democracy, who’s leading an effort by arms control organizations and human rights groups to stop the sale.

Which means the next 50 days before Biden takes over will see a nasty tussle over one of Trump’s last major foreign policy initiatives, one he’s trying to ram through before the clock runs out.

“This is happening way too fast,” said Michael Hanna, a Middle East security expert at the Century Foundation in New York City. “Process is important, substance is important, and neither is good here.”

Why the UAE wants US-made weapons

The UAE has long wanted advanced fighter jets and top-of-the-line drones, which would make it a greater, more powerful player in the region — not just militarily, but politically, too.

“We’re not talking about going to war here. We’re talking about affecting change in the Middle East,” said Dalia Fahmy, an expert on the UAE’s foreign policy at Long Island University. “The UAE is reasserting itself in the region. It’s all about being able to leverage that perceived power.”

In other words, the UAE wants the world’s most advanced warplane, the F-35, and surveillance and attack drones because it could then throw its weight around in the Middle East. That sounds fine in principle — after all, most nations seek to increase their power and influence whenever they can. But one big question is how — and where — exactly the UAE may try to do that.

The sale is “not helpful [for the US] if there is greater adventurism in Libya or the Horn of Africa,” said a State Department official, who like others spoke on the condition of anonymity because they weren’t authorized to speak to press. “It’s maybe helpful in a theoretical multilateral framework” against Iran.

Both Trump and Biden would certainly rather see the country use the weapons against Iran in case of a war and not, say, to bomb innocent men, women, and children in Yemen, where the UAE is fighting a war as part of a Saudi-led coalition.

Figuring out what assurances the US received from the UAE ahead of the sales took up much of Monday’s classified Senate hearing, according to two Senate sources familiar with the discussion.

Murphy’s tweet made clear the answers senators received weren’t satisfactory — and now he and others are trying to stop the transfers from happening.

There’s a five-pronged case against the UAE arms deal

“Congress is once again stepping in to serve as a check to avoid putting profit over US national security and that of our allies, and to hopefully prevent a new arms race in the Middle East,” Menendez said in a statement at the time.

Those resolutions must be voted on and passed by December 11 or they will expire, clearing Trump’s pathway to the sale. But whether or not the blocking effort works, the resolutions do help make clear the five main arguments against the deal.

The first, as mentioned above, is that the UAE could use the weapons indiscriminately, killing civilians in Yemen or elsewhere. Without clear guarantees that that won’t happen, the senators and activists don’t want the measure moving forward.

The second concern is that Israel could lose what’s called its “qualitative military edge” (QME) in the Middle East. Simply put, US policy since the 1973 Arab-Israeli war has been to ensure that Israel has more powerful forces than its Arab neighbors. Israel and others fear giving the UAE F-35s and drones might erode that advantage.

However, that issue “has receded in importance” more recently, said Barbara Leaf, the US ambassador to the UAE from 2014 to 2018. The main reason is that in October, Israel’s government dropped its objection to the F-35 transfers in particular, soon after the Pentagon promised Jerusalem its edge would remain intact.

“It’s now more about the foreign policy dimensions of the proposed sale,” Leaf told me.

Which brings us to the third objection: that the UAE having this advanced weaponry could change the balance of power in the Middle East, making the Gulf country an even stronger, more influential regional player. If that were the case, experts told me, the UAE might use its newfound strength to attack its enemies, namely Iran, on its own and back other proxies in the area.

But some aren’t so worried about that possibility. “This won’t change the military balance in the Middle East,” said Leaf, now at the Washington Institute for Near East Policy in Washington, DC. “Iran’s missile and nonconventional arsenals are formidable and could wreak immense damage, even if the UAE gets the F-35.”

The fourth concern is the potential for an arms race. Basically, if the UAE gets a lot of advanced weapons, others — like Qatar and Iran, the UAE’s adversaries — might want them, too. At that point, each country may continue to buy more and more weapons until the region becomes increasingly militarized and dangerous. That’s an outcome many experts hope to avoid, although such a possibility remains far off.

The fifth worry is that the Trump administration is ramming through in a matter of months a deal that would normally take years to complete. “This is definitely being rushed through. That’s abnormal and bad practice,” said the Century Foundation’s Hanna.

What normally happens is that a deal is painstakingly worked out between the two parties first, then reviewed closely by the State Department and the Pentagon, and then long-term consultations with Congress begin. One item up for debate would be the Israel issue, for example, which could take years to hash out.

In this case, the Trump administration wants to go from an announcement in November to a sale before January 20, the day Biden is sworn in as president. That’s just unheard of, especially for an arms package of this size.

That’s why one Senate aide told me they don’t want to see the deal go through before “they’ve dotted the i’s and crossed the t’s.”

Until then, the backlash against the deal is likely to persist.

Swing voters are extremely real
Now with more money than anyone else, Elon Musk faces a new challenge: How to give it away
I'm a woman who fought wildfires for 7 years. Climate change is absolutely making them worse.
Immigration is no longer a winning issue for Trump
Kathleen Turner dragged a high-paid actress for having no range. Here’s who it might be.
I want to donate plasma for an experimental Covid-19 treatment. Because of homophobia, I can’t.