The best $1.50 I ever spent: a kneadable eraser 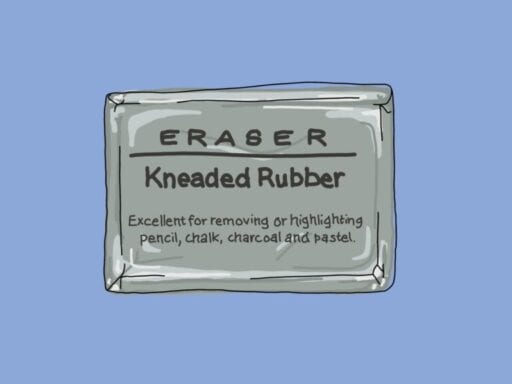 It’s the best method I’ve found to keep myself from fussing with my eyebrows.

The first time I devised a plan to stop fidgeting with my eyebrows, I went to Duane Reade for a box of Just For Men beard dye. It was 2015, I was writing about fashion, and the model Cara Delevingne had recently ignited a craze for bold, heavy eyebrows. It was a cool look, which was a helpful cover for routinely tinting my eyebrows — which are naturally blonde and visible like a ghost in daylight — a shade of light brown.

What I was really after was accountability. For years I’d been in the habit of compulsively rubbing my eyebrows as a self-soothing mechanism in situations where I was feeling stressed, bored, tired, or relaxed, which was most of the time. The constant friction had worn away patches of hair, and I thought that if I made the damage fully apparent to myself, using a $10 box of beard dye, maybe I’d find the motivation to stop. That if I groomed my eyebrows regularly and filled in the holes with brow pencil when I went out in public — treating them with respect, while also making smudges a liability — the impulse would fade for good.

It didn’t, and this is not an essay about beard dye.

Today my left eyebrow gets most of my attention, but I’ll ruffle both at once when a personal or work problem starts to seem insurmountable and my anxiety swells, as though literally ballooning in my chest, pressing so tightly against my ribs that I think I might burst. At times this activity carries me from mid-morning right up until the moment I fall asleep, with breaks for exercise (physically impossible, though I’ve tried) and face-to-face time with other people (usually too engaging). It’s what psychologists call a body-focused repetitive behavior, similar to but not exactly the same as trichotillomania, the compulsion to pull out one’s hair.

I work my eyebrows to calm myself, but more often than not it has the opposite effect, because once I begin, I struggle to stop. Doing so is like prising apart two very strong magnets that snap back together when you release your grip. When I decided to start dyeing my eyebrows, my habit had me feeling deeply ashamed: unspeakably weird, unpresentable, unprofessional, and out of control.

This was most distressing at work, and work was where I felt most compelled to pick. Everyday office tedium was one cause, and an as-yet-unfounded fear of disappointing my editors, which reared its head while I raced to hit deadlines, was another. Half of my brain would be thinking about the article I was writing while the other half managed what felt like a hostage negotiation over my eyebrow rubbing. It went something like this:

Stop. Stop now. Aaaand stop. This is the last time, and then you’re going to stop forever. Okay, just stop.

This bargaining played on a loop for hours.

For a while, tinting and filling in my eyebrows did actually help. My face felt mostly, blessedly off-limits during the workday. But it’s easy to feel keen on a new self-improvement project. As its novelty gradually faded, so did my resolve. I let my eyebrows return to their natural color.

I work my eyebrows to calm myself, but more often than not it has the opposite effect, because once I begin, I struggle to stop

Following in the steps of countless millennials, I started going to an evening art class earlier this year in a desperate attempt at self-care. I’d recently gone freelance, and a combination of taking on too much work and not knowing how to mitigate the daily isolation of my new job threw me into a sad stress hole from which I was struggling to find an exit. I was into drawing as a teenager, so live figure sessions seemed like a good replacement for an evening that I would otherwise spend worrying about imminent failure.

For $10, you get to sit in a studio with a bunch of friendly strangers and sketch a nude model, to whom everyone is extra gracious. You can bring a beer if you’d like. There is no instruction, but a staffer occasionally calls out for pose changes and breaks over the course of two-and-a-half hours.

I discovered that this is precisely the amount of time I needed to shake off the hundred tiny work demons clinging to my clothes at the end of the day — the ones who say things like, “Let’s imagine what it would be like to get sued by that person you’re profiling!” and, “If you blow just one deadline, your career will be over!”

A redirection of energy takes place. Each drawing session begins with irritation at myself (“Why aren’t my hands and brain cooperating?”), which fades into defeatism (“I am terrible at this”), and then apathy followed by good-humored resignation (“You are here for the next two hours, so you might as well make the most of it”). Then I can finally have fun. When my speaking mind chimes in again, it’s usually with some degree of delight (“I made a thing!”). Drawing is like lifting my brain out of my head and setting it down beside me to take a nap while I work. When I pop it back in at the end of class, it feels quieter and better. Some people say hobbies are a form of meditation, and they’re right.

For these sessions, I bought a few pencils, a notepad, and a kneaded eraser, the gummy gray kind that doesn’t leave behind pilled rubber when you use it. It cost less than $1.50. I’d used kneaded erasers before, and one day it struck me, as I was evaluating my eyebrow habit for perhaps the trillionth time in my life, that it might be a satisfactory alternative to scraping my fingernail across the prickly bald patch above my left eye.

Fidget objects are a classic tactic for rerouting body-focused repetitive behaviors. Around the time that I experimented with eyebrow tinting — the height of my stress over my habit — I’d also seen a therapist. She was a nice woman with good suggestions, like playing with rubber bands instead, or applying lotion to my hands, or encasing them in tube socks when I got home from work. I shot down her ideas one by one: The rubber bands just didn’t do it for me, I find hand lotion repulsive, I wanted to text. When I ended my sessions with her a few months later, it wasn’t with the self-punishing frustration that had brought me to her in the first place, surprisingly. I discovered that I just didn’t want to try that hard. So I went to town on my eyebrows again, with slightly more fatalism than before.

I wasn’t expecting much from the eraser, but it turned out to be a solid distraction: good enough to keep me from touching my eyebrows for an hour or two at a time, sometimes more. You pull it apart, creating a bridge of soft, pale gray putty, and then you fold it back on itself, packing it down until it looks like a small stone. You repeat this motion over and over, heating up the rubber and your biceps in turn. I put the eraser in a plastic sandwich bag and started carrying it around with me, pulling it out when the first urges of the day struck.

This is not a success story in the conventional sense. When you use an eraser, a shadow of your old work remains on the page. I still fidget with my eyebrows every day. I’m not sure this eraser would be the best $100 I ever spent, or even the best $20, because that was a ticket to “Mamma Mia 2: Here We Go Again!” But just like the drawing class it serves, it buys me pockets of time away from the furious commentary in my head, allowing me to bob up to the surface for a lungful of air. For $1.50, I think that’s incredible.

I don’t even mind that it’s a part-time solution. A few years ago, I was constantly putting pressure on myself to stop messing with my eyebrows, right this second and then forever. I’ve started seeing a new therapist who’s nudged me toward learning how to de-escalate, because admitting to myself that it’s okay if I never stop this habit makes it feel less overwhelming. I feel more in control.

Maybe a year after I stopped tinting my eyebrows, I got dinner with two close friends from college at a noodle spot in New York. We wound up talking about the things we do with our hair: One tugged at her ponytail, which I was aware of, and the other pulled out his facial hair, which I was not. As we got into the weird specifics of these habits we try to hide from others, including our friends, it started to seem very funny. We were all in the muck together, and the muck was fine.

Eliza Brooke is a freelance writer who covers design, style, and consumer culture. In her spare time, she goes for walks and watches Graham Norton clips on YouTube.

8 winners and 5 losers from the topsy-turvy 2019 Emmy Awards
Vox Sentences: Turkey continues its slow slide toward authoritarianism
Why Trump’s attempt to steal the election was too much even for Republican judges
Study: 71 percent of jobless Americans did not receive their March unemployment benefits
Trump says tariffs are working “big time.” Here are 5 pieces of evidence that’s not the case.
More than 200 tornadoes devastated the Midwest over 13 days. Why?