The best $129 I ever spent: Baby formula 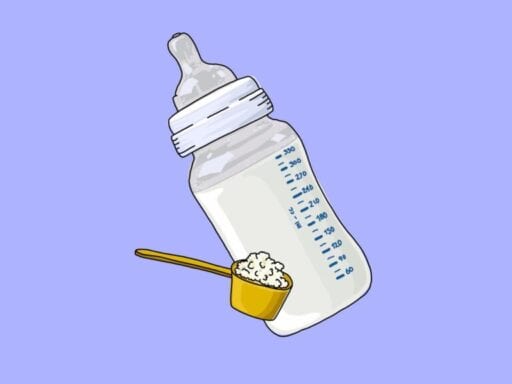 After months of trying to breastfeed my son, I finally decided it wasn’t working for anyone.

When I was seven months pregnant with my first (and only) child, I found myself sitting in a “Breastfeeding Basics” class at a nearby hospital.

For the first part of the three-hour, $45 class, I diligently took notes as the nurse talked about the importance of skin-to-skin contact and breast milk antibodies and bonding with your child. After her feel-good lecture, it was time to use a raggedy doll provided by the hospital to practice the “football hold” and the “rugby hold” and the “cross cradle,” to name just a few of the breastfeeding positions that I would later struggle to master.

When the nurse asked us to hold the dolls up to our chests as if we were actually breastfeeding, I stared in horror as the women around me obeyed. I pinned my doll down on the table with my hand in an act of prenatal rebellion, unable to lift it to my breast and pretend that this plastic baby was anything close to real. As soon as the bathroom break came, I snuck out the door and into the parking lot, never to return. I was still determined to breastfeed, but I drew a line at faking it with plastic dolls.

When I got home from class, inside my Breastfeeding Basics folder I discovered a pamphlet of information about a hospital support group for women struggling to nurse. Despite this hint of potential trouble ahead, I remained committed, because who wouldn’t want to give their child the best possible nutrition? The World Health Organization says, “Breastfed children perform better on intelligence tests, are less likely to be overweight or obese and less prone to diabetes later in life. … Inappropriate marketing of breast-milk substitutes continues to undermine efforts to improve breastfeeding rates and duration worldwide.” It felt like everything I read made breastfeeding versus formula sound like a grave international conflict, and that I, as a childbearing woman, better fight the good fight.

Still, throughout my pregnancy, I proudly declared to friends, family, and strangers in that Breastfeeding Basics class, “I’m not going to kill myself trying to breastfeed. If it doesn’t work out, I’ll switch to formula.” To diffuse any incoming scorn, I would add, “My parents gave me formula and I don’t have two heads!” This go-to joke was my way of covering up anxiety and painting myself as a casual mom-to-be.

Despite my false confidence, I secretly longed to become one of those blissed-out moms who made breastfeeding look like a mystical bonding experience. I envisioned myself as a mother who could casually cradle a plump infant to her breast while walking down the street or eating at a restaurant or running an ultra-marathon or doing yoga. I wanted to succeed, like the celebrity moms sharing photos of themselves looking blindingly euphoric as they nursed their babies while getting their hair and makeup done by a team of professionals before an event. I didn’t have a glam team or any fancy events to attend, but I would gaze at these photos and think, This is what’s in store for me! It seemed like such a privilege and a natural extension of giving birth. Sure, there were support groups for breastfeeding, but how hard could it really be?

As the nurse leading my Breastfeeding Basics class had declared, “It’s the most natural thing in the world.” There was a subtle militance in her tone, which had pierced my chill mom persona and strengthened my secret desire to become a wellspring of nourishment for my child, by any means necessary. The nurse had also added that, unlike formula, breastfeeding was free. It’s hard to argue with that logic.

Before all of this, I had spent two years trying to get pregnant. Two years battling with my body, which refused to do what I so desperately wanted it to. When I finally did get pregnant, after two pricey IUIs and two rounds of IVF that were not covered by insurance, the fact that my body had stopped revolting and started cooperating felt miraculous. I was elated to be carrying a child. While I still occasionally declared that I would be perfectly fine not breastfeeding my son, the idea of formula feeding went from a casual joke to a source of shame. I had been through so much, and had spent so much, to become a mom. I think I just wanted the rest of the journey to feel natural and easy, and somewhere along the way, breastfeeding became a symbol of that ease.

My husband didn’t care if we fed our son formula. My mom, who gave formula to all four of her daughters, couldn’t understand why any woman in her right mind would choose to breastfeed. Still, as soon as my son was born, breastfeeding became a battle I was determined to win. I struggled to get him to latch on in the hospital. I was terrified, full of nerves and adrenaline, and no amount of coaching and prodding and manhandling from the nurses or the lactation specialists who popped in for visits could save me. Occasionally my son and I would almost get it, but then we would both end up in tears. The fear and stress of not being able to feed your child is a powerful force, and during those two days in the hospital a primal sort of mania welled up inside of me. I was on a mission; I would defy my body and emerge triumphant, with a healthy child full of vitamins and proteins and precious antibodies.

For three long months, I pushed myself to the mental and physical brink trying to nourish my son. I barely slept, hardly showered, and I cried my way through painful marathon “cluster feedings” in which my son nursed for hours on end but still didn’t get the nutrition he needed. I had to supplement with formula occasionally, but I was fiercely determined not to stop breastfeeding, to make it work, to make it seem like “the most natural thing in the world.” My stress probably didn’t help the situation. I thought about calling a lactation consultant, but the $200-$250 an hour price tag scared me away, especially since I calculated that it would take much longer than an hour to rectify the situation.

As I sat there day after day, attached to a pale pink torture device also known as a breast pump, I would wonder if my body was failing me, like it had when I was trying to conceive. My younger sister breastfed all three of her children for a full year each, and she made it look so easy. She always had a freezer full of bags of breast milk, so why was my body only producing a sad little thimbleful of the stuff? If I did ever have enough milk to store in the refrigerator (never the freezer), I would feel elated, like I’d just been admitted to the cool girls club in middle school. Then the milk in the refrigerator would get used up, and there I’d go, trudging back to the breast pump to fight another day.

It wasn’t all horrible. Occasionally I would experience a moment of bonded bliss, when things worked out and my son latched on, and I could stare down at his perfect little face in the 3 am quiet as oxytocin flooded my body. Those moments were precious, but for every day of blissful breastfeeding, I experienced five more days of pure hell.

I could run in front of a bus for him, or jump into a burning building, but breastfeeding? That turned out to be too much.

One day, three months in, I sat at the mercy of the dreaded breast pump, watching in tedious agony as milk slowly filled the container. When it was finally filled, I stood up to turn off the churning pink machine, and the entire container of precious milk spilled onto the floor. I flopped down onto the floor by the spilled milk, and I cried. It was a horrible feeling, like coming to the end of a marathon but my body wouldn’t let me take another step, and in that moment, I knew I couldn’t do it anymore. I couldn’t pretend to be a selfless maternal goddess who would sacrifice all for her child. I could run in front of a bus for him or jump into a burning building, but breastfeeding? That turned out to be too much.

I talked to my son’s pediatrician, who thankfully refrained from shaming me, and instead said, “As long as he’s eating, I’m happy.” I immediately bought a one-month supply of the formula I’d been using to supplement, for $129.86. Physically, the transition wasn’t difficult since I hadn’t been producing much milk anyway, and as soon as my son started on full formula, he was less cranky, helping me realize that maybe the poor kid had been crying all that time because he was starving. Breastfeeding or not, the mom guilt never ends.

Once the purchase was made and the decision was set, I felt a tinge of sadness, knowing that since I was only having one child, I would never again experience those sweet, rare, 3 am moments of magical bonding, and that once my son was weaned, there was no going back. But that loss didn’t compare to the overwhelming feeling of freedom and bliss that came from knowing that after three months of forcing my body and mind to cooperate, I could become a better mom because I could finally just be myself. It felt like the most natural thing in the world.

Dina Gachman is an Austin-based writer and the author of Brokenomics.