The best $190 I ever spent: a fan to ease my perimenopause 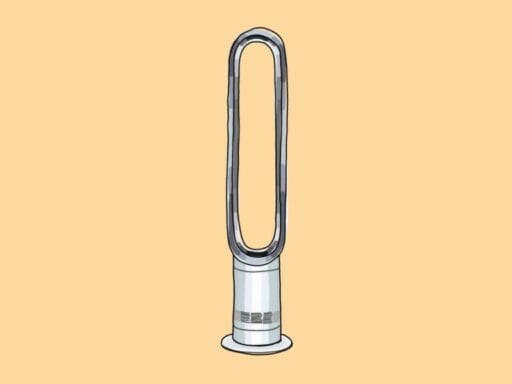 On getting older, drinking wine, and The Real Housewives of New York.

The Dyson fan arrived the same night I canceled a date because it was just too hot.

Everyone was hot, not just me, and I should have gone on the date. Margaritas and tacos with a 26-year-old musician is exactly the thing to do when it’s 90+ degrees and 10,000% humidity in New York City.

But I had been in the studio where I record my podcast, where the 20-something-year-old members of the production team insist on turning off the air conditioner for sound-quality purposes despite my pleas every week to keep it running: “The mics don’t pick up the AC, I promise. Please leave it on. I’m 42, and I’m hot.”

In response, they completely ignore me. They simply don’t get it, and in fairness, they have no reason to.

It’s possible that you, reading this, also simply don’t get it, and that’s okay, because I can explain: I am perimenopausal. Perimenopause means “around menopause” — menopause being the cessation of menstruation — and for most women, it begins in their 40s, though for some it starts earlier.

If that sounds vague and slightly menacing to you, well, yeah. It’s a vague thing. It doesn’t have a distinct starting point, and there are many symptoms, and you may suffer from some of them, or you may not, and cumulatively that lack of clarity translates for a lot of us to, “No one knows anything, just suffer quietly and possibly pump some hormones into your body.”

There are many ways the medical community has failed to serve women’s health needs, and a lack of information and treatment options around perimenopause is high on the list. One of the distinct symptoms of perimenopause, the one that most of us — according to Johns Hopkins, nearly 75% of women — endure are hot flashes. In my case, hot flashes began as night sweats in the last year of my 30s. I had always been a cold sleeper, a burrower, and all of a sudden I was waking up in a puddle.

“Ah well, it’s come for me,” I’d think, because the timing of those night sweats, always a day or two before my period arrived, was undeniably linked to my reproductive cycle. My changing reproductive cycle. The Mayo Clinic refers to perimenopause as a “progression toward menopause” and wow, doesn’t that evoke thoughts of the slow march toward death for you? It sure does for me!

There are many ways the medical community has failed to serve women’s health needs, and a lack of information and treatment options around perimenopause is high on the list.

I don’t generally lament getting older; I look younger than I am, and I date even younger than that. I’m rarely called ma’am, despite being well into ma’am territory. But there’s something about the physicality of the sweat that deposits a heavy pit in my stomach, that makes me feel awful, not just because I’m sticky and hot but because I am inescapably confronted with the reality of my advancing age. Because perimenopause, of course, also signals the beginning of the end of fertility.

Most people assume that because I don’t have children, I don’t like children. In fact, I quite like children, though there are a great many children I do not like, as is true of adults, and of dogs, too. I would have liked to have children of my own, but it simply did not happen for me; that is both a disappointment and a gift, in its way. I live a life relatively unencumbered by others, and there is a great deal of freedom in that.

When people ask — and oh boy do they ever ask! — about why I don’t have children, how I feel about it, if I plan to adopt, or take the turkey-baster approach to going it alone now that I am divorced, they get a canned answer. (You read a version of it, just now, “I would have liked to have children of my own, but it simply did not happen for me.”) I imagine that a great many other childless, or childfree, or whatever term best suits their attitude about the situation, women have canned answers at the ready as well.

Disappointment aside, I feel generally confident that not having children is the right thing for me. That in and of itself is possibly the biggest disappointment of all — I have failed myself. I have not turned out to be the woman I thought I’d be, or who I wanted to be. But then also there is this: My life is far (far, far!) more fun and interesting than I imagined it would be when I thought, perhaps vaguely, about what adulthood would look like. It’s a life of creative work, and one filled with many friends, a handful of whom are like family to me in that we spend holidays together and will care for each other as we age. There is no small amount of wine involved.

Many people probably look at my life and think, “Oh grow up,” and I get that, I really do. The thing is … I did grow up. And then I grew out of growing up. Without someone to put dinner on the table for every night, why should I have to put dinner on the table every night? Why shouldn’t I head downstairs to my local joint with my laptop and have a few (too many, okay) glasses of wine while I respond to the last of the day’s emails? Why not date men a decade and a half younger than me?

I like to think that I’m at peace with all of this, but the truth is that sometimes the sweat feels like a warning, like my body is signaling to me in the least subtle way “GIRL THE TIME TO PANIC IS NOW!!! WHO WILL CARE FOR YOU WHEN YOU ARE ANCIENT???”

But when I start to panic, when I imagine all the criticisms people make of me behind my back, I draw a cool bath, and climb in to splish and splash while catching up on my Bravo stories. I remind myself that I probably could not do this if I had kids; that I probably wouldn’t if I still had a husband. And that despite being single and childless at age 42, somehow there will be people to care for me when I am ancient.

There’s a scene in Real Housewives of New York that shows Carole Radziwill’s bedroom; the Dyson fan sits, unobtrusively, elegantly even, on one of her bedside tables. When I noticed it, because I notice everything, I recall thinking “Oh, that’s her menopause fan.” There was no judgment in that thought; it was a matter-of-fact observation borne of my immediate understanding of its meaning in the room of a 50-something-year-old woman.

Days before New York was to be walloped with a heatwave that would leave the city feeling like it was 107°, the window-unit air conditioner was already no longer enough to allow me to sleep comfortably, and I remembered Carole. Her same Dyson fan went on sale for $190, discounted from its usual price of $272, and so I took the plunge and ordered my own. I woke up the morning after the canceled date, alone, and thanks to the fan helping to circulate the cold air from the window unit, my bedroom was like an icebox. I felt elated. My fan, my beloved fan, would not only save my sleep, she would save my dating life.

I have named her Flo.

Jolie Kerr is a cleaning expert, advice columnist and host of the podcast Ask a Clean Person. She is a regular contributor to the New York Times.

How Trump’s new immigration plan could hurt the economy
Georgia’s Covid-19 cases aren’t declining as quickly as initial data suggests they were
Biden promises to appoint a black woman to the Supreme Court
The outcry over ICE and hysterectomies, explained
Kirstjen Nielsen briefs Congress on executive order
Voice of America reporters: Trump-backed CEO “is failing” the US