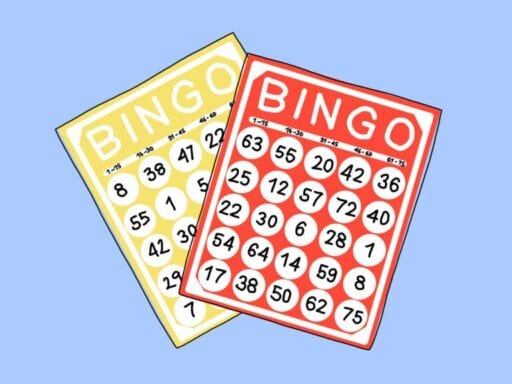 It’s the one activity where money becomes more magical and less weighty.

The one time in my life, aside from sleeping, when I’m not obsessing about money is when I’m playing bingo. I know that sounds ironic, but bingo is my mental escape, offering a few hours where the numbers in front of me all start with a letter, not a dollar sign.

I’ve been in debt my entire adult life, first with student loans from undergrad and the law school I never graduated from, then from living above my means — not hard to do on a $40,000 New York City salary.

In my 20s and 30s, I ignored my debt, thinking it would somehow eventually resolve itself (how, I’m not sure, but I assumed more money would simply materialize the older I got). When, at 40, I realized that wasn’t quite how real life worked, I dedicated myself to earning as much as I could as a freelancer, with a mix of book royalties, articles, and a part-time copywriting gig.

The downside of self-employment is I never feel like I can truly be “off.” There’s always a potential story at my fingertips, and thereby a way to chip away at my looming debt, which hovers at a little over $50,000.

My local bingo hall is my happy place, somewhere I can go any night of the week and know I’ll leave with a smile on my face no matter what the outcome. It’s the one activity that lets me escape, well, me, where money becomes more magical and less weighty.

I live within walking distance of a bingo hall that offers games every evening, plus an additional 10:30 Tuesday night game, and Friday morning and Sunday afternoon games. Over the last four years, I’ve attended almost all of them, and win or lose, each was money well spent.

Entry costs $5, for the bare minimum number of two boards for 12 rounds, but I never play the minimum. You can buy extras for a dollar or two, depending on the value of the round; most offer $100 or $200 jackpots, with some rounds for larger amounts ranging from $1,000 to over $4,000, depending on how much has been bet. The first night I attended I spent around $30 and won $200, thus turning me into an instant convert. Now, I usually spend around $50 each time I go.

Lately, that’s every few months, but after the 2016 election I played bingo several times a week to help me forget about the news. I was a drag queen bingo regular in the East Village in the ’90s, but there we were competing for Queer as Folk DVD box sets and giant glasses filled with margaritas. This is serious, adult bingo, the kind where you’ll get shushed for talking too loudly.

The bingo hall is a place where I can forget about myself for two hours. For that small slice of time, I’m not a failed adult riddled with debt. I’m simply a middle-aged white lady with a dabber in her hand. All those money worries and existential angsty thoughts that rush to the surface whenever I have a free moment — Will be able to retire someday? Will I ever be a mom? What if [insert horrible catastrophe befalling anyone in my family]? — I can push to the back burner and focus solely on getting five stamps in a row, or a pyramid or four corners, or whatever variation of the game we’re playing at that particular moment.

I’d be lying if I said the prospect of winning doesn’t motivate me to settle in alongside women 30 and 40 years my senior, who come armed with special bingo bags that hold a rainbow array of dabbers and tape to fasten their boards together. Money, of course, is the main reason any of us lurk at the bingo hall. Another reason I stopped going to casinos is that the only games I like, slot machines, have the lowest odds. After reading that, I couldn’t quite bring myself to revel in their blinking lights and beckoning noises.

With bingo, I’ve never stopped to look up the odds (please don’t tell me if they’re bad). Instead, I let myself sink into a fantasy world where I fully believe that I just might walk away with a stack of cash. All that’s required of me is to stamp red or green or purple blobs of ink onto a piece of pre-printed paper. I love the sense of excitement that washes over me at the start of each new round — all those blanks squares, all those possible chances.

With bingo, I’ve never stopped to look up the odds. Instead, I let myself sink into a fantasy world where I fully believe that I just might walk away with a stack of cash.

When my boyfriend and I moved within 10 minutes of Atlantic City, I worried that the lure of the casinos would be impossible to resist. Yet one evening in a smoky local casino cured any romanticism I might have had. I don’t know how to play casino games like poker or craps, and I don’t care to. I don’t want to think too much when I’m hoping to catch a financial windfall, or for it to feel like work, but I do want my mind to be occupied.

Bingo fills that purpose perfectly. There’s no free time to stare dazedly at Twitter. I can’t slack off or I’ll miss a number being called. The avid players know to look up at the TV screens to see which number will be called next before it’s actually spoken. Bingo makes me feel like I’m an active participant who, with a combination of luck and alertness, has a chance of winning. Bingo is full of colorful markers, breathless anticipation, and quick reflexes, surrounded by people who are a little more relaxed than the average casino-goer. Regular players give advice to newcomers, call out happy birthday to each other, and root for their friends as much as themselves. What I’ve learned is that I don’t actually love gambling; I love bingo.

I allow myself to be fully immersed in the drama. I double and triple check my cards, mentally noting which ones are close to winning and which ones are duds. I rub the orange hair of the troll doll I bought on my first visit. I silently chant “I-18” or “G-57” until the combination echoes in my mind. There’s a ripple of energy that races around the room when someone is about to hit bingo, knowledge that is transmitted either through a small gasp passed as if playing an almost-silent game of telephone or a collective Spidey sense shared by the players.

The few times my good-luck tactics have actually “worked” and I’ve looked up at the screen to see my number about to be called, I’ve felt euphoric. It’s what I imagine winning a game show — my ultimate bucket list item — would be like. I don’t care whether it’s luck or chance or fate. In that moment, I’m not, for once, thinking about the money. My entire being is focused simply on hearing that magic letter and number spoken into the microphone by the person sitting behind that spinning wheel, at which point I can shoot my hand in the air and call out as loud as I can, “BINGO!” There are no other moments in my life where I get to literally yell out a victory.

That possibility is truly why I play bingo. For $50, I get to spend an afternoon or evening utterly caught up in the dramatic highs and lows of being three away, then two, then one. I know going in that I have just as much of a chance as anyone else in the room.

While the result may be just as predetermined and out of my control as playing the lottery, bingo feels more active, like if I pay close enough attention, I just might win. History has shown that I truly might; I’ve won four times, out of approximately 40 visits, totaling $1,350 (with one momentous Super Bowl payout of $1,000). I’ve spent around $2,000 by my estimation, so my total losses are $750.

Given those numbers, you might assume I’m just sinking myself deeper into debt, and technically, you’d be right. But I’m purchasing much more than that potential chance to become a champion. I’m buying myself a temporary shortcut to mental health, a reprieve from that constant inner refrain that loops from you’ll never be good enough to why even bother trying. Unlike casinos, I never sense that the people around me are gambling with their rent money in a last-ditch effort to get rich. We’re all playing bingo, with an emphasis on play. With bingo, I don’t have to be smart or ambitious. I’m not being measured by my net worth, or anything else.

In lottery player parlance, I’m a dreamer, someone who sees their gambling as the “chance to fantasize about winning money.” A bingo victory feels likely enough that it makes sense to try, while knowing that what I could potentially win during any given round, while exciting, wouldn’t change my life. At best, I’d pay down a small fraction of my debt. Competing for a welcome but not mind-boggling amount of money, though, feels more sane and satisfying than wondering if I’ll win the next Mega Millions.

Plus, bingo is more communal, and more fun; in that room, I’m a dreamer surrounded by dreamers. I know that someone in the same room as me will be walking away the big winner. I can say congratulations, and see the look on their face when they win — and know it might be me next time.

Rachel Kramer Bussel writes about sex, dating, books, culture, and herself. She is the editor of over 60 anthologies, including the Cleis Press Best Women’s Erotica of the Year series.

The right way to play Monopoly
$2 million book deals about the Trump administration are anything but brave
Winners and losers from the Big Tech antitrust hearing
Whole Foods employees are worried about new owner Amazon — so they’re trying to unionize
Martha McSally’s bailout proposal for the travel industry, explained
Consider the vulture