The best $59 I ever spent: A rice cooker that connected me to my roots 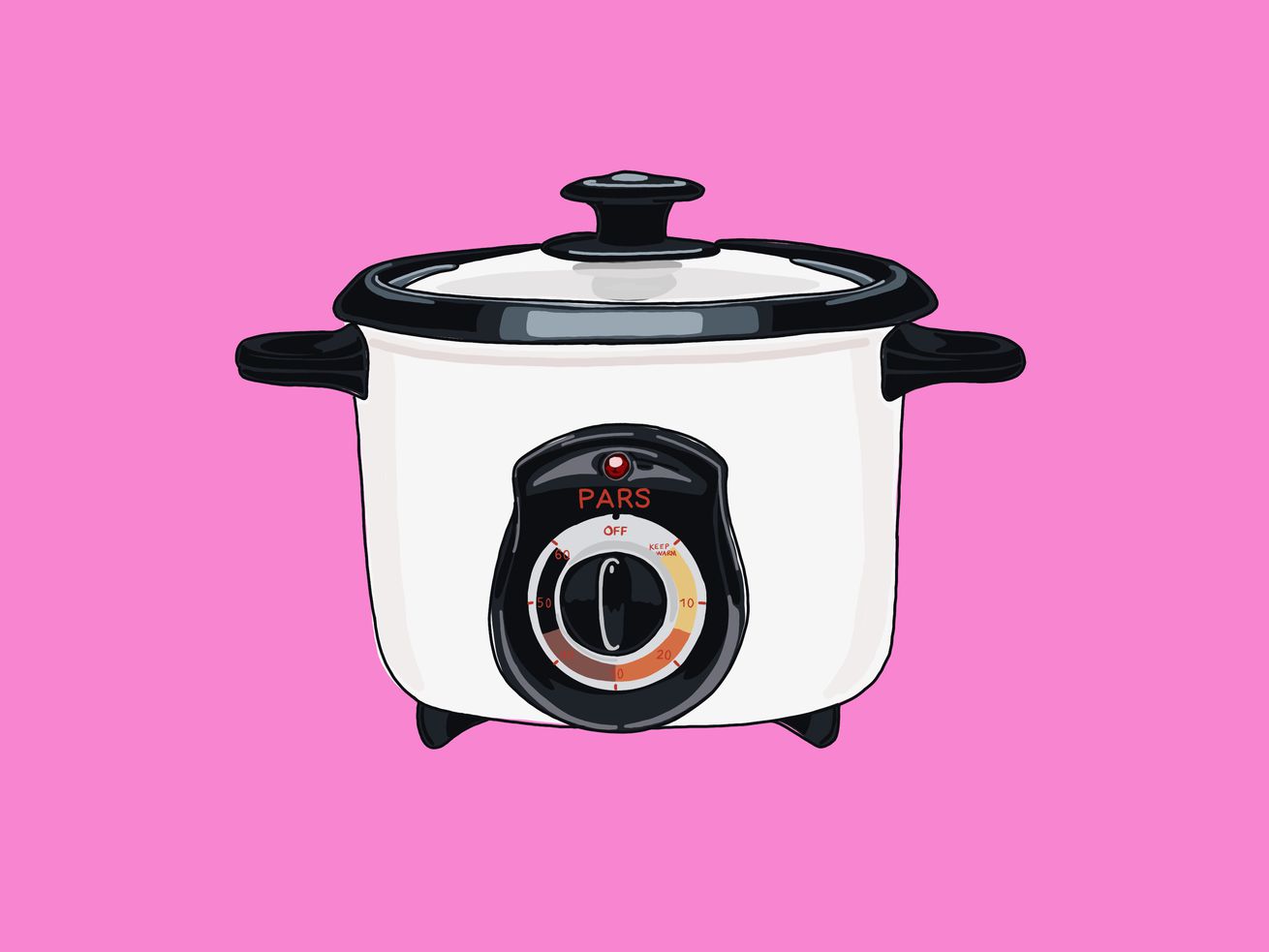 I’ve never felt Persian enough. My hometown in Southern California, which holds one of the largest populations of Iranians outside of Iran, is only 30 miles northwest of Persian Square, or “Tehrangeles,” a subsect of West Los Angeles concentrated with Iranian markets and storefronts. Still, the surrounding area was largely white. As hard as my parents tried to immerse me in the culture they knew best, I didn’t care much about embracing my roots as an adolescent. And I’m paying the price for it today.

My Farsi is terrible. I’ve never been to Iran. I don’t know much about the pre-revolution Iran my parents lived in before they defected to the United States. And, above all, I can’t cook rice.

Maybe I shouldn’t say “can’t.” I just can’t cook it well. Rice is a fickle grain, and it doesn’t matter if it’s berenj imported from Mazandaran or brown rice from the supermarket. It all turns out the same when I’m dealing with it: the bottom of the pot scorched while the rest is mushy, somehow both burned and undercooked.

It’s ironic that I can’t make rice because I cook and bake a lot. I’ve been known to dry-brine individual Cornish hens for 48 hours, or spend weeks planning and preparing a holiday dinner for 10 by myself. Even when I get the munchies, I’ll slice russet potatoes into sticks and soak them in water and pat them dry and fry them twice instead of ordering from the bodega. I like to think I can make anything better from scratch.

The correlation between my identity and cooking rice would seem arbitrary if rice weren’t the backbone of Persian cuisine. But it’s served with everything — either on its own, or on the side, ba tadig. Whenever a recipe calls for it, I’ll substitute it for the vastly inferior microwavable variety. Still, Persian rice, or polo, can’t be replicated in the microwave (if someone has managed to passably do so, please let me know). Polo’s pillowy texture is achieved through multiple steps: rinsing the basmati rice before and after boiling, layering lavash or oil for tadig, sprinkling saffron powder on top, and securing the lid with a damkesh. This is all before flipping the pot upside down to reveal a shell of crispy tadig enveloping the fluffy interior of rice. Polo is both a side dish and the centerpiece. It’s the common denominator that brings food and family together.

Some of my earliest memories are of my mom’s mom, my madar-joon, preparing a feast for our immediate and extended family. It wasn’t uncommon for her to cook for 100 people when only 40 or 50 were expected. The smell of white fish fried in oil clung to the air as strongly as the Yves St. Laurent perfume she’d buy on sale from Marshalls. I’ve always been fascinated with cooking, and I lingered by the kitchen while the other matriarchs chopped and sliced and seared and simmered ingredients in an assembly line. I wasn’t allowed to help as a boy — none of the men were. So instead I watched them from a distance, memorizing the way they held their knives to dice onions or the exact time to add the minced greens for sabzi polo. It was like they were solving jigsaw puzzles, putting different-sized pieces together to make a finished product.

It was like they were solving jigsaw puzzles, putting different-sized pieces together to make a finished product

Besides my madar-joon, I grew up without many role models to admire. I knew early in life that I was gay, and perhaps that’s why I pushed this culture away before it could push me. When I finally came out to my parents, with whom I often clashed, I wasn’t surprised by their reaction. I wasn’t so much ostracized as I was constantly chided for my shortcomings. I was “too femme,” “not masculine enough,” or “too Americanized.”

None of these epithets were true, especially the last one. As hard as I tried, I struggled to find my footing as an Iranian American living in a post-9/11 world. Straddling two worlds becomes exhausting — pointless, even — when you can’t find your balance. Coming of age in separate environments that both invalidate your existence is demoralizing, and I was left without a core to support myself.

I’ve still made the necessary family appearances in my adult life. I returned home for Iranian holidays or weddings or birthday parties begrudgingly but without question. Even when I moved to New York City two years ago, I made plans to fly home for Nowruz — the Persian New Year — the following year. Then the first Covid-19 lockdown went into effect two weeks before my flight.

I didn’t make a big deal of it at first. Like a lot of people, I naïvely assumed life would return to normal in a month or so. But it didn’t. When one month became six, I lost my full-time job and most of my freelance work. Unable to leave the house, my passion for cooking took on a life of its own. I made cakes and bread and stews and tarts and Wellingtons and Linzers to pass the time. When my usual recipes became stale and the loneliness that weighed on me grew heavier with each day in isolation, I decided to begin experimenting with Persian cooking. It felt like the right time. And my first project would be polo ba tadig.

Nearly all traditional Persian recipes involve lengthy steps. Khoresh, a kind of Persian stew, is notoriously time-consuming. The ingredients and spices need to simmer for hours to break down and develop flavor. The technique is similar to an English stew or bœuf bourguignon, which are also labor-intensive. However, neither of those are plated with polo ba tahdig, and serving khoresh without polo is sacrilegious. That would be like serving bolognese without pasta. Despite my unlimited free time to test and perfect polo to my madar-joon’s standards, I realized I needed a shortcut. So I bought a rice cooker.

I remember my madar-joon sometimes using a Persian rice cooker to cook for smaller groups. Unlike other rice cookers, Persian ones regulate temperature to produce crunchy tadig without burning the rice. There weren’t any Persian markets near me, nor are these rice cookers easily found online. I eventually found one directly from the manufacturer’s website. I bought a Pars 4-cup cooker for $58.99, thinking it was the same size as my madar-joon’s. When it arrived, it looked about half as big.

Instead of exchanging it for a larger one, I decided that it was probably smarter to start small. I bought a few bags of basmati rice from the supermarket, enough for four or five batches of polo and tadig. I put on my apron like a lab coat and prepared for a long night.

I used what looked like the easiest recipe online, which I studied so intensely that I memorized it before I began cooking. I rinsed and re-rinsed the berenj to remove the starch. I boiled and rinsed it again before laying the oil for tadig. I used a yogurt and turmeric (to substitute saffron) mix for the tadig for a softer brittle, as recommended by the recipe. And I used an old dish towel as a damkesh. Everything was going accordingly, but the real test was flipping the pot onto a plate at the end. I would only be pleased if the tadig released easily, didn’t break, and wasn’t burned. It was literally a make-or-break moment.

I held my breath as I flipped it onto the plate using oven mitts. I lifted the pot to reveal a flawless dome of tadig with an even deep-orange color. As I cut into it like a cake, plumes of steam billowed from the fluffy polo. I got it perfect on the first try. And I cried.

This successful polo attempt roused me to recreate my favorite recipes, like fesenjoon and tachin. I traveled to Syosset and Great Neck, which are densely populated with Iranian immigrants, to find the ingredients I needed. The markets overwhelmed me with gems from my childhood: the gaz my dad used to eat that clung to his molars, or the brand of lavashak aloo that made my mom’s face scrunch from sourness. I found pistachios imported from Kerman, and rosewater from Isfahan. I asked a shop clerk, in my dustiest Farsi, the prices per pound or about the saffron guarded beneath glass. As I was checking out, I noticed a row of Pars Rice Cookers in several sizes behind the register, including the one my madar-joon used. I knew I’d be back soon to buy the bigger one.

I may not be able to read the Persian alphabet or know much about my family’s history, but I can tell you which khoresh and gusht is served on what holiday, or the correct rice-to-yogurt-to-saffron ratio for tachin. Cooking isn’t just a pastime for me — it’s integral to my character. I used to feel that my failure to make good polo further invalidated my already broken “Persian-ness” so I avoided it altogether. The rice cooker didn’t fully bridge the gap between my love of cooking and Persian identity. But they’re no longer mutually exclusive.

Arya Roshanian is a senior fiction editor for Action, Spectacle. His reporting, essays, and criticism are published in Variety, BOMB, Guernica, Catapult, and elsewhere. He is based in Brooklyn.