The best $85 I ever spent: Nursing bras that actually worked 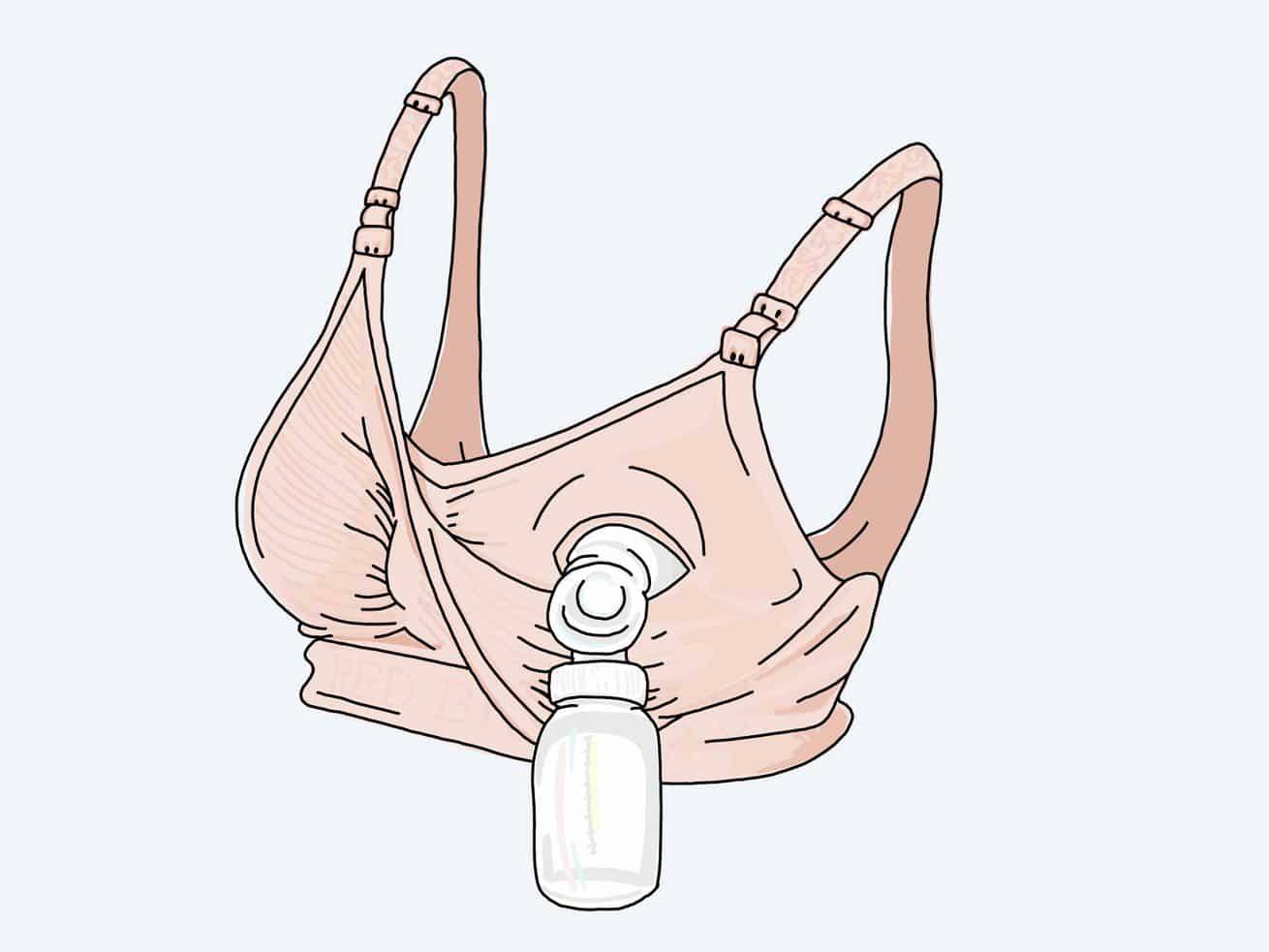 It was worth it — physically and mentally — to upgrade my crappy 3-pack of bras for something better.

Last April, I found myself suddenly a two-bodied organism. I had two spines and two hearts, and a river of information flowed between the segments that composed me. My larger body felt amoebic, porous, and indefinite; my smaller body was growing faster than I could imagine. It was the next evolution in a nine-month metamorphosis: My baby was finally on the outside, and though the umbilical cord that connected her to me like a small ripening fruit for 40 weeks had been severed, she was still latched to me 75 percent of the time.

In our new two-body existence, I was fused to the couch, the front of me curled like the letter C around this soft, vulnerable extension of myself that shouted directionlessly into the void. Is it possible to feel acutely aware of your body, yet bodiless? I couldn’t feel my borders; I didn’t feel like a person, yet I felt beyond human as the demands of the baby eclipsed my own in importance. “Can you bring me some water?” I would call to my husband, the third part of the equation, the one who could still operate independently in the world. My proxy to the outside, masking up to go get me a bagel so I could keep producing calories for the newborn.

When weeks later I started to get up and move around with some regularity, my body felt horrible. My C-section scar pulsed underneath a deflated balloon of skin; my neck and hips popped ominously; straightening my spine made me feel like I was going to fall over because my abs had completely slackened. Everything about my image in the mirror seemed to be melting. I desperately needed to move, but we were a couple months into stay-at-home orders, the idea of our beloved home city evaporating with the closure of every cafe, bar, and grungy neighborhood gym. I wanted to go “get my body back” (that weird bit of sexist, ageist rhetoric), but I had nowhere to go to do it. And I felt foolish for being concerned with it in the first place.

I had approached pregnancy like a temporary condition, fatalistically thinking, “This will soon be over.” I was managing a great deal of anxiety from a previous loss and refused to spend money on clothes because doing so felt too overtly like committing to hope. Instead, I attended doctor’s appointments in grease-stained leggings that had already been hand-me-downs during my first pregnancy, and stretched out all my band t-shirts. I willed my stretchy clothes to fit even more loosely. (RIP American Apparel raw-edged T-shirt dress, size large; I asked a lot of you, and you were terrifically inappropriate by the end of our time together.)

I wanted the time to elapse, wanted my transitional state to pass, while inside me my second body grew and thrived. Then February came, and March and April, and by the time the baby was born, we were in full lockdown mode. I emerged from the hospital with my wound and my infant and my new gelatinous body; the temporary part was over, but a second state of nebulous definition had begun, and I realized I had never counted on the baby actually being here.

My anxiety had kept me from the “treat yourself” mentality that triggers the algorithm — throughout the pregnancy, I browsed everything baby-related with a private browser so I wouldn’t be served any images of serene goddesses healthily functioning, their babies an accessory to a gorgeous life. So my own baby and I embarked on our breastfeeding journey, her in her size 1 diaper and hospital hat, and me in a low-quality nursing bra I’d purchased in a three-pack from Amazon the first time around. These bras were effective enough for their purposes, in a utilitarian kind of way. They kept one oozing appendage semi-contained when the other was being actively used, and in the rare moments when I didn’t have a boob out, they looked almost like a normal bra, if a normal bra was a nylon shopping bag with two large Ziplocs of soup in it.

In the rare moments when I didn’t have a boob out, they looked almost like a normal bra, if a normal bra was a nylon shopping bag with two large Ziplocs of soup in it

But when I emerged from the initial period of sleepless single-organism weeks and finally looked in the mirror to confront myself as a separate person once again, I realized that they weren’t great. They weren’t very supportive; they gave me uniboob; the material stank when it got wet, and it got wet a lot. Further, I was already several months into nursing — this wasn’t going to be as temporary as I thought. A year of life isn’t minor. And on top of everything else, I was going to have to go back to work, and I planned to eventually pump for the baby.

So I made what I considered to be an investment purchase —two well-reviewed nursing/pumping bras, one in nude and one in black, from a company founded and led by women (the only acceptable narrative for this purpose-driven, situational upgrade, as far as I was concerned). I submitted the order at 4:30 am one sleepless night with a coupon that brought the total down to $85, and five days later they were in my mailbox. I opened the package and pulled out the first bra; it looked tactical and medical at the same time. I swam my arms through the straps, smoothed my lumpy body into place, and clipped the bra closed.

The relief was immediate — there was structure, yet comfort; the shape of the body in the mirror, even clad in all these practical clips and flaps, was familiar. It looked different than it used to, but the thing in the reflection matched what I remembered a little bit more closely than it had in months. The feeling I got from this moment surprises me to think about even now. I don’t think I had realized how foreign I had felt, and how much that contributed to a lingering malaise. There was a whole lot of baggage there, in retrospect. I hadn’t allowed myself to acknowledge it because I felt guilty over even being concerned with something so frivolous. It was, after all, a double whammy of Bigger Things to Worry About — we were in a time of national crisis, and I had the personal higher calling of keeping another human being alive. Nevertheless, there it was, the stark truth: A small monetary exchange made me feel better than I had in months.

I’m not here to wax rhapsodic about these particular bras. They are great for me, and I still wear one of them every single day, months later, but two fancy nursing bras didn’t fix all my problems or make my body the same as it was before (though it’s worth saying that these bras are excellently designed).

The point I do want to make, though, is that since we are mortal creatures, everything in life is temporary, and that makes temporariness our permanent condition. So postponing things that would tangibly improve your life a little in the interest of saving money doesn’t really make sense. If we have the means, we should make ourselves and our beloveds as comfortable as we can; a sort of palliative care of the soul, if that’s not too grim. It does make me chuckle darkly to think that I’m fragile enough where one $85 purchase set me on a trajectory of feeling better about my exterior, but that’s life in a feminine body under capitalism. And while I sincerely dislike the get-it-girlfriend refrain of “you deserve this!” because it’s so often used to rob women, in this case, I’m so happy I made a purchase that made me feel improved, in a private, foundational kind of way, at a time when it mattered a lot.

Niina Pollari is a writer currently based in western North Carolina. Her next book, a poetry collection titled Path of Totality, is forthcoming from Soft Skull Press.

College football players are taking a stand against racism — and taking a big risk
Neither Susan Collins nor Lisa Murkowski will be voting to convict Trump
Purdue Pharma admits to crimes for its OxyContin marketing. But no one is going to prison.
Top 2020 candidates will be stuck in Washington because of the impeachment trial
“Lock her up!” In Phoenix, the signature Trump rally chant was especially ironic
How Obamacare helped millions who lost their jobs during Covid-19, in 3 charts