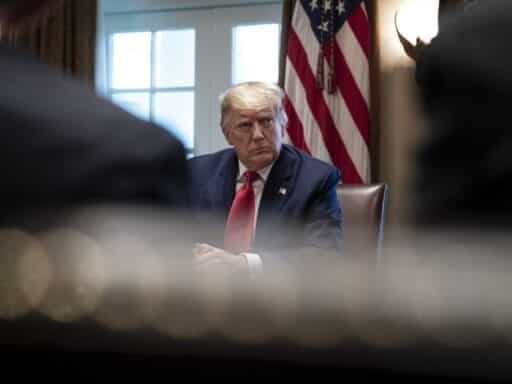 How Trump is hurting his own administration’s coronavirus response, explained by an expert.

President Donald Trump’s handling of the coronavirus outbreak in the United States has so far been a disaster.

He initially downplayed the severity of the outbreak at home, directly contradicting his own top health officials. He’s displayed a stunning lack of knowledge about basic things like how vaccines work and how quickly a coronavirus vaccine could realistically be developed and distributed to Americans. And he’s publicly spread misinformation about how deadly the disease, officially known as Covid-19, is.

All of that is extremely counterproductive to an effective crisis response, especially for dealing with something so complicated as the coronavirus. As of March 5, there are nearly 100,000 confirmed cases around the world, with more than 3,300 dead, mostly in China. In the US, there are more than 200 total cases — including at least 10 deaths in Washington and one death in California.

Yet Trump insists the problem is under control and that he’s doing a fantastic job.

Gallup just gave us the highest rating ever for the way we are handling the CoronaVirus situation. The April 2009-10 Swine Flu, where nearly 13,000 people died in the U.S., was poorly handled. Ask MSDNC & lightweight Washington failure @RonaldKlain, who the President was then?

I called up Jeremy Konyndyk, an expert in global outbreak preparedness at the Center for Global Development, to get a better sense of exactly how Trump’s actions have impacted the US response and how he could do better going forward.

As the director of the USAID’s Office of US Foreign Disaster Assistance during the Obama administration, Konyndyk managed the US’s humanitarian response to the 2014 Ebola outbreak in West Africa as well as other disasters including the 2015 Nepal earthquake and Typhoon Haiyan, which devastated the Philippines in 2013.

Konyndyk told me that although the public health officials involved in the administration’s response “are working as hard as they can” to deal with the outbreak, Trump’s failure to provide effective leadership means that “they’re not working as well as they can.”

“This isn’t a normal crisis,” Konyndyk said, “and atypical crises require real leadership from the top to solve.”

Our interview, lightly edited for length and clarity, is below.

What’s your main critique of President Trump’s response to the coronavirus outbreak?

That he’s made it primarily about himself, which is consistent with how he’s handled other major crises. There has been a high degree of chaos, and the focus has been much more on managing the public narrative than addressing the actual crisis itself.

Let’s unpack that. What should he be doing?

Second, it’s extremely important that you have some way of getting real-time feedback on whether your strategy is actually working. That’s the weakest point for this White House, as we saw with the Puerto Rico response and now with the current coronavirus response.

The reason for that weakness is that the president preemptively declares that whatever he is doing is a success. That makes it extraordinarily difficult for the people working on the response to then do anything but fall in line with that view.

Dr. Tony Fauci, [the director of the National Institute of Allergy and Infectious Diseases] who’s helping to lead the administration’s coronavirus response, told Politico recently that there’s a big temptation to tell the president what he wants to hear.

That’s certainly true. I’ve observed that in my own time in government. But the other half of what Fauci said is that “you got to walk the fine balance of making sure you continue to tell the truth.”

What Fauci is conveying there is that telling this president what he wants to hear and telling the truth are in tension with each other. That flows naturally from the fact that the president has decreed the response is a great success. But if in reality the response is anything less than a great success, it’s very, very hard for the government to acknowledge that and adjust accordingly.

Declaring victory early in the fight as Trump has, then, was not the right way to start.

No, that’s not a good place to start.

You also have an issue with the president’s general knowledge on issues related to the coronavirus.

Yeah, this gets to what it makes it so much more challenging when the response is under the leadership of someone like Trump. You want the person running the response to have an accurate understanding of what’s going on, and the president clearly doesn’t.

Obviously, it’s understandable if a president doesn’t know all the intricacies on things like this — that’s why he has advisers. But he’s two months into this crisis. To still be so ignorant of just basic things like that is extraordinary. That makes it immeasurably harder for his team to then direct a response in an effective way.

President Barack Obama wasn’t an expert on outbreaks, either. Did he get up to speed quickly during the 2014 Ebola response?

Absolutely, and I have an anecdote from that time to illustrate that.

I, along with others, got to meet President Obama for a few minutes in the Oval Office because of our Ebola work. The moment I walked in he started quizzing me about the Ebola burial teams, which was an important but fairly detailed element of the overall response. The fact that he was aware of those teams, and could ask me detailed questions about them, absolutely blew my mind.

You just don’t see that attention to detail with Trump. I really sympathize with the people who are working on this response within the government right now. Remember: it’s many of the same people — in fact it’s mostly the same people — that worked on Ebola and other crises. They’re all career people.

What that tells you is that the team isn’t a determining variable here. The president is.

The government is a massive machine, though. Sure, Trump isn’t well-read on these issues and doesn’t show any real inclination to learn about them. But why can’t the government just carry out an effective response despite the president’s ignorance?

Because this isn’t a normal crisis, and atypical crises require real leadership from the top to solve.

Think back to when Hurricane Harvey and Hurricane Irma hit the US in 2017. Both of those were standard-issue, major hurricane events. They hit states in the mainland United States that were well prepared and had strong disaster management agencies. The government response therefore was mostly fine — bureaucracies were set up for moments like that.

But when you have non-standard crises — like what Hurricane Maria did to Puerto Rico or this coronavirus outbreak — they require a president to get the government out of its comfort zone, to push it to do something it is not built to do. There’s really no one else in the government to do that.

Did you learn that lesson during the Ebola response?

Totally. There were all these different moving pieces that all sat in different parts of the federal government. They weren’t put together to facilitate a coherent response. It really took presidential leadership and the installation of a “czar” to finally bring order to that chaos. Ultimately, it was President Obama making very abundantly clear, to the entire federal bureaucracy, that this was a first-tier priority for him and that everyone needed to step up.

The other really important element to that was also not accepting business-as-usual rationales from the agencies.

There were many times during the Ebola response in 2014 when I, on behalf of my team, or others in the government, would be getting pressed by the White House to do something. We would say, “Look, we can’t do that,” or, “We’re working as hard as we can.” And the White House, to their credit, would come back with some variation of, “Well, that’s all well and good, but it’s not getting the job done.”

To recap so far, Trump’s failures so far are 1) he declared victory too early and 2) isn’t pushing his administration hard to develop a coordinated, effective response.

Is that it, or are there other metrics one should consider when evaluating Trump’s handling of the crisis?

President Trump’s insistence that the strategy of keeping the disease out of the country was succeeding really handicapped the rest of the response. Here’s why: It makes it harder for the government to plan for the moment the strategy stops working. That’s critical in this kind of situation.

The whole point of an overseas containment strategy is to buy you time. It delays the arrival of an outbreak in a country, but it cannot ultimately stop it. You’re not, or you shouldn’t be, hoping that that will be all that you need to do.

I don’t think the president understands that, and I don’t know how openly his team dissuades him of that view.

This makes sense to me, because most of what I feel like I’ve been hearing from the government and from Trump’s tweets is language about containment.

Exactly, there’s an almost exclusive focus on containment and very little discussion at all of domestic preparedness.

The first time a US official talked about a pivot to preparedness was when the Center for Disease Control’s Nancy Messonnier detailed last month how she’d started talking to her kids about the disruption they might face in their lives. And the president and his allies went ballistic. It’s a microcosm of the dynamic at play here, that even acknowledging the reality that this strategy might not fully work or might not be fully sufficient set the president off.

It’s very hard to acclimate the country to the idea of a coming pandemic and to begin triggering the tools that you need to be ready for that pandemic if you can’t even publicly acknowledge that possibility.

Is America’s ability to combat coronavirus a lost cause, or is there a way to rectify these major stumbles?

There are three ways to get back on track.

First, be honest about what we’re facing. The overseas containment phase is coming to a close. The disease is here and it is spreading. Travel bans, and overseas quarantines, and travel screening, and so on, are not going to offer us much protection anymore. The main driver of transmission now is going to be community transmission, which is likely already ongoing in numerous places around the country. That needs to be the central focus of the policy now.

Second, there needs to be actual transparency — actual candor — with the American people about what’s coming. That means not trying to argue, as the president repeatedly has, that this is under control and it’s about to wrap up and we’ll be fine in April. That’s not accurate. We need the administration to be real with us going forward.

With approximately 100,000 CoronaVirus cases worldwide, and 3,280 deaths, the United States, because of quick action on closing our borders, has, as of now, only 129 cases (40 Americans brought in) and 11 deaths. We are working very hard to keep these numbers as low as possible!

Any lies, half-truths, or exaggerations undermine trust, and trust is the engine of outbreak response. If there isn’t trust between the population and the people leading the outbreak response, it is very, very difficult to succeed.

Third, the president has to stop making it about himself and about the election, but I don’t know if he can do that. The irony here is that, the more he overtly does that, the worse it looks for him politically. The smartest move for him politically would be to put the politics aside, take this seriously, and let the chips fall where they may. In other words, to show real leadership. We haven’t seen that yet, though I hope he’s capable of it.