The biggest radioactive spill in US history never ended 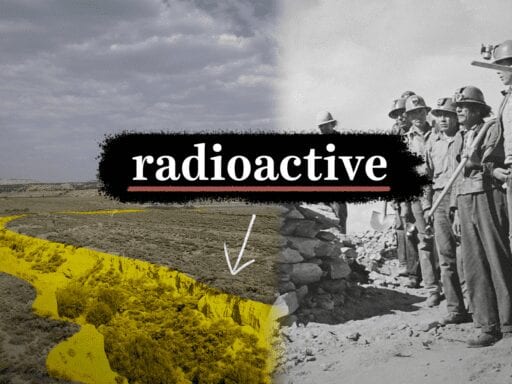 How the US poisoned Navajo Nation.

For decades, Navajo Nation was a primary source for the United States’ uranium stockpile during the nuclear arms race. It was home to more than 700 uranium mines, which provided jobs to Navajo residents. But the mining industry came with impending peril. Cases of lung cancer and other diseases began cropping up in a community that had previously had few of them. Land, air, and water was poisoned. And on July 16, 1979, the mining led to the biggest radioactive spill in US history.

Watch the video above to hear from residents in Church Rock, New Mexico, who’ve lived with the effects of the spill. More than 40 years later, the site still hasn’t been properly cleaned up, and residents continue to face illnesses, tainted water, and the loss of livestock. Today, with the Environmental Protection Agency’s new plan for cleanup, they’re worried it could wipe out their entire community.

If you want to learn more about mining in Navajo Nation, check out Doug Brugge, Esther Yazzie-Lewis, and Timothy Benally’s book on the subject. Or the feature documentary The Return of Navajo Boy by Groundswell Educational Films.

This is the eighth installment in Missing Chapter, where we revisit underreported and often overlooked moments of the past to give context to the present. Our first season covers stories of racial injustice, identity, and erasure. If you have an idea for a topic we should investigate in the series, send it via this form!