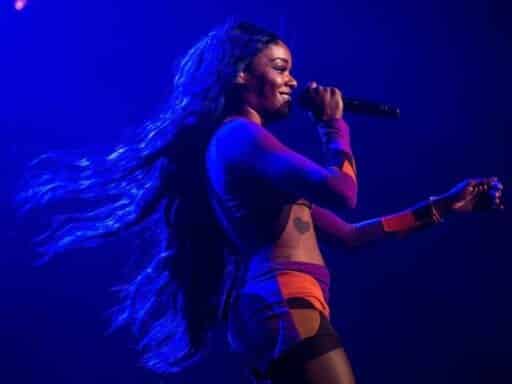 Here’s the background you need to understand the story.

The most inescapable and yet also somehow least consequential scandal on the internet this week is the one about rapper Azealia Banks sitting alone in Tesla CEO Elon Musk’s house for days, waiting for the pop star Grimes. There is very little hidden meaning to it; it’s basically a straightforward saga of rich people being weird.

But in our current news cycle of horrific reports of child sex abuse, Aretha Franklin’s death, and Omarosa’s publicity tour, the burning question of what’s going on with Azealia Banks and Elon Musk and Grimes is an unproblematic unicorn. And the entertainingly Mad Libs-y variety of the three names involved means the story has cast a wide net, from the gossip press to the business papers. (Which, if you think about it, are really just gossiping about money, no?) It made People, Vogue, and Business Insider. The New York Post is all over it, and so is New York magazine. No one can get enough of rich people being weird.

This explainer is your break from all the terrible things that are happening in the world. Sit back and learn the details of a bizarre tale of weird rich people being petty and weird and rich to each other. The important news will be waiting when you’re done.

Who is Azealia Banks?

Azealia Banks is a rapper whose feuds with other celebrities are legendary. Banks is not shy about calling out those who she believes are disrespecting her; she’s also not shy about leaning into homophobic and violent language to do so. She once got into a tiff with Sarah Palin over fake quotes that Palin had not actually said; at one point, Banks suggested it would do Palin good to be gang-raped. Banks’s Twitter account was deactivated in June after she insulted RuPaul’s Drag Race contestant Monét X Change. In July, her record label dropped her.

Banks’s history of dramatic grudges sometimes leads to glib suggestions that she consider medication, a pattern Banks reacts against strongly. “They joke and prod at you and say you need a doctor yet have no idea about the type of uncontrollable chaos that goes on inside your head,” she wrote on Facebook last year. “On top of arrogantly suggesting you need to be medicated, these people Have no idea how gnarly psych-drugs are.”

Who is Elon Musk?

Elon Musk is the founder and CEO of Tesla, the tech company/possible Ponzi scheme that makes electric cars for rich people, and the founder and CEO of SpaceX, which wants to colonize Mars. He periodically makes the news for announcing a tech scheme that sounds vaguely like one of Lex Luthor’s plans to defeat Superman. He recently made headlines for claiming that he could save the children who were trapped in a Thai cave with a miniature submarine (he did not save the children), and then calling one of his critics a “pedo guy” (the guy was not a pedo). Musk is currently in the news for sending Wall Street reeling by tweeting about taking Tesla private.

Musk has spent much of the past year fighting against attempts to unionize at the Tesla Factory. His first wife, Justine Musk, wrote a long and damning article about their marriage and divorce in 2010, in which she said that Musk had “rendered her disposable” over the course of their time together. Reportedly, Musk used to tell her that if she were his employee, he would fire her.

Banks and Musk’s paths unite through the person of Grimes, who has been collaborating with Banks and who announced at this year’s Met Gala that she and Musk are dating.

Grimes, real name Claire Boucher, is a pop star who prior to her relationship with Elon Musk was known mostly for being a punky, spacey weirdo who once sailed a houseboat down the Mississippi River. She used to have the descriptor “anti-imperialist” in her Twitter bio, which meant that hearts were broken when she announced during this year’s Met Gala that she’s dating Elon “Union Buster” Musk. (Grimes claimed on Twitter, incorrectly, that Musk “has never prevented [his employees] from unionizing.”)

There are certain overlaps between Musk’s and Grimes’s personal aesthetics, however, that make their coupledom feel more logical than it might seem. She loves space; he wants to colonize space. They met because they both tweeted the same joke punning on rococo and the thought experiment Roko’s basilisk. They are in many ways the same kind of pretentious nerd.

So what’s the scandal?

We know that Grimes and Banks were planning to collaborate on Banks’s long-delayed, notoriously troubled second album, a fact both confirmed separately in June. According to Banks, Grimes invited her to fly out to LA to stay at Musk’s place to put the finishing touches on their collaboration, which Banks duly did.

Here’s where it gets weird.

On Sunday, Banks began posting a now-deleted Instagram story, saying that she had been sitting alone in Musk’s house, waiting for Grimes, “for days.”

this a glitch in the simulation pic.twitter.com/YH3TLL6Rqz

Did Grimes actually invite Banks over and then ghost on her? Did Banks just show up out of the blue? No one knows!

But Banks continued to post about her stay on Instagram. Her thoughts were not flattering, and she may have lowkey accused Elon Musk of some investment fraud.

Azealia Banks exposing Elon Musk for tweeting while on Acid.. while she was waiting for Grimes at her home … whewwww lord pic.twitter.com/i9BXWWrLAD

That dark reference to Musk tweeting while on acid seems to refer to a Twitter thread Musk wrote at the beginning of August announcing his intention to take Tesla private “at $420.” “Funding secured,” he tweeted. It’s an open question whether Musk was being serious or whether he was making kind of a labored weed joke, but as Select All pointed out, if he was serious, his tweet could be seen as a manipulation of the marketplace. That would make it illegal. Musk wrote a blog post clarifying that no final decision had been made about Tesla’s future, but the Securities and Exchange Commission is reportedly investigating.

According to Banks, the investment issue was a major topic of concern at the Musk residence while she was there. “I saw him in the kitchen tucking his tail in between his legs scrounging for investors to cover his ass after that tweet,” she said in an interview with Business Insider, during which she also clarified that she was at Musk’s home from early on Friday through Sunday night. “He was stressed and red in the face.” She added, “He’s not cute at all in person.”

Over the course of her Instagram story, Banks went on to claim that Musk only took Grimes to the Met Gala so that he’d look good in front of his ex Amber Heard (plausible), that Musk’s wealth comes from colonialism (not entirely untrue), and that Musk is some kind of subhuman caveperson (false and weirdly eugenicist).

Grimes has yet to comment on the story. Musk, however, has maintained that he does not know Banks, telling Gizmodo that he “has never even met [Banks] or communicated with her in any way.” A spokesperson for Tesla added that Banks’s claims were “complete nonsense.”

So what is the truth?

We can be reasonably sure that Banks really was at Musk’s house over the weekend. Business Insider has “an independent secondary source” who confirmed she was there, and while Musk has continued to maintain that he has never met or interacted with Banks, he also has not denied that she stayed at one of his properties. We don’t know, however, that Musk was definitely in the same house Banks was in on the weekend in question.

As for the rest of the story — whether Banks really was invited over for a working weekend only to find her collaborator soothing her boyfriend over his decision to accidentally commit light investment fraud while tweeting on acid — at this point, it’s pretty much Banks’s word against Musk’s.

And when it comes to the question of whether to believe the woman who told Sarah Palin to get gang-raped over something Palin never said, or the guy who accused an innocent man of being a pedophile after the man pointed out that Musk’s miniature submarine did not, in fact, save a bunch of children — well, gentle reader, only your heart knows the truth on that one.

Apple’s malware problem is getting worse
America’s bad paid sick leave policy could make the coronavirus outbreak worse
A coronavirus consultant shares how she advises businesses on reopening
It’s official: women have been nominated for a record number of House seats
Trump says he’ll reopen the economy “based on a lot of facts and a lot of instincts”
Vox Sentences: Cuba not-so-libre