The bizarre abortion order just handed down by the Supreme Court, briefly explained 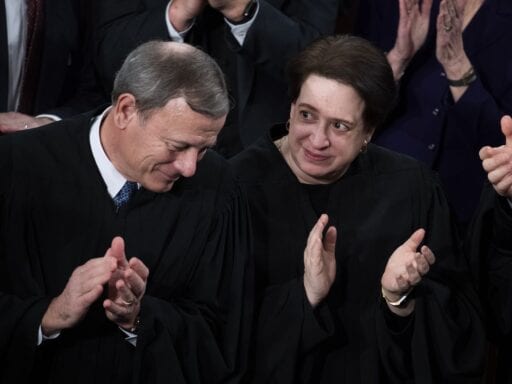 It’s hard not to read the Court’s order as a ploy to delay an abortion showdown until after the election.

The Supreme Court handed down an order Thursday night that doesn’t so much resolve a significant fight over abortion as delay a resolution — postponing it just long enough to ensure that the justices won’t need to weigh in until after the election.

The case, FDA v. American College of Obstetricians and Gynecologists, involves a dispute over whether abortion patients should have an easier time obtaining a pill used as part of a two-drug regimen to terminate a pregnancy. Mifepristone, the drug at the center of American College, causes pregnancy tissue and the lining of the uterus to break down and separate from the uterus itself. About a day or two after taking mifepristone, the patient takes a second drug, misoprostol, which causes uterine contractions and expels the uterus’s contents.

The Food and Drug Administration (FDA) approved the use of mifepristone for this purpose in 2000. Yet, while patents often take the drug at home, the FDA requires them to pick the drug up at a hospital, clinic, or medical office — it cannot be dispensed by a retail or mail-order pharmacy.

Under normal circumstances, this is a fairly minor burden on abortion patients’ ability to obtain an abortion. During a deadly pandemic, however, this requirement that patients receive mifepristone directly from their health provider is significantly more burdensome for a variety of reasons. Patients may be reluctant to travel to a clinic and risk infection, and many abortion providers are either closed or are operating at reduced capacity in order to limit the spread of Covid-19 (or, at least, they were at the time when the lower court order was handed down).

Accordingly, a lower federal court relaxed the FDA’s ordinary restrictions on who can dispense mifepristone until 30 days after the end of the public health emergency triggered by the pandemic.

As Justice Samuel Alito points out in a dissenting opinion in American College, this is exactly the sort of case where Chief Justice John Roberts — who typically opposes abortion rights but who also cast a surprising vote to block a Louisiana anti-abortion law last June — would ordinarily be expected to rule in favor of the Trump administration’s request, reinstating the FDA’s restrictions on mifepristone in the process.

In cases asking how public health officials should respond to the pandemic, Roberts has consistently emphasized that courts should defer to those officials’ judgment. In South Bay United Pentecostal Church v. Newsom (2020), for example, Roberts broke with his fellow conservatives, allowing a California public health order limiting the number of people who could gather in a place of worship to remain in effect.

“The precise question of when restrictions on particular social activities should be lifted during the pandemic is a dynamic and fact-intensive matter subject to reasonable disagreement,” Roberts wrote in his South Bay opinion. He added that “our Constitution principally entrusts ‘[t]he safety and the health of the people’ to the politically accountable officials of the States ‘to guard and protect.’”

A similar logic could easily be applied to the American College case, and it could be applied to this case without even having to get into the fraught legal and political issues surrounding the right to an abortion. A court ordered health officials at the FDA to change the rules regarding a particular drug, citing the pandemic as justification. But Roberts typically requires courts to defer to such officials in pandemic-related cases.

And yet, the Court doesn’t so much resolve the case as toss away a hot potato until after the election is over. Citing unspecified concerns that “a more comprehensive record would aid this Court’s review,” the Supreme Court’s American College order effectively punts the case back down to the lower court “to permit the District Court to promptly consider a motion by the Government to dissolve, modify, or stay the injunction, including on the ground that relevant circumstances have changed.”

The Supreme Court also orders the lower court to “rule within 40 days of receiving the Government’s submission.”

A majority of the Court, in other words, called for the lower court to take a do-over. And it gave the district court just enough time that, should this case reach the justices again, the election will be over (and Supreme Court nominee Amy Coney Barrett will likely be confirmed). Only Justice Clarence Thomas and Alito publicly revealed that they dissented from the Court’s order in American College, although it is possible that another justice dissented silently.

There’s no way to know with certainty why the Court took this highly unusual action, but there’s one cynical interpretation: At least some key members don’t want to wade into a giant abortion controversy in the middle of a Supreme Court justice confirmation fight and a presidential election.

We asked 2020 Democratic candidates 6 key questions on climate change
The moral cost of America’s meat-supply obsession
Netflix’s Dark isn’t a show you watch. It’s a show you solve.
400 people got a Domino’s tattoo for free pizza. Why do brands promote these body-altering stunts?
The House just voted to override Trump’s veto of a $740 billion defense bill
Democrats barely passed a bill to increase security at the US Capitol