The bizarre-even-by-Trump-standards past 72 hours, explained 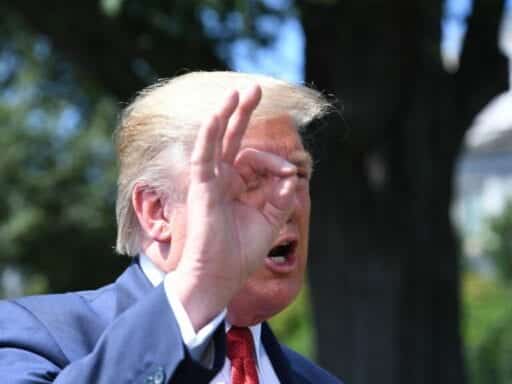 From an ill-fated attempt to purchase Greenland to God comparisons, the past three days have been a lot.

President Donald Trump repeatedly threatened to release ISIS fighters in Europe as a form of punishment for countries like Germany and France; said he’s strongly considering trying to change the Constitution by executive order (it doesn’t work that way); indicated he hasn’t ruled out trying to illegally serve more than two terms; rewrote history during comments about Russia’s expulsion from the G8 that framed the situation in the most pro-Kremlin manner possible; and, despite five draft deferments, joked about giving himself the Medal of Honor.

That was Wednesday. And that’s an incomplete list of all the outlandish stuff Trump said on that day alone.

Any of the aforementioned statements would’ve generated major scandals coming from the mouth of any other president. But given the week Trump has been having, they arguably didn’t even make the cut of the five most WTF things he’s said since his New Jersey vacation ended on Monday.

Even in the context of a presidency that has regularly veered into surreal territory, the 72-hour period from Monday through Wednesday stood out. From a silly, ill-fated attempt to purchase Greenland that turned into a diplomatic row to amplifying a conspiracy theorist who compared him with God, Trump seems to be out there more than ever before.

Here’s a chronological rundown of just some of the lowlights.

The president’s desire to purchase Greenland from Denmark — even though it isn’t for sale — started off humorously enough. Trump even managed to poke some fun at himself over the whole thing on Twitter on Monday.

I promise not to do this to Greenland! pic.twitter.com/03DdyVU6HA

But shortly after Trump posted that tweet, Danish Prime Minister Mette Frederiksen dismissed the idea of selling the resource-rich island to America as “absurd.” That seemed to wound Trump’s robust sense of pride, causing him to lash out.

Out of nowhere, Trump on Tuesday escalated things by announcing that in light of Frederiksen’s comments, he decided to cancel his planned state visit to Denmark — one he reportedly invited himself to in the first place.

Denmark is a very special country with incredible people, but based on Prime Minister Mette Frederiksen’s comments, that she would have no interest in discussing the purchase of Greenland, I will be postponing our meeting scheduled in two weeks for another time….

Sen. Chris Murphy (D-CT) noted that the chain of events was worthy of a Simpsons episode.

And yet there was more to come. Trump took things to another level on Wednesday, calling Frederiksen’s comments “nasty.”

“She shouldn’t treat the United States that way, by saying, ‘absurd.’ That’s not the right word to use, ‘absurd,’” Trump said, adding that he thinks he knows Denmark “well” because “I have many people from Denmark who live in the United States.”

Before Wednesday was over, Trump was attacking NATO in general and Denmark in particular for not spending as much as he wants them to on defense. What started as farce had turned into a diplomatic debacle.

Trump says he’s “the chosen one” and compares himself to the king of Israel. No, really.

In recent weeks, Trump has tried to score political points off Reps. Ilhan Omar (D-MN) and Rashida Tlaib’s (D-MI) criticisms of Israel in an extremely misleading manner by saying things like they “hate Israel and all Jewish people.”

Trump seems to think that in light of Omar and Tlaib, no American Jew should vote for a Democrat. And on Tuesday, he said so in a way that invoked the very “dual loyalties” trope Republicans spent so much time criticizing Omar over earlier this year.

“I think any Jewish people that vote for a Democrat — I think it shows either a total lack of knowledge or great disloyalty,” he said.

TRUMP: “I think any Jewish people that vote for a Democrat — I think it shows either a total lack of knowledge or great disloyalty.” pic.twitter.com/I2lqFYTgXq

The president’s accusation that the majority of American Jews are either dumb or traitorous did not go over well. But on Wednesday morning, he made it even worse by quoting commentary from far-right conspiracy theorist Wayne Allyn Root in which Root asserted that Jews in Israel regard Trump as something akin to “the King of Israel” or “the second coming of God.” (Jews do not in fact believe in the second coming of God.)

….like he’s the King of Israel. They love him like he is the second coming of God…But American Jews don’t know him or like him. They don’t even know what they’re doing or saying anymore. It makes no sense! But that’s OK, if he keeps doing what he’s doing, he’s good for…..

During his Wednesday afternoon media availability, Trump indicated that he’s taking Root’s comparison of him to divine figures more seriously than you might think. At one point he paused, looked toward the heavens, and said, “I am the chosen one.”

Trump seriously seems to think he was chosen by God pic.twitter.com/1iHsYJzHO6

Probably not “the last whopper” but quite a front page. pic.twitter.com/b7Q20Se0ck

Trump rounded out his Wednesday by posting another video featuring commentary from Root about his “Jews for Trump” movement and “Jexit,” the supposed exit of Jewish people from the Democratic Party. He also posted a tweet in which he described notorious anti-Semite Henry Ford as “legendary.”

The whole thing was a bizarre cluster of casual anti-Semitism and ridiculous self-aggrandizement.

Trump’s media availability happened before he departed for Louisville to deliver a speech to the 75th annual American Veterans National Convention and announce a plan to forgive disabled veterans’ student debt. Before he left, a reporter asked him a topical question about what his plan is to stop the scourge of veteran suicides.

Trump responded, oddly, by hyping a new drug he falsely described as a “stimulant” that’s produced by Johnson & Johnson.

“I guess it’s a form of a stimulant where if somebody is really in trouble from the standpoint of suicide, it can do something. It’s pretty well known. It just came out. It’s made, I believe, by Johnson & Johnson and we have calls in now to Johnson & Johnson,” he said. ‘We’ve been dealing with them for two months on buying a lot of it.”

Beyond parody — Trump says his solution to the epidemic of veteran suicides is some new “stimulant” produced by Johnson & Johnson that he’s instructed the government to buy in large quantities pic.twitter.com/mFMwG6hpXa

As Spin reports, Trump was referring to “a nasal spray called Spravato which was derived from ketamine, the horse tranquilizer preferred by ravers across the world.” And not only is there no reason to believe that Spravato is particularly effective at preventing suicides, but as this study from the Center for Public Integrity indicates, there are some major questions about it:

During several years of trials, six people who had been treated with the drug died, as opposed to none on placebos. Three of the deaths were suicides. The FDA said it was difficult to conclude that the deaths were caused by the drug. Still, noted one psychiatrist, “It’s not heading in the direction supporting protection from suicides.”

Data from the drug’s trials shows it to be only slightly better than placebos in its performance. “The benefit isn’t much,” said Julie Zito, professor emerita of pharmacy and psychiatry at the University of Maryland, who cast one of the two no votes on the FDA advisory committee that approved the drug.

There could be one reason Trump is suddenly touting Spravato as a possible magic drug to prevent veteran suicides. As Popular Information reports, one of the heirs to the Johnson & Johnson fortune is Woody Johnson. Woody Johnson and his wife are top Trump donors and recently gave $720,000 to his campaign.

That’s not all there was

The above list of Trump’s outlandishness this week is far from exhaustive. On Tuesday, for instance, Trump claimed on Twitter, without evidence, that Google “manipulated” as many as 16 million votes in the 2016 presidential election. The underlying study he referred to is deeply flawed, but that’s nowhere near as important to the president as creating the perception that he didn’t actually lose the 2016 popular vote. And during his speech on Wednesday — one in which he struggled to pronounce a number of words — Trump joked not only about giving himself a Medal of Honor but also about how he’s obliterated the line between campaigning and governing.

Trump jokes about obliterating the line between campaign rallies and official White House events. American taxpayer dollars paid for Trump’s trip to Kentucky, yet he’s using it to deliver a campaign speech. It’s not supposed to work that way. pic.twitter.com/MnYMH5mJel

The picture that emerges is one of a president whose thinking isn’t grounded in reality and is instead fixated on unimportant things like crowd sizes at his rallies and perceived slights. A Fox News poll showing him far behind his top Democratic challengers is evidence that Fox News is biased against him, not that he needs to make adjustments. The Danish PM rejecting his bid to purchase Greenland reflects disrespect toward him, not the reality that the island isn’t for sale. Headlines about a possible recession are the product of a media conspiracy, not his trade war and broader macroeconomic trends.

Some of it is laughable. Some of it — the anti-Semitic tropes, for example — is not. All of it is evidence that more than two and a half years in the role haven’t helped Trump settle into his job. In fact, if the past 72 hours are any indication, things in the White House are less settled than ever.

What is a snack, really?
How one woman is trying to end period stigma and the “tampon tax”
The state of the 2020 Democratic primary
The Great Recession was called a “mancession.” This one could be devastating for women.
Justice Sotomayor warns the Supreme Court is doing special favors for the Trump administration
Is abuse of power an impeachable offense?