The boldest and weakest labor platforms of the 2020 Democratic primary 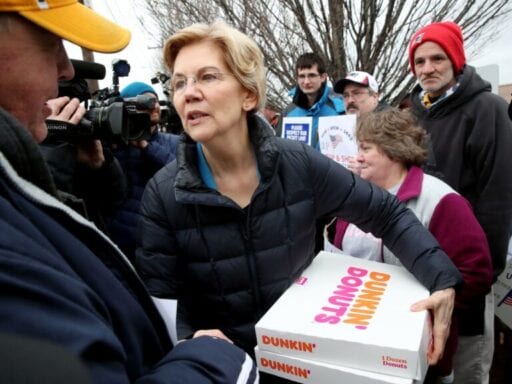 Here’s what Democrats have promised to do for workers.

Presidential candidates are going all out to win over working-class Americans as they prepare for the fifth Democratic debate.

And for the first time, most candidates are really paying attention to working women and the challenges they face in the workplace, such as lower pay and few accommodations for pregnant and breastfeeding women.

Sure, not every candidate is promising workers major reform. Some candidates are more interested in incremental changes. But even so, the 2020 Democratic primary election is shaping up to provide the most ambitious blueprint to overhaul US labor laws. And with public frustration toward billionaires and CEOs mounting, it seems like a smart campaign strategy.

“This is our moment to dream big,” Elizabeth Warren said during her campaign announcement event in Lawrence, Massachusetts, a location she picked because of its role as the birthplace of the US labor movement.

Reading the labor platforms for each of the 12 candidates who participated in the fourth Democratic primary debate this month, two groups emerged: the labor reformers and the labor supporters. The frontrunners fall into the first category — Warren, Joe Biden, Pete Buttigieg, Bernie Sanders, as well as Julián Castro and Beto O’Rourke, have all put out detailed proposals that would shift the balance of power from businesses to workers. Kamala Harris’s specifically focuses on teachers.

Amy Klobuchar and Andrew Yang are in the second group; they seem to see themselves more as allies to workers and labor unions, not bringing sweeping change. Tulsi Gabbard and Tom Steyer, meanwhile, don’t have much of a plan to offer workers at all.

Most of the reformers — Cory Booker, Buttigieg, Harris, Sanders Castro, and Warren —explicitly support the following legislation (additional candidates who support these are noted in parentheses), some of which have already passed the House of Representatives.

Biden moved into the labor reformers’ category after he recently released a detailed plan that would increase penalties for labor violations and hold company executives personally liable for interfering in union organizing. Employers who intentionally interfere with unionizing efforts could even face criminal charges. That’s a huge change from the status quo. Right now, employers face zero financial and criminal penalties when they illegally try to discourage workers from forming a labor union.

One major difference between Biden’s latest labor plan and other candidates in this category is that Biden doesn’t endorse a specific universal paid parental leave program or guaranteed paid sick days.

Booker’s labor platform is thin and somewhat vague, which is an argument for placing him in the “labor supporters” category. But his one signature plan is big enough to shift the balance of power in favor of workers in fundamental ways — the Worker Dividend Act he sponsored in the Senate.

The bill would curb how companies buy back their own stocks, forcing them to give workers a cut. The Worker Dividend Act would mandate that companies buying their own shares must also pay out to their own employees a sum equal to the lesser of either the total value of the buyback or 50 percent of all profits beyond $250 million.

As Vox’s Matthew Yglesias explains, the bill is “a critique of the overall operation of an economic system that people on the left have long argued is systematically broken and stacked against everyone but the very wealthiest Americans.”

Somewhat surprisingly, Buttigieg has one of the most comprehensive labor platforms, including more than just a wish list from labor unions. He wants to make sure domestic workers and farmworkers are covered by US labor laws, which closes a huge loophole that allows employers to exploit vulnerable workers. He promises paid parental leave, a $15 minimum hourly wage (indexed to wage growth), and to let Uber drivers and other gig workers unionize. Here are some other highlights:

Buttigieg also suggests a smart change to temporary visas for foreign workers. High-skilled and low-skilled workers in the US on H-1B or H-2B visas, for example, would no longer be tied to one employer under his proposal. That has been one of the biggest problems with the guest worker programs. Businesses that employ foreign workers end up with too much power over that workforce, making them more vulnerable to abuse and exploitation.

Castro just released a new labor platform that focuses on the most vulnerable workers in the US economy: farm workers and domestic workers. Castro says he drew inspiration for his plan from his grandmother, Victoria, who earned a living cleaning houses, cooking and babysitting. His proposal would not only grant basic labor protections to both groups of workers, it would also create a pathway to citizenship for undocumented farm workers.

Here are other highlights:

Harris has focused her labor platform on working women and public schoolteachers, in particular. She supports a $15 minimum wage and wants to create stricter penalties for companies that commit wage theft.

Here are more details from her plan to boost wages for teachers:

All of this would cost about $315 billion, her campaign says, and would be paid for through an estate tax.

Another, non-teacher highlight in her plan:

O’Rourke has a massive labor platform that carefully lays out his plan to boost union membership rates.

Sanders has done perhaps more than any candidate to move Democrats toward more progressive labor policies. He sponsored the Raise the Wage Act and came out with a dramatic labor platform last month.

As Vox’s Tara Golshan explains, rebuilding union membership is central to Sanders’ platform. His plan outlines a series of executive orders and bills that aim to strengthen union membership, punish employers who engage in union-busting practices, and raise wages and benefits.

Here’s what Sanders is proposing to do, without Congress:

Much of Sanders’s plan, like many other candidates’ plans, would require legislation. That includes:

Sanders just released another big plan that would give employees an ownership stake in the companies where they work. It would also require corporations to reserve 45 percent of their board seats for employees. Read Tara Golshan’s explainer here.

So far, Warren has one of the most ambitious labor platforms of all the 2020 candidates. She recently released her plan to overhaul US labor laws, which includes a long list of promises to close every loophole and fix every broken policy that has kept working families from getting ahead in the post-recession economy. Oh, and she wants to give workers new rights too, such as the right for gig workers to unionize.

In many ways, Warren’s ideas mirror some of Sen. Bernie Sanders’s proposals, like making it easier for workers to go on strike and letting unions bargain on behalf of an entire industry. But Warren also focuses on the minutiae — the little tweaks and changes that could make a real difference for working Americans.

Here are the highlights:

Gabbard hasn’t said much about labor issues in her campaign. I could only find two specific labor policies she supports: the Raise the Wage Act, which would raise the federal minimum wage to $15 an hour and the Paycheck Fairness Act, which strengthens remedies for workers who have experienced pay discrimination.

Klobuchar has a fairly vague labor platform. Here’s what is says about workers’ rights on her campaign website:

As the granddaughter of an iron ore miner and the daughter of a union teacher and a union newspaperman, Amy will bring one clear but simple guide to the White House: When unions are strong, our country is strong. As President, she’ll stand up against attempts to weaken our unions. That means achieving real labor law reform, ensuring free and fair union elections, protecting collective bargaining rights, rolling back Right to Work laws, and making it easier — and not harder — for workers to join unions.

In June, Klobuchar did release a list of executive actions she would take in her first 100 days as president, which includes many that would make it easier for workers to join labor unions. For example:

Billionaire Tom Steyer, along with Gabbard, has the weakest labor platform of all the candidates. It’s not even appropriate to say he has much of a plan. All we know about Steyer is that he wants to raise the federal minimum wage to $15 an hour and has made a vague promise to strengthen labor unions. He also says he supports paid family leave and affordable child care for working parents, but doesn’t give any details about how that would work.

Yang is enthusiastic about equal pay and paid time off but makes no mention of labor unions in his platform. Here are the highlights:

Emma Chamberlain and the business of being relatable
America has half a million fewer jobs than we thought
Trump revokes John Brennan’s security clearance for “erratic” behavior
Why police encouraged a teenager with a gun to patrol Kenosha’s streets
A reporter confronted Sarah Sanders about Trump’s habit of insulting black people on Twitter
To Trump, Europe is “as bad as China” on trade