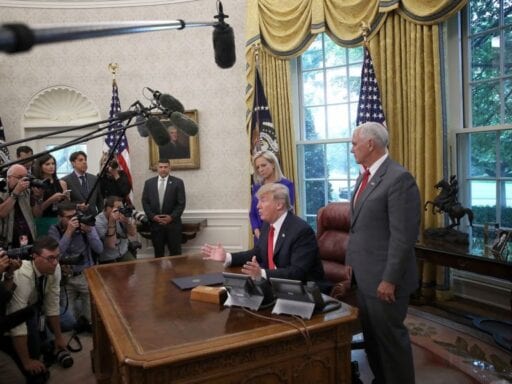 Faced with a problem Mitch McConnell can’t solve for him, Trump is flailing.

Donald Trump has largely skated by as president, deferring to the policy consensus in Republican Party circles. He’s served as a rubber-stamp signatory of tax legislation he wasn’t involved in crafting and judicial nominations in which he had little say.

But sometimes things happen — like a surge of families with children arriving at the border to press asylum claims — that require leadership in the executive branch and don’t have obvious solutions.

Trump’s response to the crisis at the US-Mexico border — where toddlers are in internment camps and older kids are in tent cities at frightening expense while children sob, health deteriorates, and the long-term damage of toxic stress accumulates — reminds us that he does not know anything about public policy, diplomacy, constitutional law, or legislative strategy.

So you get instead what he’s delivered over the past two weeks — aggressive hostage-taking, lying, trolling, chaos, dissembling, and cruelty — none of which is going to advance Trump’s legislative goals or address the underlying issue of the northward flow of asylum seekers. Even the executive order he signed on Wednesday raises more questions than it will probably solve.

All presidents are tested now and again, and Trump is failing massively. It’s not quite the first time, and it certainly won’t be the last. Being president of the United States is a difficult job, and Donald Trump has no idea how to do it.

The origins of this crisis are in Central America

The fundamental reality of the situation that Trump has no idea how to grapple with is that the families showing up at the border aren’t faking it.

Whether or not one deems the asylum claims being made as meeting the formal legal bar, it should be obvious that nobody takes their children on the perilous route through Mexico with dim prospects of an ultimately successful asylum application without being seriously distressed back in their home country. By the same token, it’s not a coincidence that the family migrants are coming specifically from Honduras, Guatemala, and El Salvador rather than the more stable countries to the north or south of that triad.

It’s not obvious that there was actually anything especially terrible about the status quo as it existed in 2016 — a lot of people came, they were typically released into the interior pending asylum hearings, most claims were rejected, and a certain number of people skipped their appointed court dates. In the Trump administration’s mind, the fact that crossings are occurring at a much higher rate in 2018 than they were in 2017 is a big problem, but the reality is that it’s simply a return to the level we were living with before Inauguration Day.

But while reasonable people can disagree about which problems are important, there’s simply no denying that the origin of this problem is in Central America. If Trump wants to make solving the problem a major priority, he needs to make Central America a major policy priority. Instead, he’s picked a secretary of state with no experience in the region, made himself politically toxic by calling El Salvador a “shithole country,” embroiled the country in pointless fights with Mexico over NAFTA and a border wall, repeatedly threatened to end aid to Honduras for no reason, and decided not to show up at the Summit of the Americas.

Drastically improving living conditions in the Northern Triangle would, obviously, be difficult. But Trump isn’t even trying. Meanwhile, he exacerbates his problems with the fact that he can’t even remotely get his story straight on what he’s even trying to accomplish.

Trump has no idea how to legislate

After Chief of Staff John Kelly and Attorney General Jeff Sessions had both spent a considerable amount of time teasing a new policy of criminal prosecutions for asylum seekers as a deliberate means of separating parents from their children that would create a powerful deterrent, the White House’s communications strategy broke down immediately when the issue became controversial.

Homeland Security Secretary Kirstjen Nielsen repeatedly denied that there was any new policy at all, Health and Human Services Secretary Alex Azar was nowhere to be seen even though his agency oversaw the children in detention, and Trump himself kept insisting that the new policy was somehow forced on him by some mysterious law that Democrats were allegedly responsible for. The one thing everyone could agree on was that the only possible solution was for Democrats to come to the table and agree to a broad series of sweeping changes to American immigration policy. Children were being held as literal hostages in a legislative negotiating strategy.

Not surprisingly, this didn’t work. On Wednesday, the administration admitted it had been lying all along and prepared to back away from family separation.

This combination of bluffing and hostage-taking would be a remarkable approach under any circumstances, but it’s particularly bizarre because Trump has repeatedly tried and failed to make this work. First he did it with the Affordable Care Act, where he spent months deliberately sabotaging the law and raising insurance premiums in the futile hope that this would bring Democrats to the table. He did it again with the Deferred Action for Childhood Arrivals program, canceling it and then immediately labeling the cancellation regrettable but demanding legislative concessions in exchange for a fix.

But even in its new form, Trump is still going to shift resources away from prosecuting criminals and toward prosecuting people — babies and all — for misdemeanor illegal entry violations.

Before this policy roughly 90% of prosecutions in McAllen federal court were of detained immigrants with criminal records. Since the new policy it’s flipped!

90% of those being prosecuted have no record and are facing misdemeanor charges for first time entry.

This may succeed in extricating Trump from the public relations disaster he made for himself, but nothing about this is going to induce Democrats to want to make a deal with him. If anything, the fact that once again his administration has been caught lying about significant public policy issues confirms the suspicion that he’s not a negotiating partner one can work with in good faith.

Meanwhile, the new approach violates earlier court orders and will be the subject of immediate legal challenges that will likely strike it down. Trump, in other words, isn’t fixing anything. He’s just continuing to flail.

So far in his 500 days in office, Trump has benefited from a fairly benign set of objective circumstances. He inherited a strengthening economy from Barack Obama and made a reasonable selection to head up the Federal Reserve.

His tenure has been marked by an extraordinary level of drama, but on some level, relatively little has actually happened in reality. But when things have happened, Trump has been unequal to the task of handling them. Last year’s hurricane season created a catastrophe. The return of Central American asylum seekers to their pre-Trump level immediately devolved into a humanitarian crisis. America’s relationships with its traditional allies are in tatters for no real reason. China is relaxing its enforcement of sanctions on North Korea, and Iran is opening a new nuclear facility.

And even though Trump is remarkably skilled at taking advantage of the news cycle’s tendency to move on, reality is less forgiving. Another hurricane season is coming. None of Trump’s border antics are going to stop people from coming north. Some trouble or another — whether in the realm of the economy or foreign policy — is essentially inevitable. And when the trouble comes, America will be facing it isolated and discredited, led by a team with no credibility or integrity, headed up by a man who can’t be bothered to put in a moment’s thought or hard work on even the topics he proclaims himself to be focused on.

Live results for the August 4 primaries
He fled Honduras, and its gangs, for safety in the US. After his death, who was to blame?
Mission creep a way of life in Western Pacific as sailors struggle with constant demands
Odd Job: This teen bought a bunch of vending machines. Now he makes six figures.
The 2020 Grammys’ sexual harassment and corruption controversy, explained
“This one is scarier”: Obama-era officials say current economic crisis is fundamentally different fr...