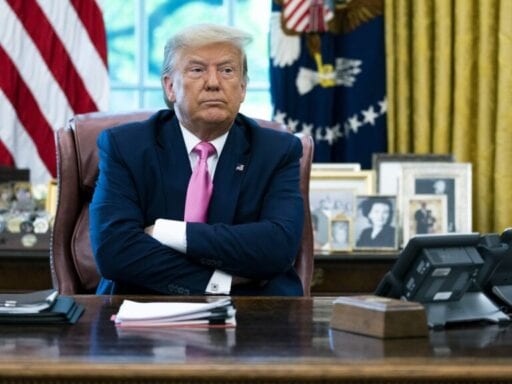 Share
Loading...
President Donald Trump talks to reporters while hosting Republican congressional leaders and members of his cabinet in the Oval Office on July 20 in Washington, DC. | Doug Mills-Pool/Getty Images

It’s a direct attack on the 14th Amendment.

The 14th Amendment to the Constitution provides that “representatives shall be apportioned among the several states according to their respective numbers, counting the whole number of persons in each state, excluding Indians not taxed.”

Nevertheless, on Tuesday, President Trump released an extraordinary memorandum suggesting that he gets to decide who counts as a “person” — and that undocumented immigrants do not qualify.

The memo concerns who should be counted when representatives are allocated to states following the 2020 census. Trump claims that “for the purpose of the reapportionment of Representatives following the 2020 census, it is the policy of the United States to exclude from the apportionment base aliens who are not in a lawful immigration status.” Thus, if Trump’s view were to prevail — a view that is at odds with the explicit text of the Constitution — undocumented immigrants would not be counted.

The implications of this unconstitutional policy are significant. An estimated 10.6 million undocumented immigrants live in the United States, but they are not distributed evenly among the states. Nearly 20 percent live in California. If Trump succeeds in effectively voiding a provision of the 14th Amendment, the nation’s largest blue state could potentially lose as many as three House seats.

Trump cites a handful of sources to justify his attempt to neutralize a constitutional requirement, including a federal statute providing that “the President shall transmit to the Congress a statement showing the whole number of persons in each State” after the census is completed, and a Supreme Court decision indicating that this statute gives the president some discretionary authority over how the census is conducted.

Citing the Supreme Court’s decision in Franklin v. Massachusetts (1992), Trump’s memorandum argues that “Congress has provided that it is ‘the President’s personal transmittal of the report to Congress’ that ‘settles the apportionment’ of Representatives among the States, and the President’s discretion to settle the apportionment is more than ‘ceremonial or ministerial’ and is essential ‘to the integrity of the process.’”

Trump is correct that Franklin reads federal law to give the president some authority over how the census is conducted. The president’s “duties” with respect to the census, according to Franklin, “are not merely ceremonial or ministerial.” Instead, the president may exercise “his accustomed supervisory powers over his executive officers” who conduct the census.

But the fact that Trump has some discretionary authority over census officials does not mean that he is free to violate the Constitution. Even if federal law did give Trump the power to ignore the 14th Amendment, that law would be unconstitutional.

Nevertheless, without citing any legal authority whatsoever, Trump’s memorandum claims that he should be allowed to determine what the 14th Amendment means.

“Although the Constitution requires the ‘persons in each State, excluding Indians not taxed,’ to be enumerated in the census,” Trump claims, “that requirement has never been understood to include in the apportionment base every individual physically present within a State’s boundaries at the time of the census.”

As Trump correctly notes, there are many people who may be present in the United States — tourists visiting from other nations, foreign diplomats, businesspeople, for example — who are not counted in the decennial census. “The term “persons in each State” has been interpreted to mean that only the ‘inhabitants’ of each State should be included,” Trump argues, and “determining which persons should be considered ‘inhabitants’ for the purpose of apportionment requires the exercise of judgment.”

As Aaron Reichlin-Melnick, policy counsel with the American Immigration Council, told me, “the average undocumented immigrant has been present in the United States for more than 15 years, according to Pew Research.” It is, to say the least, an unusual reading of the word “inhabitant” to suggest that someone who has resided so long in one place is akin to a tourist.

The Constitution itself does not consider immigration status when determining who counts as a “person” for purposes of the 14th Amendment. According to Reichlin-Melnick, “the Supreme Court has made it clear that the term ‘persons’ in the 14th Amendment is not limited by citizenship status” for more than a century.

But these racist policies did not become law until years after the 14th Amendment was ratified. And if Trump actually had the power to determine who counts as a person under the amendment, the implications of that power would be breathtaking. By this logic, Trump could potentially decree that younger voters, or Democrats, or anyone who has previously attended an Obama rally is not a “person” for purposes of allocating House representation.

After all, there’s as much language in the Constitution supporting the proposition that Obama supporters are not “persons” as there is language suggesting that undocumented immigrants do not count.

The Ukraine scandal makes a stronger case for impeachment than the Mueller probe did
The NBA might be returning this summer — in Disney World
Ilhan Omar’s tweet revealed core truths about anti-Semitism in America
Twitter’s top policy exec said there’s “no doubt” that some social media content contributes to radi...
Vox Sentences: Syria’s final push
Manafort trial jury ends first day of deliberations with no verdict