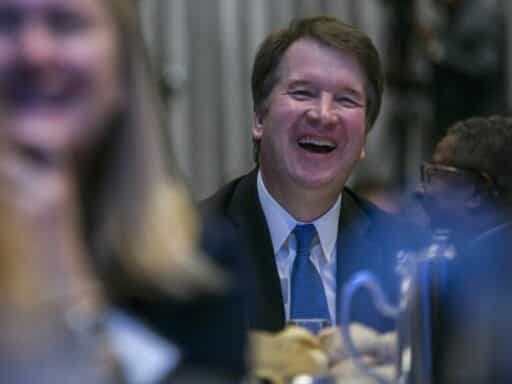 Share
Loading...
Supreme Court Justice Brett Kavanaugh laughs at an event hosted by the Economic Club of Washington, D.C. at the Capitol Hilton on May 9, 2019 in Washington, DC. | Zach Gibson/Getty Images

A developmental psychologist explains “the brutal humor of masculinity.”

This weekend, in an essay adapted from a forthcoming book, the New York Times broke the story that Supreme Court justice Brett Kavanaugh is facing a third allegation of sexual misconduct. Then, almost immediately, the paper plunged itself into controversy over a tweet it used to promote its scoop.

“Having a penis thrust in your face at a drunken dorm party may seem like harmless fun,” said the official Twitter account of the paper of record’s Opinion section. “But when Brett Kavanaugh did it to her, Deborah Ramirez says, it confirmed that she didn’t belong at Yale in the first place.”

The Times broke the news in a “news analysis” essay adapted from a book on Kavanaugh by Times reporters Robin Pogrebin and Kate Kelly. The essay focuses on a previously reported accusation from Deborah Ramirez, who says that Kavanaugh nonconsensually thrust his genitals toward her face during a party when they were both students at Yale, but it adds a new accusation.

According to the essay, witnesses also saw Kavanaugh’s friends push his penis into the hands of a female student at a different party at Yale, an action that Pogrebin and Kelly argue establishes a pattern of behavior on Kavanaugh’s part. (According to an update made to the essay, the female student declined to be interviewed, and friends say she does not remember the party, but Pogrebin and Kelly discussed the incident with government officials who found it credible.)

The news was explosive, reigniting the conversation around Kavanaugh that consumed the country during his Supreme Court confirmation hearings last year: Should a man who has been credibly accused of sexual misconduct have a lifetime seat on the highest court in the country?

But the Times’s framing was a little more questionable, even without the Opinion desk’s tweet. Some people asked why the essay was published in the Opinion section in the first place, rather than treated as a straightforward news story. Others wanted to know why the new accusation was buried 11 paragraphs into the story. Still others argued that the new accusation was weak and that it should never have appeared in the Times at all.

But it was the tweet that was really inflammatory. News sites called it vile, offensive, and infamous. Amid widespread outrage, the Times deleted the tweet and issued an apology, calling it “clearly inappropriate and offensive.” Pogrebin, who wrote the tweet, said that she was attempting to get out ahead of any readers who might see Ramirez’s accusations as “harmless fun,” not to characterize the incident that way herself.

Still, there were some observers on the right who didn’t see why the tweet caused controversy in the first place, or who argued that what Kavanaugh has been accused of — thrusting his genitalia at girls during drunken college parties without their consent, on multiple occasions — was absolutely harmless fun.

“I lived with all guys my senior year of college and this happened to me literally every day,” said writer Bethany Mandel in one widely discussed tweet. “One of my roommates walked around naked every day.”

“Of course, nothing so outrageous has ever happened in the annals of American college life, and thank goodness no sitting member of Congress or other Important Person ever participated in anything so disreputable while he was in college,” wrote Roger Kimball facetiously at the Spectator USA.

The controversy over the New York Times tweet sums up what has become a central debate for both the Brett Kavanaugh controversy and in the backlash to the #MeToo movement: Is it very normal and no big deal at all for men to “jokingly” mime sexually assaulting women, as men like Kavanaugh and Al Franken have been accused of doing? Is that behavior only natural and to be expected? Will boys, after all, be boys? Or is this behavior actually an extremely terrible big deal and maybe not natural at all?

What Kavanaugh is accused of is covering up aggression and sexual assault with humor. That’s part of a bigger — and unnatural — pattern.

The idea that it’s normal and basically harmless for boys to be sexually aggressive is a common one, often summed up in the phrase “boys will be boys.” Studies show that victims of sexual misconduct will often use such phrases to minimize whatever happened to them: Boys will be boys, so therefore boys who commit sexual misconduct are not to blame for their actions, which are only natural and not a serious issue.

But Niobe Way, a professor of developmental psychology at NYU who studies masculinity, says the “boys will be boys” philosophy doesn’t fit the data we have on how boys develop.

“We are not born in the world being so abusive with each other,” Way said during a phone call with Vox. “We become that way, because we live in a particular kind of culture that nurtures that kind of behavior.”

Way argues that the repeated choice by many on the right to describe Kavanaugh’s alleged behavior as “harmless fun” along the line of “boys will be boys” is part of a larger cultural pattern that teaches boys and men to cover their aggression under a blanket of humor: to do things that hurt other people and then excuse the action by saying that it was just a joke.

“They [boys and men] think it’s funny because we live in a culture where that kind of aggression is framed as playful,” Way says. “That kind of aggression is seen as ‘I’m just joking,’ which is classic stereotypical masculinity. If you do something offensive or say something offensive, you say, ‘You look fat. Just joking!’ The amount of brutal humor that goes into masculinity. ‘You’re a fucking whore. I’m just kidding!’”

The notion of this “brutal humor” runs through Ramirez’s account of her encounter with Kavanaugh. In the Times essay, Ramirez says that partygoers laughed after Kavanaugh thrust his penis toward her face. The idea was that his alleged actions were framed as a joke: “What if I pretended to be sexually assaulting you? Just kidding!”

Way says that boys learn this strategy over time and that it’s not something that researchers have observed in small children. “They may hit each other when they get frustrated, but they don’t do that kind of assaultive behavior with each other and then say, ‘I was just joking,’” Way says. “If they’re angry, they act out. Humans don’t naturally do that, something blatantly aggressive, offensive, and then pretend that it’s something else. They learn to do that.”

Moreover, she says, the “I’m just joking” move seems to be a distinctly American phenomenon, which means it can’t be a behavior that emerges naturally over time, regardless of cultural context. “You don’t see it in other cultures,” she says. “And once you don’t get a behavior in every culture, you expose its cultural nature.”

Way argues that boys learn to act out and then cover their aggression with humor as a coping mechanism once they realize that American culture forbids them from indulging in the behaviors traditionally seen as feminine, like forming intimate friendships or acting emotionally vulnerable.

“Culture gets in the way and says that those things are lesser because they’re girly and gay, and that therefore if they want those things that they’re not real men,” Way says. It’s because of that cultural belief, she says, that we tend to excuse acts of male aggression like Kavanaugh’s alleged behavior as merely “human nature.”

It’s also why Donald Trump can get away with describing his infamous “grab ’em” quote as “locker room talk,” as something that normal men say all the time; as a culture, we expect men to casually dehumanize women and boast of violent acts in order to prove their masculinity. Meanwhile, the empathy and kindness encouraged in women is often framed as the stultifying influence of civilization taming the natural wildness of men.

Way argues that by teaching boys not to be vulnerable, to act out on their rage and then pretend that they were only joking, we set into place the systems of power that allow men like Trump and Kavanaugh to flourish.

In other words, it’s time to stop dismissing “having a penis thrust in your face at a drunken dorm party” as “harmless fun.”