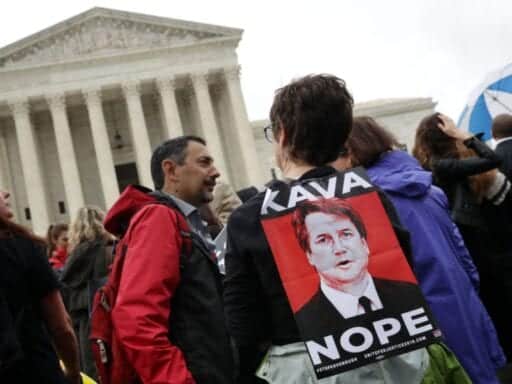 His jurisprudence would render economic and environmental regulation nearly impossible.

There’s a reason that groups like the US Chamber of Commerce are still backing Brett Kavanaugh despite serious accusations that he sexually assaulted one or more women in his younger days, which Kavanaugh denies. Big business knows that Kavanaugh could be a boon to their bottom line.

One of the biggest questions facing the American judiciary is whether the Constitution allows elected representatives to meaningfully regulate the national economy.

But rather than debate this squarely, we are instead faced with grifters like Kavanaugh’s former boss Ken Starr insisting in the pages of the Washington Post that Kavanaugh stands for nothing more than a simple “pro-democracy, let-the-people-govern-themselves vision.”

The truth is quite the opposite — Kavanaugh’s vision, which he shares with Starr and the bulk of the conservative legal academy, is one in which the courts should stand as staunch allies of capital and block any effort at democratic control of big business.

A classic example is the Clean Air Act, which charges the Environmental Protection Agency with identifying forms of harmful air pollution and promulgating rules to cost-effectively reduce it, rather than counting on Congress to pass new laws every time science or business practice changes.

To make this system work, judges need to show deference to the regulatory agencies and acknowledge that the congressional reformers who created them wanted the agencies to have some flexibility and discretion. Kavanaugh, as Starr correctly observers, does not believe that this deference should be granted. This is a crucial aspect of his judicial philosophy, and Starr is right to call attention to it.

In one of the most startling developments of American history, the Reconstruction-era Congress passed the 14th Amendment to try to establish black people’s civil rights, only to see Gilded Age courts rule that the 14th Amendment’s reference to “due process” prohibited all kinds of economic regulations — including civil rights laws! This ultimately culminated in the Lochner-era jurisprudence that was discredited in the 1930s but that many conservative intellectuals are now trying to rehabilitate.

Meanwhile, we have in recent years begun to see the outlines of a new form of it, this time invoking the First Amendment rather than the 14th. This began with the discovery that the constitutional prohibition on censorship also prevents Congress from enacting any kind of meaningful restraint on rich people’s ability to purchase influence in the electoral system, which was first decided in Buckley v. Valeo and then later in McConnell v. FEC and continuing to the better-known Citizens United case.

There’s no telling exactly how far the Court will push this logic. But the pernicious thing about it is that the initial premise in the campaign finance cases that there is an intimate connection between money and speech is not totally absurd.

Most economic activity, at the end of the day, has at least some kind of expressive component, and one could conceivably invalidate anything from a statute punishing fraudulent banking practices to a minimum wage law as a limit on people’s right of self-expression. The crucial issue is the lens of values and priority through which one sees the world.