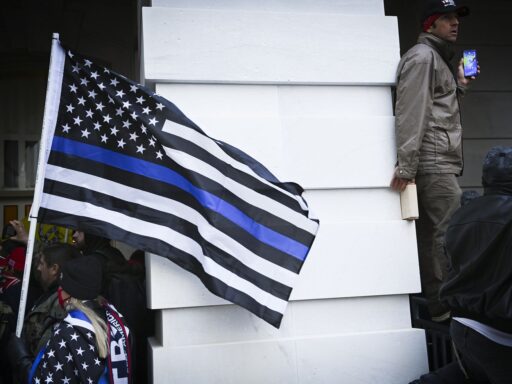 Almost 30 police officers attended the Capitol rally. It should come as no surprise.

As investigations of last week’s riot at the US Capitol continue, one thing has become abundantly clear: The people involved were not just “fringe” elements, disconnected from the mainstream of society.

Prominent among the rioters was a group with a lot of institutional and social power — police officers and other law enforcement officials. Indeed, nearly 30 sworn officers have been identified so far as attendees to the rally leading to Wednesday’s riot, according to NPR.

That includes Virginia police officer Thomas “T.J.” Robertson, who was arrested this week in connection with the insurrection. “CNN and the Left are just mad because we actually attacked the government who is the problem and not some random small business,” Robertson reportedly wrote on Facebook after storming the Capitol.

Those arrested also include his colleague Jacob Fracker, a Virginia police officer as well as a corporal in the state’s National Guard. “Lol to anyone who’s possibly concerned about the picture of me going around,” Fracker apparently wrote on Facebook. “Not like I did anything illegal.”

The declarations are brazen — the officers’ disregard for the law on display, even though upholding it is supposed to be their job. And yet it should come as no surprise that members of law enforcement were in attendance at the riot. After all, it was an insurrection on behalf of a president who has made racism and xenophobia core to his administration and who has repeatedly fanned the flames of white nationalism. Moreover, it was intended to overturn the results of the election, upholding a false narrative about voter fraud that has sought to throw out the votes of thousands of Black Americans.

Essentially, the storming of the Capitol was an insurrection to uphold white supremacy. And sustaining and propping up white supremacy have long been part of police officers’ jobs.

After the end of slavery, police departments played a key role in driving mass incarceration and essentially weaponizing the idea of Black criminality, as historian Khalil Muhammad explained to Vox last summer. And in addition to reinforcing tenets of white supremacy as part of their jobs, police officers were often personally part of white supremacist groups. As historian Linda Gordon notes, police and other law enforcement officers made up a large proportion of the Ku Klux Klan in the 1920s.

So while it may be upsetting for many to see police officers as part of a riot that sought to overthrow American democracy — and that left a police officer dead — it should come as no shock that officers of the law might support the white supremacist ideology behind the riot. This ideology has been intertwined with policing from the beginning.

In recent days, the reports of law enforcement officers present at the riot just keep multiplying. These are a few of the officers reported to have been present that day:

Investigations will likely continue over the coming weeks and months, and none of the officers above have been convicted of a crime in connection with the riot.

Yet as the nation processes the events of last week, it’s crucial to recognize the role that police have played in defending white supremacy throughout American history.

In the South after the Civil War, law enforcement became a tool to keep Black Americans in de facto slavery, since they could be forced to work as punishment for a crime. “All expressions of Black freedom, political rights, economic rights, and social rights were then subject to criminal sanction,” Muhammad told Vox. “Whites could accuse Black people who wanted to vote of being criminals. People who wanted to negotiate fair-labor contracts could be defined as criminals. And the only thing that wasn’t criminalized was the submission to a white landowner to work on their land.”

While Black Americans were being criminalized and forced to work in the South, police also served as enforcers of white dominance in Northern cities, Muhammad told Vox. In the South, he explained, “a white man really could shoot a Black man or woman down in the middle of the street and get away with it. That was less likely to happen in the North — what was more likely to happen was for a white resident to simply call the police.”

And police didn’t just arrest Black Americans, leading to their incarceration — they also took part in mob violence against Black people. In 1919, for example, Black residents of Chicago rose up to protest the fatal stoning of Eugene Scott, a 17-year-old Black boy. White residents attacked them, and police joined in, a commission studying the violence later found. “When police officers had the choice to protect Black people from white mob violence, they chose to either aid and abet white mobs or to disarm Black people or to arrest them,” Muhammad said.

And in addition to perpetuating racist violence and mass incarceration while on the job, police have also had a presence in white nationalist groups. In the 1920s, “probably the single largest occupational group in the Klan were police, or other officers of law and order, like sheriff’s deputies,” Gordon told Vox. And while we don’t know the specific affiliations of the officers under investigation for their role last Wednesday, it should be no surprise to see police at a rally alongside white nationalists or to see pro-police “blue lives matter” flags at the same event with Confederate flags and other racist symbols.

“White supremacy has really crept into police forces,” Sabrina Karim, a professor of government at Cornell University who studies global policing, told Vox earlier this week. And to a meaningful extent, it’s been there from the beginning.

That’s something that became all the more evident last summer when Americans saw on video the brutal killing of George Floyd, a 46-year-old Black man, by police in Minneapolis. It became clearer still when that killing led to racial justice protests across the country, and police and other law enforcement officers in cities across America responded with brutal force — a stark contrast to the treatment of largely white, right-wing anti-mask protesters in Michigan last spring, for example, who were allowed to enter the statehouse with guns. As Vox’s Fabiola Cineas noted, research shows that law enforcement was more than twice as likely to use force against liberal demonstrations than it was against far-right extremist rallies between May and November.

That contrast became even starker at the Capitol riot, as Capitol Police officers on duty appeared to move aside barricades to allow rioters closer to the halls of Congress — one officer even posed for a selfie with one of the insurrectionists. There were likely many reasons for the catastrophic failure of security that led to the invasion of the Capitol on Wednesday, but an affinity between some police on duty and the rioters was probably among them. “There was some degree of complicitness, not among all of the police officers or law enforcement agents, but some,” Karim said.

And now, the fact that off-duty police officers were actively participating in the rally seeking to overturn the election — and throw out the votes of thousands of Black voters — is the latest reminder of how deep the connection between policing and white supremacy goes.

Some have expressed horror at the thought that law enforcement officials could be involved in the storming of the Capitol. “There is no excuse for criminal activity, especially from a police officer,” Houston Police Chief Art Acevedo said in a statement on Pham’s resignation.

But for decades, police in America have had the power to define what is criminal activity, and have frequently wielded that power against Black Americans, sometimes with fatal consequences. They have also been a core part of the white supremacist groups that sought to demonize immigrants and people of color. And any response to the Capitol riot, and to the larger forces of white supremacy in America, will have to reckon with that reality.

An engineer explains the emotion-driven evolution of car design
A venue turned down an interracial wedding, citing “Christian belief.” It’s far from the first to do...
The racial pessimism of Clarence Thomas
We have to accelerate clean energy innovation to curb the climate crisis. Here’s how.
A conservative activist is under fire for calling out Republicans on coronavirus spread
Trump just declared victory over the coronavirus. Here’s why that’s premature.