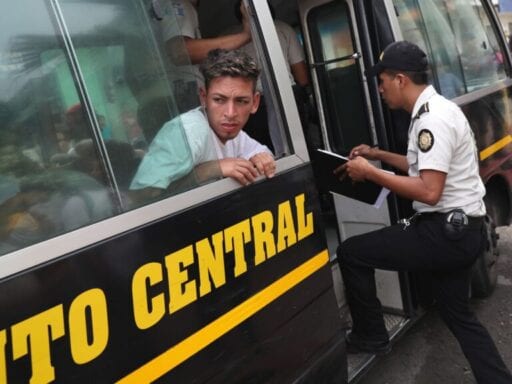 More than 1,700 people have applied for asylum in Mexico. Others are just giving up out of exhaustion.

President Donald Trump is sending 800 troops to the US-Mexico border in anticipation of a caravan of Central American migrants that is still a matter of weeks from arriving — and that could be a pretty small group of people by the time it arrives.

The UN estimated the caravan at 7,322 migrants Monday, after thousands crossed from Guatemala into Mexico (evading Mexican authorities by swimming or ferrying across the Suchiate River). That estimate — the first, and so far only, by an intergovernmental body — has become the touchstone. It reflected the caravan’s growth as it proceeded through Honduras and Guatemala since its departure as a group of 160 or so migrants on October 12.

But a few days after the crossing into Mexico, it looks like the growth trend has reversed.

The Mexican government stated Wednesday night that it believed 3,630 people were still heading north. On Thursday morning, the AP’s Mark Stevenson estimated the number at “4,000 to 5,000” and said it was shrinking, due to exhaustion and worry about the dangers of the journey.

(One migrant’s death after falling from a truck Monday has been confirmed; rumors are circulating about the deaths of two more in Huitxla, Mexico, where the caravan stayed on Monday and Tuesday.)

As of Wednesday, the government of Mexico said that 116 migrants in shelters had agreed to seek “voluntary repatriation” to their home countries. The AP’s reporting indicates that more will join them over the coming days.

Meanwhile, thousands more people are still waiting at the Guatemala-Mexico border, where Mexican authorities are slowly processing applications for asylum in Mexico. The Mexican government’s Wednesday statement said that they had processed 1,743 asylum applications so far.

While a few caravan members pushed through a police fence on Friday to get into Mexico, the Mexican government has since been able to secure the bridge that connects the two countries. The caravan continuing through Mexico now consists mostly of migrants who decided to risk it and cross the river themselves — but thousands of caravan members made the choice to wait and proceed through the official crossing.

The humanitarian organization Oxfam said on Wednesday afternoon that about 2,500 migrants from the caravan were still “stranded” at the Guatemala-Mexico border, waiting to get across. Oxfam coordinator Ivan Aguilar reported that the caravan members were sleeping outside in the rain, some with only bedsheets for protection; “They are exhausted, desperate, hungry and terrified.” Oxfam is providing them with latrines and drinking water.

More people, including more caravans, are continuing to emigrate from Honduras, Guatemala, and El Salvador. But they’re going to run into the existing bottleneck at the Mexico-Guatemala border.

Trump administration officials and other conservatives have long maintained that if Central Americans were “legitimate” asylum-seekers, they’d be seeking asylum in Mexico rather than the US. To many people, that option isn’t terribly appealing. There’s currently a two-year processing backlog in Mexico, thanks to the Northern Triangle exodus. (Asylum applications have spiked 1,000 percent since 2013.)

Asylum-seekers are often subject to mandatory detention while they wait. And Mexico isn’t necessarily a safe place for LGBTQ asylum-seekers — or, considering the Mexican government’s treatment of Central American migrants, for asylum-seekers in general.

Despite all of that, though, it seems that many of the caravan’s members are choosing to stay in Mexico. And it’s not at all clear how many of the people continuing north will last for the several weeks and nearly 1,000 miles it will take to reach the US-Mexico border.

But President Trump, his administration, and the Republican Party are still treating the caravan as a “National Emergency.” Their concern isn’t with the relative size of the caravan; it’s with the idea of a mass of people seeking to enter the United States at all.