The case against otters 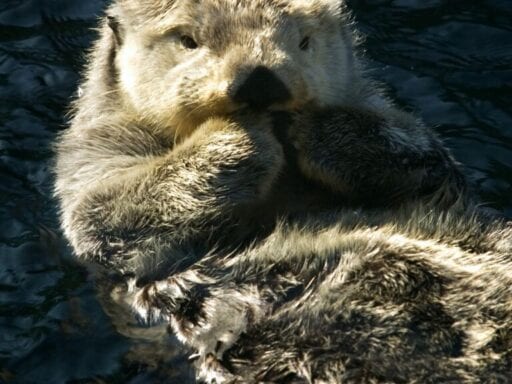 They rape baby seals and hold each other’s pups hostage for food.

People love otters. Hell, Vox.com once employed its own full-time otter enthusiast. And I guess I get the appeal. They hold each others’s hands. They juggle rocks. Baby ones raised in captivity squeak when introduced to water for the first time. Legend has it they save human lives on occasion:

But there comes a point at which rational people have to put adorable hijinks aside and recognize otters for what they are: disease-ridden, murderous, necrophilic aqua-weasels whose treachery knows few bounds. They are not “wonderful animals,” as Ms. Deschanel would have you believe. They’re merciless hellspawn who use their intellects for great evil. Here’s what you need to know about these terrible animals, and why you should fear and hate them.

Otters are mammals of the subfamily Lutrinae, one of two subfamilies contained within the family Mustelidae. The other, Mustelinae, includes badgers, weasels, and ferrets, among other similar mammals. Lutrinae contains seven genuses and 12 different species, spanning every continent save Australia and Antarctica; a 13th species, the Japanese river otter, was declared extinct in 2012, like many otter species before it. Four different species of otter live in Central or South America, another three in South and Southeast Asia, two in sub-Saharan Africa, and one in Europe.

The two species found in North America are river otters and sea otters, the latter of which are also found in Japan and the Pacific coast of Russia. River otters are not currently threatened, and are pervasive in Canada and the Pacific, Atlantic, and Gulf of Mexico coastal areas in the US.

Sea otters, by contrast, nearly went extinct due to aggressive pelt hunting in the early part of the 20th century. While the governments of the US, Canada, Japan, and Russia signed a treaty banning the hunting of sea otters, it took the Endangered Species Act — under which sea otters gained protection in 1977 — for a recovery to begin in earnest. “The saving of the sea otter,” writes Glenn Vanblaricom of the University of Washington in his book on the animal, “is indeed one of the great success stories in marine conservation.”

But the last 40 years haven’t consisted of unerring progress for the sea otter. The species’ recovery has been considerably slower in California relative to other areas. In Alaska’s Aleutian Islands, the species has seen a marked decline since the 1980s.

Theories for what’s behind the drop range widely, but the US Fish and Wildlife Survey’s recovery plan for the species highlights predation, in particular from killer whales, as the most important factor behind the decline.

You bet they do! A 2011 study found 39 anecdotal reports of river otter attacks in North America, 35 of which occurred after 1980. Either due to better reporting or to increased otter savagery, the numbers grew over the decades, from three in the 1980s to 13 in the 1990s to 17 in the 2000s. A decent share of the attacking otters have been rabid; in the ’90s, 46 percent of otter attacks involved rabies, and in the ’00s, 24 percent did. The researchers found four prior scientific publications documenting attacks, including one that reported a deadly otter attack in India.

To be fair, the vast majority — 77 percent — of the attacks the researchers analyzed involved North American river otters, and none appear to have involved sea otters.

You keep hoping that. I couldn’t find any reports of attacks on humans from sea otters, but that may just be a function of sea otters being much rarer than river otters, and spending less time on or near dry land than river otters do. Moreover, sea otters have in at least some cases shown a willingness to attack primates, as in the case of the above sea otters in the Bronx Zoo, which killed a monkey with whom they shared an exhibit. One sea otter off the coast of British Columbia apparently raped and murdered a dog.

4. Well, sea otters are nice to animals besides monkeys and dogs, right?

Nope, they are horrific menaces to other species. And I don’t just mean in the way carnivorous species always are to their prey. Sea otters murder even when it doesn’t provide them with food or offspring, like straight-up sociopathic spree killers. In 2010, veterinarian Heather Harris and her co-authors Stori Oates, Michelle Staedler, Tim Tinker, David Jessup, James Harvey, and Melissa Miller published an article in Aquatic Mammals documenting about 19 cases of sea otters attacking baby seals. Here’s just one:

A weaned harbor seal pup was resting onshore when an untagged male sea otter approached it, grasped it with its teeth and forepaws, bit it on the nose, and flipped it over. The harbor seal moved toward the water with the sea otter following closely. Once in the water, the sea otter gripped the harbor seal’s head with its forepaws and repeatedly bit it on the nose, causing a deep laceration. The sea otter and pup rolled violently in the water for approximately 15 min, while the pup struggled to free itself from the sea otter’s grasp. Finally, the sea otter positioned itself dorsal to the pup’s smaller body while grasping it by the head and holding it underwater in a position typical of mating sea otters. As the sea otter thrust his pelvis, his penis was extruded and intromission was observed. At 105 min into the encounter, the sea otter released the pup, now dead, and began grooming.You read that correctly. After raping a baby seal to death, this psycho licked his paws, like Hannibal Lecter or something.

Approximately that brutal. Harris cites another study that finds that about 11 percent of sea otters found dead on the California coast from 1998 to 2001 were killed, at least in part, by trauma associated with mating. Indeed, trauma is the norm from sea otter mating, not the exception. Here’s Harris again:

Copulation normally occurs in the water where the male sea otter will approach the female from behind, grip her around the chest with his forepaws, and grasp her nose or the side of her face with his teeth.…Facial biting by the male commonly results in the development of skin and soft tissue lacerations of the female’s nose and face that can occasionally be fatal.The problem is worse for females, of course, but younger males often mimic mating behavior with each other, which can cause similar injuries.

6. This is just horrible. Other species don’t do this, do they?

Oh, sure they do. Rape — or, as biologists usually call it, “forced copulation” — is a disturbing fact of life in the animal kingdom. It’s been reported in primates like orangutans and chimpanzees, bottlenose dolphins, and ducks, among many other species.

So that aspect of otter sexuality isn’t too unusual. What’s weirder are a) otters’s tendencies to menace baby seals, b) the fact that male otters kill an awful lot of the female otters with whom they copulate, and c) the necrophilia.

In one prior report on breeding-associated mortality, a tagged territorial male sea otter held a struggling female underwater until her body became limp and then copulated repeatedly with her carcass. Ten months later, this same male was observed with the carcass of another female sea otter. In both cases, the male was swimming, diving, guarding, and copulating with the carcass.

8. Stop! I don’t want to hear any more terrible things about otters.

Too bad! Here are two more.

First, male otters sometimes hold pups ransom to force their mothers to give up some of their food. Here’s how biologists Heidi Pearson and Randall Davis describe it:

A male approached a pup floating on the surface while its mother was diving for food. The male forced the pup under water as if trying to drown it. When the female surfaced, the male stole her food (a clam), after which the female and pup quickly departed.The human equivalent of this is probably going to a grocery store parking lot, finding a woman coming out with a small child, and holding a gun to the kid’s head until the mom gives you some of her food.

Second, otters can give you H1N1, better known as “swine flu,” as our friends at The Verge have reported. Sampling along the coast of Washington State found more than 70 percent of otters there tested positive for H1N1.

9. C’mon, there’s got to be something otters are good for.

Fine, fine, I’ll give them this much: they appear to be helpful in the fight against catastrophic climate change. As explained by the National Wildlife Foundation’s Robyn Carmichael, sea otters frequently eat sea urchins, which in turn are known for eating massive amounts of kelp, which is very good at taking in carbon dioxide during photosynthesis. More otters -> fewer sea urchins -> more kelp -> less global warming. One studyfound that kelp beds where sea otters are present soak up 12 times as much carbon dioxide as beds where they’re not. The overall effect isn’t that large, but every bit helps, and otters deserve some credit for chipping in.

For the record, I’m not actually against attempts to save sea otters as a species. Those efforts are admirable and valuable to the ecosystems of which otters are a part. I just think otters are jerks.

Airlines to Trump: we won’t help you separate migrant kids from parents
Poll: only 32 percent of Republicans think Russia interfered in the 2016 election
Summer is for meteor showers and stargazing. Here’s how to watch.
San Francisco’s facial recognition technology ban, explained
The man without a name
Spotify has 300 million users. It wants more of them to listen to podcasts.