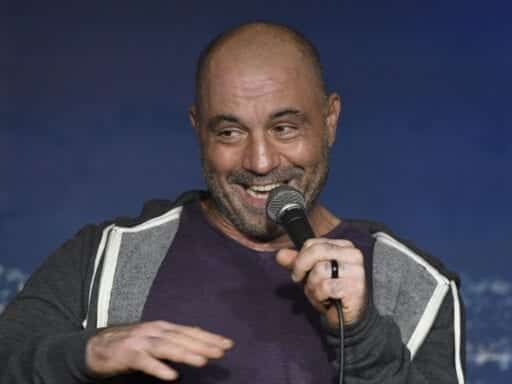 His support is valuable precisely because he’s not progressive on everything.

Podcast star Joe Rogan has shared ugly opinions about trans people on his popular show, and, somewhat in the vein of what we used to call “shock jocks” on the radio, has also said offensive things on questions related to race and gender.

He’s also said positive things about Sen. Bernie Sanders, which the Sanders campaign touted as an endorsement, complete with a video clip.

That probably wasn’t a deeply considered decision on their part. Trans people, understandably, find Rogan offensive and denounced Sanders’s embrace of the endorsement. Rival campaigns pounced and called on Sanders to denounce Rogan.

The drama obscures the fact that Rogan’s support is evidence for the theory of the Sanders campaign, which is that he can pull in unconventional voters — a goal that all liberal activists should share but too often do not.

For years, Rogan has aired hours-long one-on-one interviews on topics ranging from mixed martial arts to comedy, business, politics, and beyond each week. The show’s appeal is a bit lost on me, but millions of listeners — particularly younger men — love it. His backing is valuable in part because he has such a large audience. But it’s also valuable because he’s a controversial figure who doesn’t hold progressive opinions on some issues.

There aren’t very many people who are fully ideologically consistent. Rogan is a typical example. There’s nothing complicated about the choice of whether to want the support of people like him. To do so is the essence of politics.

Winning elections — a necessary first step to vindicating the rights of trans people or accomplishing anything else in politics — hinges crucially on getting people with bad opinions to vote for you.

Democrats need the votes of lots of bigots

It’s relatively easy for progressives to look at an affluent middle-aged straight white man like Rogan, hear him making transphobic comments, and contemplate the idea of simply casting him out of polite society.

Rogan is obviously not the only person in the United States with anti-trans views who might otherwise be open to voting for Democrats. Trans issues have been much more visible in recent years and, accordingly, a 2019 Public Religion Research Institute poll found that 62 percent of the public said they have become more supportive of trans rights causes over the past five years. (I would include myself in that group.)

The good news for trans people’s concrete political interests is the vast majority of the self-identified Democrats with not-so-woke opinions on trans issues will vote for the Democratic nominee in November. Unless, that is, they hear through the media that the new position of the Democratic Party is that dissenters from the trans rights agenda need to be purged and shunned — in which case they might stay home or vote for Trump.

To many liberals these days, urging a sense of political pragmatism on this subject is itself anathema. The problem with anti-trans views is that they are wrong and must be condemned, so the question of whether accommodating them is tactically useful or not shouldn’t arise.

It’s exhausting to see a refusal to tolerate bigotry framed as a demand for moral purity or an unwillingness to compromise or work with people who have different points of view. Bigotry is not a perspective that deserves engagement beyond condemnation.

As Dylan Matthews put it, liberals “think that discriminating against or maligning someone on the basis of membership in a protected class — women, trans people, black people, and other racially oppressed communities, etc. — violates a rule that should be inviolable. In this view, such discrimination (be it legal, or expressed through hate speech, etc.) is not just wrong because it has bad effects, or because it harms members of the groups in question; it’s wrong because we have a duty to treat humans as equals, and it is never acceptable to violate that duty, even when doing so seems politically expedient.”

This is a reasonable moral theory. But my suspicion is most people who embrace it are not thinking clearly about exactly how inexpedient it is. As of 2018, for example, 47 percent of African Americans told the General Social Survey that it is “always wrong” for two same-sex individuals to have sex.

Meanwhile, 40 percent of white Democrats deny that the black/white gap in jobs, income, and housing is mainly due to discrimination.

To complete the troika of unwoke views, about 40 percent of Hispanics tell the General Social Survey that “it is much better for everyone involved if the man is the achiever outside the home and the woman takes care of the home and family.”

Democratic Party politicians have plenty to debate, but basically none of them would deny that discrimination is a major source of problems in black America, that same-sex relationships are fine, or that it’s okay for married women to have jobs. But if Democrats tried to demand unanimity on these very basic points from actual voters, they’d lose huge swathes of their base. The idea that there should be “zero tolerance for bigotry” or that some things should be beyond pragmatic politics might sound nice, but if you actually intend to live by them, get ready to lose every election ever — something that I don’t think will be very helpful to the people who anti-bigotry politics is supposed to protect.

You need to win the votes of inconsistent people

Alexander Agadjanian of MIT and Elliott Morris of the Economist run the fun American Voter Bot that randomly selects from the 65,000 participants in the Cooperative Congressional Election Survey and tweets out their answers to some basic demographic and public opinion questions.

Sometimes you get voters who are clearly on the left or the right. But more common are voters like this fellow from New Jersey who agreed with Trump on immigration but voted Democratic based on liberal views on the minimum wage, the environment, and criminal justice.

Republicans, too, get plenty of votes from people like this older gentleman from Ohio with conservative views on some subjects, who’s also sympathetic to gun control.

All told, Morris and Agadjanian crunched the numbers on seven issues: concealed-carry permits, deportation of illegal immigrants, abortion, the Clean Air Act, mandatory minimum sentences for non-violent drug offenders, the Affordable Care Act, and raising the minimum wage. They found that 17 percent of the public takes the progressive position on all seven issues and 6 percent takes the conservative position. If you throw in the people who are liberal on five or six out of seven, you end up with 45 percent of the population. To insist on anything approaching total agreement would be to condemn yourself to permanent minority status.

And note that this is not because the progressive stances on these issues are unpopular. Only 29 percent are conservative on at least five out of the seven. It’s just that even in an era of polarized politics, the kind of full ideological alignment that’s common among political leaders is relatively rare among rank-and-file voters.

People like Rogan — not that interested in politics, not totally synced up with contemporary ideological constructs, somewhat cross-pressured on issues — are very typical of the American voter. To the extent that you can get a famous cross-pressured person to endorse you, you have won a huge victory and would be foolish not to trumpet that fact.

Yes, there are limits

My colleague Zack Beauchamp, writing about the Rogan controversy, noted that “virtually everyone called on Donald Trump to reject former Ku Klux Klan leader David Duke’s endorsement in 2016; the fact that he didn’t really do it kicked off a major political firestorm.”

To me, the distinction here is fairly obvious: David Duke isn’t a guy with a range of views about a range of subjects, some of which are bigoted — he’s a leader of a racist ideological project, and the fact that he was excited about Trump tells us something specific and disturbing about Trump’s politics. The fact that Trump has never clearly distanced himself from white nationalists’ enthusiasm for him, in turn, tells us something that’s additionally disturbing about Trump’s politics.

But to take a converse example, the fact that Peter Thiel is both gay and enthusiastic about Trump doesn’t show that Trump has a secret pro-LGBTQ political agenda. It just shows that at this point in time, gay rights causes aren’t particularly central to Thiel’s politics.

By the same token, if Rogan’s primary professional identity were as an anti-trans activist, that would be one thing. But the main subjects on his show are combat sports and standup comedy. His political views are, it seems to me, mostly confused — he thinks of himself as an enemy of the establishment, but his main conviction is the extremely centrist view that we should worry about the excesses of political correctness. He does political episodes occasionally, but never really on specific policy topics. Somehow out of that heady brew pops the idea that he likes Sanders because he seems him as a man of integrity and conviction who stands apart from other politicians.

The Democratic nominee is going to want to get support from “never Trump” columnists, people who voted Green in 2016, white Democrats in denial about racism, religiously observant black and Latino people with traditionalist views on sex and gender, and all kinds of other people with sundry bad political opinions. Turning down Rogan doesn’t make sense.

Pragmatic Democrats can’t let the fear of hypocrisy rule them

The most reasonable point I saw Sanders critics make about the Rogan controversy is that anti-anti-Rogan people were asking them to extend some courtesy to Sanders that Sanders supporters would never extend to them.

This is fair enough. Primary politics induces a lot of bad online behavior from all quarters, and the Sanders campaign itself often flirts with a style of ideological rigorism that is annoying and counterproductive.

That said, the old saying that hypocrisy is the tribute vice pays to virtue is appropriate here. People who believe that political pragmatism is important can’t just abandon that principle because Sanders’s campaign did something pragmatic. It’s the opposite. Whatever Sanders supporters may say, their actions demonstrate a clear appreciation for the virtue of pragmatic behavior. That should make moderate Democrats chill out a bit about the prospect of a Sanders ascendancy.

Meanwhile, the question of whether Democrats should try to cast out every single person who dissents from every important item on the progressive agenda is a lot bigger than the primary. What may feel like a useful way of sticking it to Sanders or being a good ally to trans friends, in practice, sends an exclusionary message to a large population of voters that Democrats need if they want to win. The big tent really is important. It’s how Democrats can win and do the work necessary to make life better for marginalized groups, like the trans community.

The Supreme Court will decide if Trump can fire the CFPB director. The implications are enormous.
How some 2020 Democrats would actually get their climate plans through the Senate
You can help make psychedelic therapy for depression a reality
The past 72 hours in Sarah Sanders’s dinner and the civility debate, explained
Vox Sentences: Raising the bar for asylum
The government is distributing emergency Covid-19 supplies. But some states are losing out.