The case for large cities in a post-pandemic world 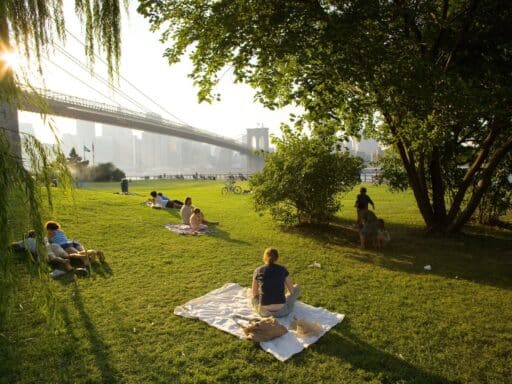 Young families and wealthy people are decamping for the suburbs — which might make cities more pleasant for everyone else.

President Trump says New York City is dying, and if you listen to a certain kind of New Yorker, you might agree: The New York Post has heralded 2020’s pandemic and social justice reckonings as a return to the “bad old days” of the city in the 1970s and ’80s, while Trump lawyer and former Mayor Rudy Giuliani has been busy spreading fear about urban violent crime.

New York was indeed the earliest epicenter of America’s coronavirus crisis, with more than 800,000 cases and more than 35,000 deaths statewide since it began. But when Trump and Giuliani talk about how New York is “over,” they’re not talking about Covid-19. They’re referring to the kinds of people who are leaving — middle- and upper-class people who can work remotely and afford homes in the suburbs, or who already own second ones.

It’s a trend that’s happening in other parts of the country, too: Some wealthy people and young families were leaving big cities like Los Angeles and Chicago even before the pandemic hit. But as with the rise of online shopping and conversations about racial justice, Covid-19 accelerated patterns that already existed. And while some politicians and media outlets have portrayed this as a harbinger of death to big urban centers, there’s a strong case to be made that in a post-vaccine world, cities like New York will emerge more livable than they once were.

Jeremiah Moss is not usually the kind of person one turns to for good news. He’s the author of the blog Vanishing New York, which since 2007 has been chronicling the closures of small businesses and beloved mom-and-pop stores all over the city. In 2018, I interviewed him about why popular slogans like “shop local” aren’t enough to save actual small businesses, because no amount of sales will compensate for the skyrocketing rents that powerful real estate developing companies are charging tenants.

Yet now, after months of listening to politicians claim that the city is dying, Moss is actually seeing it come alive. The mass exodus of people leaving, he argues, might actually make cities more hospitable to middle- and working-class folks. Here, he explains why.

You mentioned in a recent blog post that a lot of the small businesses that are closing now had survived 9/11 and the financial crisis of the ’70s. What’s different now?

The pandemic has wiped everything out, but we shouldn’t be surprised. In some ways, I have a different emotional response than a lot of people who are shocked. I’m like, “yeah, that’s been happening. I’ve been talking about it for over 10 years.” Whatever grief I feel is probably going to hit me after the pandemic is over. When the smoke clears, we’re gonna look back and go, “This carnage could have been stopped.”

What should cities have done to prevent the mass closure of small businesses?

So many of us have been fighting for protections for small businesses for years, and the city council and the mayors have said no. If they had said yes five or 10 years ago, a lot of businesses would not be dying right now. We’re in an emergency, and we need commercial rent stabilization. We had commercial rent control during World War II and into the ‘60s because New York City was in an emergency then. We’re in an emergency now and it’s the right time to pass [Commercial Rent Stabilization Bill 1796]. Unfortunately, it’s too late for a lot of businesses.

The last time we talked, you made the case that it’s almost impossible for a middle-class person to open a thriving small business in a major city like New York. Do you think that’s more or less true now?

We have to see what happens after the pandemic. Are we going to be in a city where the rents have come down, where we can actually have a renaissance of New York, where we can have the working and middle classes gaining access to space that they could not have access to before because the rents were much, much too high? That’s the positive possibility.

The negative possibility is that the rents don’t come down in these spaces and they’re completely turned over to chains or Amazon fulfillment centers. That could happen. It could be a tragedy on top of a tragedy.

Are there any cities that you’ve seen that have done a good job of protecting small business during the pandemic?

I don’t know of any cities that have done a good job of it because unfortunately we’re all caught in the neoliberal idea of the competitive city model, so we all have the same policies and the same mentality.

People were already moving away from cities about two years or so before the pandemic hit, and then there was this mass exodus of people in March. I don’t know that people are going to come back — they can work from home now. If what you really want is a suburban life with a yard and a car, why wouldn’t you do that? If I wanted a house and a yard and a car, I wouldn’t be in a city. Why do you want to be here? So I don’t think a lot of those people are coming back, and that’ll be good for cities.

How would people leaving be good for cities?

My hope is that the long-term effects will be cities that attract people who truly love city life and are not trying to recreate suburban life in an urban environment. Cities are communal, they attract people who don’t want homogeneity, who can tolerate a little chaos, and who aren’t afraid of other human beings.

A lot of the people who were attracted to New York in the 2000s seemed to want to walk around in private bubbles. One of the reasons people left is not because they’re afraid of Covid, it’s because they didn’t want to be bored. What they meant was they couldn’t shop or go to restaurants. If you come to New York from somewhere else with a purpose of consuming, and you remove consumerism — which is what the pandemic did — there’s no reason for you to be here.

There’s no privacy in a city. We live in public here. It’s ironic, but I’ve felt that [during the pandemic] public spaces are becoming more public than they have been in years. It’s been wonderful. Washington Square Park has become so much more of a free public space than it’s been in 20 years. Even in the presence of rules, like social distancing, and wearing masks, which people are following very well, there’s a sense of connection.

The streets have started to feel more humane than they did prior, which we see in tragedies. It happened after 9/11 very, very briefly. This is a much more extended experience. There’s so much art and life going on in Times Square right now, but if you’re looking at it through a white bourgeoise lens, you’re not going to see it.

What about all the luxury apartment buildings that are now sitting mostly empty since the wealthy people are gone? What’s going to happen to them, and will developers stop building them?

I flip-flop between idealism and total despair about the reality of the awfulness of humanity. But of course I would love to see those buildings become affordable housing. What will really happen; who knows? I see buildings keep going up. Why haven’t they stopped? Don’t they know we’re done with this now? Have they gotten the memo that this is over? But we still exist in this pro-growth model of capitalism. That’s what has to change.

The author Arundhati Roy wrote early on that the pandemic is a portal. I think those of us who are hopeful in the presence of this tragedy hope that this portal will open and that we’ll be able to leave the era of neoliberalism behind and we can see the cruelties of it, the cruelties that resulted in Donald Trump being president, cruelties that started with Ronald Reagan. Maybe people will be so tired of having been forced to be private in quarantine that they’ll want to share space and connect. That’s my hope. Humanity doesn’t tend to move in that direction, so we’ll see.

Plight at the Museum
One Good Thing: This true crime podcast about a murderous doctor is even scarier during a pandemic
HBO’s Random Acts of Flyness is starting to fulfill its enormous potential
The Great Recession was called a “mancession.” This one could be devastating for women.
The woman in line to be Puerto Rico’s next governor says she doesn’t want the job
Thousands of Swiss women walked out of their jobs to protest inequality