The CDC released new guidelines for reopening schools, businesses, and other public spaces 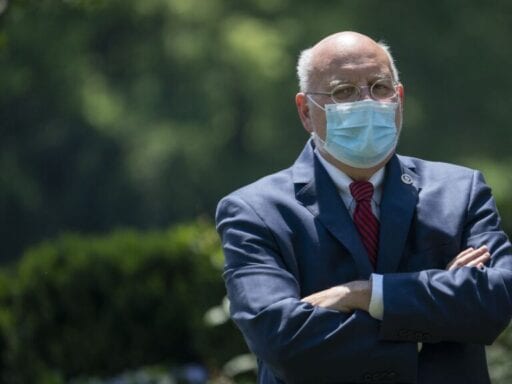 Share
Loading...
Dr. Robert Redfield, director of the Centers for Disease Control and Prevention (CDC), attends an event about coronavirus vaccine development in the Rose Garden of the White House on May 15, 2020 in Washington, DC. | Drew Angerer/Getty Images

The 60-page documents suggests school staff and students get their temperature checked daily, along with disinfecting classrooms and buses daily.

The Centers for Disease Control (CDC) recently released its most detailed reopening guidelines yet, weeks after the White House reportedly suppressed them.

The new 60-page guidance is not quite as detailed as a version that leaked on May 13, as first reported by the Associated Press, but has a structure and comprehensiveness that has not been previously seen in federal reopening documents.

It covers not just nonessential businesses, but also offers suggestions on contact tracing and best practices for schools, places of worship, and public transportation. The document, while not compulsory, is useful because it provides a step-by-step plan; but unfortunately — in spite of the assurances of CDC Director Robert Redfield — few states actually meet the suggested criteria for phase 1 of reopening, a fact that hasn’t kept about 30 states from beginning to do so.

The gating criteria are similar to those laid out in the White House guidance for Reopening America in early May. The document notes that some areas will not be able to move through the phases in order, as viral transmissions rise and fall. “Given the potential for a rebound in the number of cases or level of community transmission, a low threshold for reinstating more stringent mitigation standards will be essential,” reads the guidance.

The document also offers detailed guides for individual jurisdictions and public spaces like retail stores, bars, and schools during the reopening process.

“This guidance sets forth a menu of safety measures, from which establishments may choose those that make sense for them in the context of their operations and local community,” it reads.

The document comes as many schools are making plans for how or whether to reopen in-person learning. The guidance recommends that schools remain closed in phase 1 of re-opening.

Schools can safely start to reopen in phase 2, but the CDC recommends that several important health measures be put in place first, such as daily temperature checks for staff and students, and having students eat lunch in their own classrooms. It also strongly encourages cloth facial coverings for staff and older students, especially when social distancing isn’t possible.

Hygiene supplies, like soap and hand sanitizer, should also be readily available for students, and classroom and bus surfaces should be disinfected daily. Windows and doors should be open as much as possible to increase airflow, however, this likely won’t be possible for districts in cooler, northern locales.

The guidance also offers ideas on how to keep students physically separated as safely as possible. While some school districts are looking at limiting the number of days students are physically present at school, the CDC recommends keeping the same group of students and staff together as often as possible. This would be easier to accomplish with elementary students, but middle and high schoolers, who typically share a classroom with a new set of students and staff for each class period, could see big changes to the way their classes are scheduled as a result.

Several of these important criteria, however, are complicated by regional differences in testing capacity and reporting. Adding to the confusion, CDC Director Robert Redfield said Tuesday that it was safe for states to start reopening now, in violation of his own agency’s guidelines.

“I want to clarify that the community-based transmission, the community-to-community transmission that overwhelmed the public health departments in late February, March, April, that’s really coming down,” Redfield said in an interview with the Hill.

Most states are now taking definitive steps towards reopening — though it appears that only 13 states had actually met the CDC guidelines to do so, as of May 17.

White House guidelines were in place in late April, when Georgia, Tennessee, and South Carolina began the process of reopening. Georgia in particular made the most aggressive move towards reopening, allowing bowling alleys, gyms, tattoo parlors, and barber shops, nail care technicians, beauticians, and massage therapists to open their doors on April 24, and restaurants and movie theaters who enforce strict social distancing guidelines, to open April 27.

Because of the lag time between infection and a positive test, it’s still too early to make definitive statements about Covid-19 in a place like Georgia. But after an initial decline in positive tests just after reopening (from infections that occurred two weeks earlier), Georgia is again seeing its infection rate begin to rise again.

According to the 60-page document, Georgia may need to start considering reinstituting a shelter-in-place order or other, more strict social distancing measures. However, states aren’t required to follow the guidelines, and, moreover, there’s enough room for interpretation within the guidance that Gov. Brian Kemp could wiggle out of doing so.

The confusion lies in some of the soft language used throughout the document. Despite the use of firm gating criteria, some recommendations within the document are prescribed for areas with “low levels” of Covid-19 spread and those “with confidence that the incidence of infection is genuinely low.”

Adding to the difficulty in managing a cogent reopening process is regional differences in infection rates within states themselves. For example, in Virginia, many rural areas of the state have low infection rates to begin with, and some meet several of the gating criteria for phase 2 or 3. But in the northern part of the state, in the Washington, DC suburbs, for example, community spread is still happening at a fairly high level, which the guidance says would mean waiting to begin reopening or move through the phases.

This puts Virginia Gov. Ralph Northam in a difficult spot in making statewide decisions. In response, Northam has lifted many of the statewide restrictions while allowing some counties, like in northern Virginia, to apply to reopen later. It’s a pattern now seen all over the country. Progress is made in controlling the outbreak in one part of a state, while the situation worsens in another city or county. Reopening done well in the US will likely see many fits and starts until an effective treatment or vaccine becomes widely available.

What’s going on with hotel booking prices in Texas?
With just days to go, Trump bets big on Pennsylvania
The US has a 2.5 billion-pound surplus of meat. Let’s try to visualize that.
Trump’s rambling attacks on Mueller and Democrats at the Putin presser, annotated
Exclusive poll: Biden won the debate convincingly
Coronavirus: The debate over reopening America’s schools