The chaos at the Capitol wasn’t a movie 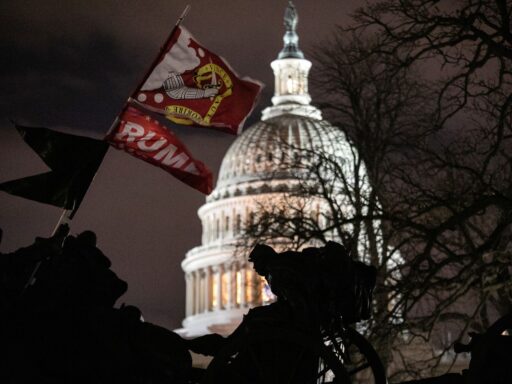 This is not Hollywood, and the heroes are not coming.

You got the feeling they all thought they were in a movie.

The insurrectionists who stormed the Capitol wrote, directed, and starred in their own films, scaling walls, bellowing from podiums, mugging for their buddies’ glamour shots. Hungry for attention, having written a blockbuster movie of their own devising patterned on the ones they’ve watched all their lives, they gave out their names, the better to see them in lights.

But it was the senators and representatives who reconvened later in the evening to finish the business of certifying the new president who seemed most aware of their starring roles. The other guys were merely featured extras, dressed in camo and outlandish costumes designed to cow and clown on their targets. These elected officials, though — they were the named stars. They were the ones we’d heard of before. They fancied themselves the ones we had showed up to listen to.

So they talked on the floor of the House and the Senate, ostensibly to one another but obviously to the audience at home. Vice President Mike Pence, seated before the Senate, seemingly addressed the insurrectionists: “To those who wreaked havoc in our Capitol today, you did not win. Violence never wins. Freedom wins, and this is still the people’s house.” Senate Minority Leader Chuck Schumer blamed President Trump for inciting the violence, but echoed Pence’s remarks: “Democracy’s roots in this nation are deep, they are strong. They will not be undone ever by a group of thugs. Democracy will triumph, as it has for centuries.”

And Senate Majority Leader Mitch McConnell addressed the people at home. “I want to say to the American people the United States Senate will not be intimidated,” he said. “We will not be kept out of this chamber by thugs, mobs, or threats. We will not bow to lawlessness or intimidation. We are back at our posts. We will discharge our duty under the Constitution and for our nation. And we’re going to do it tonight.”

Just hours before, President-elect Joe Biden proclaimed in an address to the nation that “the scenes of chaos at the Capitol do not reflect a true America, do not represent who we are. What we’re seeing are a small number of extremists dedicated to lawlessness. This is not dissent. It’s disorder. It’s chaos. It borders on sedition, and it must end now.”

They were speeches you’d hear in a movie, with music swelling. That members of Congress were performing for us was never more clear than when Sen. Josh Hawley (R-MO), voicing objections to Pennsylvania’s electoral votes, looked straight into the camera as he delivered his remarks. He barely glanced around the room he was actually in, not even bothering to keep up the fiction of collegiality.

The speechifiers tried mightily to draw us into their narrative — to convince us its climax had been reached, and now order would be restored. Biden, and many others, called upon the president to restore that order. Whispers of invoking the 25th Amendment proliferated in the press. But the implicit message was that if we could just hold on for two more weeks until January 20, Inauguration Day, we’d have made it through Act 3 of this American blockbuster.

And this idea made some sense, because all day we’d been steeped in it. January 6, 2021, was in some respects like any other day in America in the last five years; a day to marvel and tweet about the “timing,” the “story beats” we were watching, about America’s finale season, about how the writers had gone off the rails. We’d woken up that morning to find Rev. Raphael Warnock was set to become the first Black senator from Georgia, and — if that wasn’t enough for symbolism — that he also preaches from the pulpit once held by Martin Luther King Jr. The balance of power was about to flip. It was monumental.

On the streets outside the Capitol, people had assembled for the final day of the latest “Jericho March,” a series of events organized by “Judeo-Christian” leaders. The most recent Jericho March in DC was in December. The name they picked was purposeful. In the Bible, the people of Israel are instructed by God to march around the fortified walls of the city of Jericho, blowing shofars — rams’ horns used in ancient times for military purposes — for a full week. On the seventh day, the walls fell down, and the people of Israel took possession of the city.

“Take America Back!” a graphic on the site proclaimed, next to a registration form for attendees. A call to “Be There” and a promise that “Washington D.C. Will Be Wild” flanked an image of Trump pointing straight at the reader, reminiscent of images of Uncle Sam.

The last Jericho March in DC had taken place on December 12, but organizers planned a full slate of events from January 2 to 6, culminating in blowing shofars and marching around the US Capitol at noon on January 6 for the fifth time in five days. The marchers’ stated aim was to follow the ancient story’s example — by assembling in DC, with “Stop the Steal” as their cause and hope for a miracle in their hearts. So they brought a lot of shofars, which today are traditionally blown in Jewish practice during Rosh Hashanah and to mark the end of Yom Kippur, but have been appropriated in recent decades by pockets of evangelicals, too. The shofar is believed by many Christians to be the “trumpet” that will sound when Jesus returns at the end of days. At the apocalypse.

Meanwhile, a “Save America” rally was planned for 10 am, where the sitting president of the United States told his supporters, after reiterating every discredited conspiracy theory in the book, that “we’re going to try and give our Republicans, the weak ones, because the strong ones don’t need any of our help, we’re going to try and give them the kind of pride and boldness that they need to take back our country.” After filling their ears with what they wanted to hear for more than an hour, he told them to set out for the Capitol.

And so they did, scaling the walls, rushing up the steps and into the rotunda. They flooded onto the same set, if you will, where Biden’s inauguration will take place in just two weeks. They unfurled their Trump flags and slammed on the doors. They created images of apocalypse.

Apocalypse doesn’t really mean the end of the world, though that’s often how it’s used. It’s rooted in a Greek word that means “revealing” or “uncovering.” In times of apocalypse, the curtain is pulled back, and we see what’s really been going on. We glimpse reality beneath what we see on TV.

But that reality is difficult to watch, difficult to accept. We would rather close the curtains, pretend we didn’t just see what we saw. Distract ourselves with myths and stories. Hope what’s happening behind those curtains sorts itself out on its own.

In Hollywood blockbusters, sieges on the Capitol or the White House and threats to the president or to the American way of life traffic in apocalyptic imagery that looks a lot like the pictures we saw on our screens on January 6. Smoke, flags of other loyalties, gleeful rebels parading through hallways, stealing podiums, overrunning the orderly chambers; people barricaded, ducking behind desks, calling home to tell their families they love them.

Those blockbusters have been feeding us the same story for decades: that when the barbarians are at the gate, they may break through for a little while, but justice will always prevail. Because what comes after those apocalyptic images is the movie’s version of a revelation: that truth, justice, and the American way will win out over sedition and violent traitors. That we are on the side of the good guys, and here, in America, the baddies don’t win. Coups happen elsewhere. Not here.

In the movies, it all happens within the span of a couple of hours, and we’re never in any real suspense about how the story will end. Some hero will show up. Dutiful citizens will beat the terrorists, or renegade cops will take them down, or the president himself will save the day. We know, going in, that the “good guys” (meaning America) will triumph. We will never have to face the reality — that we may have invited the enemies in, that they were here all along, that we created them — because someone will fix it.

So it’s no wonder that elected officials, faced with an entirely foreseeable chaos that went somehow unanticipated, resort to casting themselves in that movie, too. They insist that the enemy will not prevail. They tell us this is not who we are. They try to draw the curtain back over the apocalypse.

Watching them play their designated parts in their movie late on the evening of January 6, one thing was clear: They’d gotten the story beats all wrong. The senators and Congress members and vice president and president-elect hope, with all their might, that their speeches were the start of the movie’s third act, the point where the crisis has been averted and the denouement could begin.

That would be great, but I don’t think it’s true. The evening of January 6, with its speeches about how the apocalypse had been averted, was the start of Act 2. The action is just starting to rise toward the climax. (After all, within hours, members of Congress were nearly coming to blows on the floor of the US House of Representatives.)

If we refuse the revelation, if we can’t look at reality straight-on — if we can’t bear to acknowledge that this is us, that this is who we are, and that they can win, that virtuous victory is in no way a fait accompli — then by the end of Act 2, the stars of the movie will not be those people giving brave speeches. They’ll be the fools who didn’t listen. It seems they already are.

America is no movie. There is no Hollywood studio in charge. And no heroic ending is guaranteed.