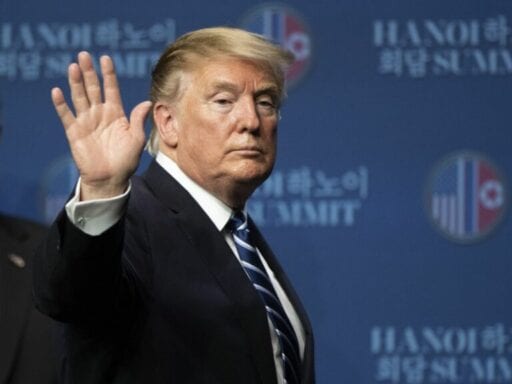 It was a wild weekend for Trump’s North Korea policy.

The aftermath of President Donald Trump and North Korean leader Kim Jong Un’s unsuccessful summit in Vietnam last week has been nothing short of startling.

On Saturday, the American and South Korean military defense heads agreed to end two major military exercises between their countries — all in an effort to reduce tensions with North Korea. Indeed, it’s likely to delight Kim, who has long railed against the military drills as preparation for a US-led invasion of North Korea.

The next day, the New York Times reported that Pyongyang hacked more than 100 targets, including some in the US, while Trump and Kim were meeting in Vietnam. It goes to show that even as the two leaders are working to build a rapport, North Korea’s hackers operate unchecked.

Also on Sunday, US National Security Adviser John Bolton went on numerous news programs to discuss the Vietnam summit. While he defended the outcome, he revealed — shockingly — that he and Trump disagree on a key question: whether the US made a massive concession to Kim by holding high-profile summits with him.

And that evening, the president surprisingly tweeted that his inability to cut a deal with the dictator had more to do with his former lawyer Michael Cohen’s congressional testimony than with his flawed diplomacy, calling the Democrat-led spectacle “a new low in American politics.”

Put together, these latest developments show that the Trump administration’s North Korea policy is in chaos. If you missed any of it, don’t worry. We’ve got you covered.

The US and South Korea suspend military exercises

Around 6 pm on Saturday, the US and South Korea made a shocking announcement.

That’s huge. Those two military drills allow US and South Korean forces to train side by side and learn how to work together in case, well, there’s a need for them to work together — like during a war with North Korea. Without these drills, their ability to fight with one another to win that conflict shrinks.

The fact that they’ve been canceled must be music to Kim Jong Un’s ears. For years, North Korea has argued that these joint drills, which feature thousands of troops and high-tech equipment, are a threat to its security. After all, the better the two countries can fight alongside each other, the better they could overthrow the Kim regime.

It’s partly why North Korea has long wanted a so-called “freeze for freeze” deal where Pyongyang stops testing weapons while the US and South Korea stop participating in major exercises. The cancellation of the drills, adding to the fact that Kim hasn’t tested a nuclear bomb or missile since September and November 2017, respectively, means Kim has effectively secured that agreement.

Trump, for his, part, seems fine with it.

The reason I do not want military drills with South Korea is to save hundreds of millions of dollars for the U.S. for which we are not reimbursed. That was my position long before I became President. Also, reducing tensions with North Korea at this time is a good thing!

On the one hand, signaling to North Korea that the US doesn’t pose a threat is potentially good and could build trust between Washington and Pyongyang down the line. On the other, Trump’s reasoning — that not doing the drills saves “hundreds of millions” — is a bit off, since one joint drill costs around $14 million.

Trump tweeted about it again on Monday afternoon, this time noting that the drills were canceled solely because he wanted them to be after he met with Kim met in Singapore last June.

The military drills, or war games as I call them, were never even discussed in my mtg w/ Kim Jong Un of NK—FAKE NEWS! I made that decision long ago because it costs the U.S. far too much money to have those “games”, especially since we are not reimbursed for the tremendous cost!

The question now is if the gambit will work, and some experts, like Jeffrey Lewis of the Middlebury Institute of International Studies, are skeptical. He noted last week that the US canceled a major military exercise in 1994 for similar reasons, only to have North Korea still consider the remaining drills as provocative. It’s therefore possible that “over time, Pyongyang may well come to hate whatever comes next,” he added.

Which means that though the joint decision makes sense now, it could prove to be a big problem in the future.

Trump is focused on two main things when it comes to North Korea: making sure it gets rid of its nuclear weapons and, over time, improving Washington-Pyongyang relations. While Kim is focused on those issues too, he clearly has other objectives in mind.

According to the New York Times on Sunday, North Korea continued its campaign to hack US and European companies even as Kim sat alongside Trump during their Hanoi summit last week. It’s a brazen move that shows there’s still a long way to go to normalize any relations between the two countries, even outside of the nuclear issue.

As of now, it’s unclear exactly why North Korea did this, although there are some suspicions that it wants access to the intellectual property of the targeted US banks and energy companies, since many were located in Houston and New York City.

What is clear, though, is that North Korea has a highly sophisticated cyber program.

North Korea was behind the May 2017 WannaCry cyberattack that used ransomware — where hackers scramble a victim’s files and then demand money to unscramble them — to infect businesses, banks, hospitals, and schools in more than 150 countries. One of the biggest strikes occurred in Britain, where it caused havoc in the health care system and interfered with surgeries and emergency services.

Experts and analysts also believe the Kim regime was behind the $81 million cyber heist of the Bangladesh Central Bank in 2016 and the Sony Pictures hack in 2014 right before it released The Interview, a comedy about two Americans who assassinate Kim Jong Un.

Of course, North Korea was just continuing its cyber efforts, so it’s not wholly unexpected that this happened during the summit. But if Kim were serious about decreasing tensions between his country and the US, he could’ve asked for a brief pause while he dined with Trump. The fact that he didn’t could provide some insight into his real thinking as it relates to future US-North Korea relations.

The Sunday news shows are one of the best chances for an administration to make its case about its initiative of the day. This past Sunday, it was National Security Adviser John Bolton’s turn to explain why Trump and Kim didn’t sign a deal when they met in Hanoi last week.

For analysts, it was must-watch TV. When Bolton went on the same shows last year, he almost tanked Trump’s diplomacy with North Korea by saying the administration wanted Kim to abandon its nuclear weapons program just like Libya did. North Korea’s leader bristled at that, since Libya’s dictator was toppled with Western support years after he relinquished his arsenal.

BRENNAN: But, in the meantime, as we say, they can still produce nuclear fuel. And as you saw after the President left Hanoi, Kim Jong-un stayed there. I mean he was walking around touring hot spots in Vietnam. He no longer looks like a pariah. Didn’t he gain from this?

BOLTON: I don’t think that’s the President’s view at all. It– it’s–

BRENNAN: He sat across from the President almost as if an equal.

BOLTON: He– he did that in Singapore. The President’s view is he gave nothing away.

BRENNAN: But do you actually believe that?

Let’s be clear about what happened here: When given the chance to defend Trump’s belief that he has made no concessions to Kim, Bolton demurred, waving away the issue by claiming that his belief wasn’t important. That, of course, is ludicrous, since he’s the president’s top national security aide.

It’s also shocking, as top officials typically back whatever the president does in public. In this case, Bolton didn’t trash Trump’s view, but he slyly noted that they don’t share it.

This episode highlights the stark divisions within the Trump administration about North Korea. Clearly, Trump thinks holding summits with Kim is a good thing, allowing him to gauge the despot and press him to make some kind of deal.

Bolton, however, has long argued that Pyongyang will never end its nuclear program and that the US should instead consider attacking the Kim regime. Palling around with the North Koreans last week, then, was surely not Bolton’s idea of a good time.

He was right to note that Trump ultimately decides what course the US should take, and Bolton works to ensure the president’s wishes are carried out. But if Trump starts to sour on talks with Kim, Bolton will be just a phone call away to offer him his own views.

Trump blames Democrats for no deal in Hanoi

It was widely expected that Trump and Kim would strike a deal in Vietnam that included the US lifting some sanctions in exchange for North Korea dismantling part of its nuclear program. That didn’t happen, and Trump has a theory why.

No, it’s not that North Korea is unlikely to ever get rid of its nuclear weapons. And no, it’s not that neither side did the requisite staff work to prepare an agreement ready for the leaders to sign. It’s actually something else, Trump said on Sunday: the Democrats.

For the Democrats to interview in open hearings a convicted liar & fraudster, at the same time as the very important Nuclear Summit with North Korea, is perhaps a new low in American politics and may have contributed to the “walk.” Never done when a president is overseas. Shame!

Trump’s argument, then, is that the congressional hearing with Michael Cohen that took place during the summit led Trump not to sign a deal with Kim. But we know that’s not true.

As the New York Times reported on Saturday, Trump made a big ask of Kim: If he shut down all his weapons programs — nuclear, chemical, and biological — then the US would remove all relevant sanctions from North Korea. Kim rejected that deal, and both leaders stopped the talks before a planned lunch and signing ceremony.

But pretend, for a moment, that Trump was telling the truth. What he would’ve just admitted is that he couldn’t focus on one of the biggest diplomatic moments of his presidency because of what was happening back home. That’s quite a shocking — and frankly damning — comment made by someone who claims to be the world’s best dealmaker.

Perhaps we should await Trump’s newest book: The Art of No Deal.