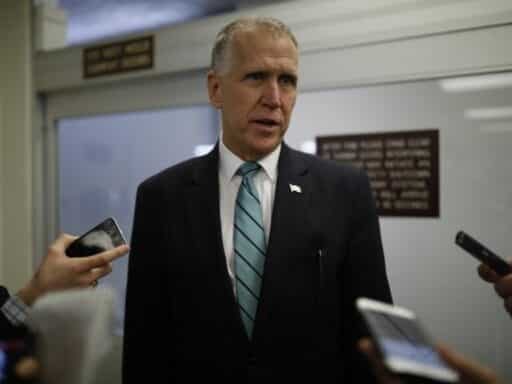 Next week, the latest lawsuit that could overturn all or much of Obamacare will come before a federal judge. In that case, brought by Texas and several other states, Trump’s Justice Department argued that the law’s protections for preexisting conditions should be invalidated now that the individual mandate has been repealed. Texas wants the entire law thrown out.

It’s clear the litigation has made Republicans in Congress nervous. Democrats are already running heavily on health care for the midterms, and a Trump-endorsed lawsuit that threatens Obamacare’s most popular provisions will only add more fuel to that fire.

So late last week, a handful of Republican senators introduced a new bill that they hope will defuse those attacks if the federal courts rule against Obamacare and put the law’s preexisting conditions rules in jeopardy just before voters head to the polls.

The 10 GOP sponsors, led by Sen. Thom Tillis of North Carolina, said the legislation would guarantee protections for people with preexisting medical conditions.

But that doesn’t appear to be entirely true — or, rather, it’s only half the story.

The Republican bill would continue to prohibit insurers from denying people coverage or charging them higher premiums based on their medical history, just as Obamacare does now. In that sense, the bill would preserve a guarantee of access to health insurance.

But a closer read reveals a huge asterisk to that supposed guarantee. Legal scholars have pointed out that the Justice Department’s argument would invalidate not only the prohibition on denying people insurance or charging them higher premiums based on their medical history, but also the federal rules that forbid plans from excluding coverage for preexisting conditions.

In that case, even under this bill, insurers could be permitted to refuse to cover services related to a person’s preexisting conditions. In other words, you would be guaranteed a health insurance plan — but that plan wouldn’t have to cover the services you might need most.

That would be a gigantic hole in the protections that Republicans say they want to preserve.

For some people, maybe this isn’t a big deal. If you have asthma, for example, you might have to pay more money out of pocket for your inhaler, but you would still be protected if you broke your arm or got pneumonia.

But what if you have a cancer diagnosis and now your health plan isn’t obligated to cover your treatment?

”If you were just diagnosed with cancer and needed tens of thousands of dollars of chemotherapy or an expensive surgery, an insurance policy that covered everything but your cancer would feel pretty much useless,” Larry Levitt, senior vice president at the Kaiser Family Foundation, told me.

I had hoped to answer with a little more specificity how much of a person’s typical health care costs results from their preexisting conditions. It turns out that is a very hard question to answer.

This CMS risk adjustment report is a useful starting point, though, for even beginning to comprehend what new health care costs patients could face. It shows us how expensive different conditions are, in comparison to average Obamacare premiums.

Those numbers are hypothetical, to be clear, but you get the idea. Americans could be on the hook for tens of thousands of dollars if their health insurance no longer has to cover their preexisting conditions.

”This bill provides [the] appearance of protecting people with preexisting conditions, but not the reality,” Levitt said.

I asked Tillis’s office about this critique. They pointed out two things: one, that their bill is not intended to be a comprehensive response in the event that the entire health care law is struck down; and two, that their bill was not invalidating any part of Obamacare but rather seeking to reaffirm their support for protecting preexisting conditions.

This twenty page bill is not comprehensive health care legislation. It also does not strike down or change any provisions in the Affordable Care Act. This legislation protects Americans with pre-existing conditions so that they cannot be denied coverage or charged more based on health status – two of the central protections contested in Texas vs. United States. In the event that the Affordable Care Act is struck down in its entirety, Congress would put forward a more comprehensive response.

None of this might matter in the end. Legal scholars on the right and left have told me they think the Texas case is “absurd.” Even if a federal judge rules against Obamacare in the lower courts, that decision is not likely to take immediate effect.

But the clear lesson of the Tillis bill is that Republicans know they must be careful with preexisting conditions, especially with mere weeks before the midterm elections.

Those protections have been around for too long, and become too popular with the public, for the GOP to not at least attempt to defend them. Joining Tillis on the bill was Nevada’s Dean Heller, the most vulnerable Senate Republican incumbent up for reelection this year.

Amazon will now let you pay with your palm in its stores
Did the coronavirus get more deadly? The death rate, explained
“A semi-truce”: Trump makes an EU deal to avoid a trade war
The racial pessimism of Clarence Thomas
5 winners and 2 losers from night 3 of the Democratic convention
Amazon’s Alexa-powered ambitions contradict its promises to protect your privacy