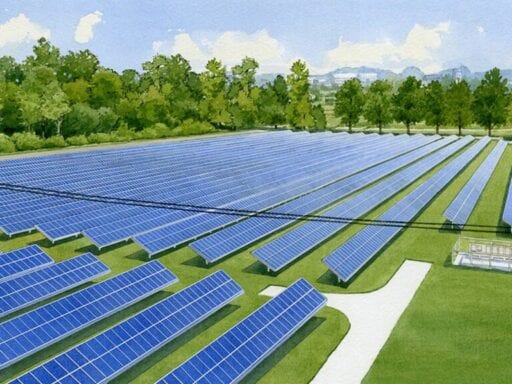 This story is part of Covering Climate Now, a global collaboration of more than 250 news outlets to strengthen coverage of the climate story. This piece was originally published in July.

According to the climate scientists at the IPCC, the world needs to transition entirely to clean energy by midcentury. It’s one reason that at least thousands, or perhaps millions, of kids and adults are protesting Friday as part of the Global Climate Strike.

The transition is underway — but getting all the way there is a daunting goal that will require researching and developing new products and services, especially in fossil fuel-intensive industries like concrete- and steel-making that have largely been neglected.

I believe, or at least hope, that this absurd fight is behind us. The dire urgency of the climate crisis and the scale of the task ahead lay bare the obvious answer: We need both deployment and innovation. Lots more of both. We are doing nowhere near as much as we should of either one.

Having reached that rapprochement, I think it’s time for fans of deployment — a class in which I include myself — to take a fresh, non-defensive look at the argument for innovation. It really is important!

This is on my mind because of a new report issued by a group called Let’s Fund, which applies the principles of “effective altruism” in guiding donor money to good causes. The group took a close look at climate change and came to a fairly stark conclusion: The best place to put donor money is in innovation. Specifically, the group is recommending that donors support the Clean Energy Innovation program at the Information Technology and Innovation Foundation (ITIF), a US think tank.

Obviously (as the researchers freely admit), metrics like this involve all kinds of value judgments, particularly when it comes to political economy. Putting clean energy subsidies at No. 10 irks me to no end. (Want to stimulate some innovation? Deploy at scale!)

But I’m going to just focus on Let’s Fund’s core argument for public spending on clean energy R&D, because, however you might rank it relative to other policies, it is unquestionably both neglected and vital.

2) Thus, “the best climate policies are those that stimulate clean energy innovation.”

How can advanced economies induce emerging economies to develop along the cleanest possible lines? Restraints on growth imposed by international institutions are doomed to failure. The only thing that might work is making clean energy cheap and then sharing it with those economies (technology “spillover”). Cheaper clean energy technology is a global public good, and advanced economies are both morally obliged and economically well-positioned to provide it.

3) Public R&D creates the most spillover.

Just $22 billion a year is spent globally on clean energy R&D. That is a pittance — a drop in the bucket of the $600 billion in annual military spending in the US alone.

And pretty much any advanced economy could substantially, and unilaterally, increase that number. That’s why the researchers call it tractable; it doesn’t require international coordination. Anyone can just go ahead and do it.

They note that a country like Germany could eliminate its production-based emissions entirely and it would scarcely make a dent in global emissions, whereas, for a tiny fraction of the cost, it could unilaterally double the global clean energy R&D budget and stimulate far more innovation, with arguably greater impact.

The report strays several times into the innovation versus deployment trap, but I think the case for public R&D stands independently. There’s no need for any country to spend less on deployment. But every single country should spend more on R&D.

Everyone loves clean energy R&D no one does it

Mission Innovation, an international effort to coordinate and accelerate clean energy R&D, was launched with much fanfare in 2015. So far, 24 nations and the European Commission have pledged to double their R&D spending. However, few countries are on track. It looks like they will average about a 50 percent increase.

This has always been the strange thing about public clean energy R&D. As the report says, policies that stimulate innovation “do not necessarily require international coordination, are under-supplied, and can have large global spillovers.” Innovation is perhaps the one climate policy that virtually everyone agrees on, across the ideological spectrum. Even US Republicans support it, at least notionally.

But despite almost everyone agreeing on it, almost no one really does it, at least not at the scale it warrants. It is perpetually underfunded, long past the time when it was clear that clean energy is vital to a safe human future.

I don’t think anyone has a full and adequate explanation for why that is the case. There is, of course, the free rider problem — everyone benefits from R&D eventually, no matter who pays for it — but free rider problems abound in climate policy, and R&D seems uniquely overlooked.

The report also cites “action-omission bias” as a culprit: “Emitting carbon directly ourselves is perceived to be morally worse than not taking action to reduce emissions caused by others — though the consequences are the same.”

In terms of climate change, morally speaking, one ton of carbon emissions prevented is equivalent to any other, no matter where it is located. And in terms of local pollution and social damage, a ton prevented in emerging nations is worth more, likely to alleviate more suffering.

Both arguments suggest that, to the extent that global emissions can be prevented at scale by public R&D, more countries ought to step up. If it is to address a global problem, any true Green New Deal must adopt a global focus. And making clean energy cheaper and more available is one thing any wealthy country can do to have a global impact.

Game of Thrones took over Bud Light’s Super Bowl commercial
Watchmen dives into the past in an episode unlike any other in TV history
Why Iran won’t talk to Trump, explained in one paragraph
The importance of Elijah Cummings’s fight for voting rights
This week in TikTok: A viral song sums up brands’ BLM posts
Most cancer drugs fail in testing. This might be a big reason why.